Did German citizens need a visa to enter Switzerland in 1945?

I'm researching a story that plays in Europe immediately after the end of World War II. There is a character who

in 1945 (after the capitulation of Nazi Germany) because she does not want to live under the occupation of the Allies.

Would this person need a visa to legally get to Switzerland? Were there any privileges for German refugees (civilians fleeing from Eastern Germany)?

No visa was needed to enter, strictly speaking. But it would be needed to enter legally and for staying there. There were no privileges for Germans from anywhere, but privileges for people citing a reason the Swiss accepted and for people having documented ties to people in Switzerland. Just hailing from Soviet occupied Germany would likely be not particularly high on the list of accepted reasons. 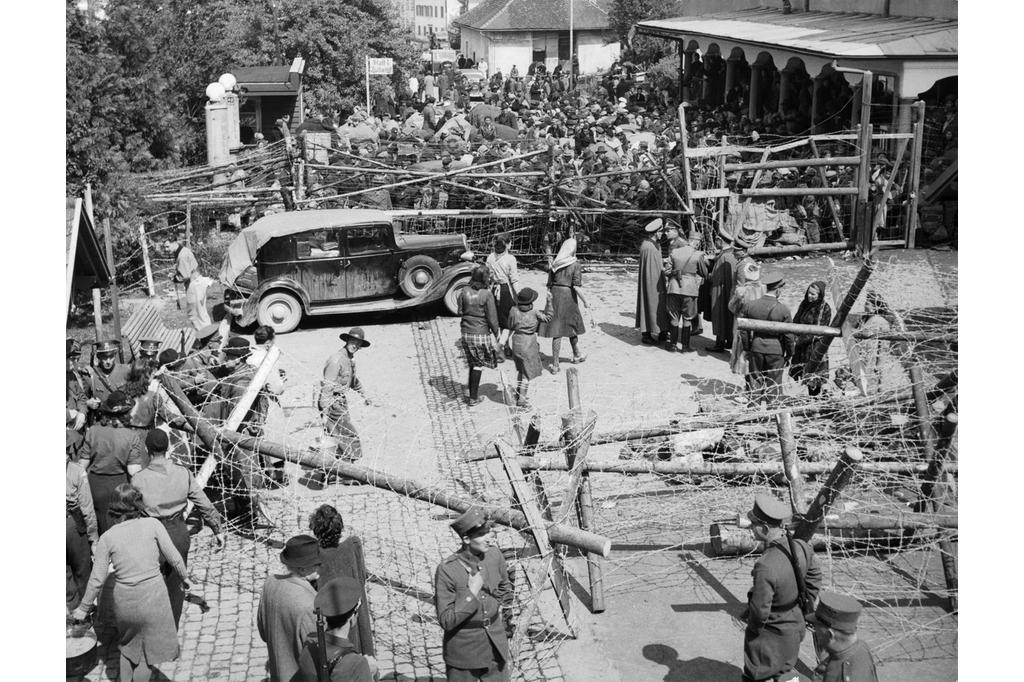 Werner Bischof: The town of St Margarethen at the Swiss-German border on May 3, 1945: Prisoners of war and forced labourers wait to cross into Switzerland
(How Magnum photographers see Switzerland)

This photo is in some contrast with the following:

Refugees
As a neutral state bordering Germany, Switzerland was easy to reach for refugees from the Nazis. However, Switzerland's refugee laws, especially with respect to Jews fleeing Germany, were strict and have caused controversy since the end of World War II. From 1933 until 1944 asylum for refugees could only be granted to those who were under personal threat owing to their political activities only; it did not include those who were under threat due to race, religion or ethnicity. On the basis of this definition, Switzerland granted asylum to only 644 people between 1933 and 1945; of these, 252 cases were admitted during the war. All other refugees were admitted by the individual cantons and were granted different permits, including a "tolerance permit" that allowed them to live in the canton but not to work. Over the course of the war, Switzerland interned 300,000 refugees. Of these, 104,000 were foreign troops interned according to the Rights and Duties of Neutral Powers outlined in the Hague Conventions. The rest were foreign civilians and were either interned or granted tolerance or residence permits by the cantonal authorities. Refugees were not allowed to hold jobs. Of the refugees, 60,000 were civilians escaping persecution by the Nazis. Of these, 26,000 to 27,000 were Jews. Between 10,000 and 24,000 Jewish civilian refugees were refused entry. Although Switzerland harboured more Jewish refugees than any other country, these refugees were refused entry on the grounds of already dwindling supplies. Of those refused entry, a Swiss government representative said, "Our little lifeboat is full." At the beginning of the war, Switzerland had a Jewish population of between 18,000 and 28,000 and a total population of about 4 million. By the end of the war, there were over 115,000 refuge-seeking people of all categories in Switzerland, representing the maximum number of refugees at any one time.

It seems that the refugee policy progressively tightened up:

At precisely the time when Germany started deporting the Jews from Western Europe to concentration camps (August 1942), Switzerland announced that it was closing its borders: "Refugees fleeing on racial grounds, such as Jews, are not entitled to political asylum." This move led to intercessions by religious leaders among others, and to a parliamentary debate which ended in the Federal Council moderating its decision somewhat. As a result, the sick, pregnant women, those over 65, and children under 16 travelling alone, as well as parents with children under the age of 6, and people with close relatives in Switzerland were not to be turned back. It is estimated that during the war some 20,000 Jewish refugees were turned away at the border and around 10,000 visa applications were refused.
Switzerland during the war years (1914-1945)

While anyone might have entered illegally across the green border, staying there would require official documentation. For that you would need a visa first and then apply for the rest of the documents needed to match the plans for the future. You might even just show up at the border, accepting the risk to be turned away immediately – or let in.

That is the official way. More interesting is of course the obtainment of papers through the help of Fluchthelfer or Passeure: Swiss people, from ordinary or criminal forgers to humane officials making exceptions or falsifying documents.

Swiss people who provided escape assistance against the laws of the time were punished and only rehabilitated much later: As Swiss Vice Consul in Budapest, Carl Lutz saved more than 60,000 people - around half of all surviving Hungarian Jews - from Nazi extermination by illegally issuing papers that enabled them to leave for Palestine. After the 1995 verdict against Paul Grüninger, who died 23 years earlier and was convicted as police chief in St. Gallen in 1940 for "violation of his official duties" was reversed, the Swiss parliament passed its own rehabilitation law for escape helpers from the Nazi era. Since then, more than fifty convicted Passeure from the period between 1933 and 1945 have been rehabilitated. However, according to research by the weekly WoZ, only two of them underwent rehabilitation.

A very nice anecdote found in the official report of the UEK reads as follows:

Translation: On 22 August 1942, Eduard Gros crossed the border with Switzerland together with Hubert and Paul Kan near Geneva. Shortly after their illegal entry, the three stateless Jews were arrested by the Geneva army police, taken by car to the German customs post on Swiss soil in La Plaine and sent on foot to the border with occupied France. When the refugees saw the German border police, they jumped into the Rhone and swam back to the Swiss shore. There they desperately begged for asylum. Without success. One of them tried to open his arteries. Courteous of his suicide attempt, Swiss border guards and soldiers dragged the three men clamped together away from the shore to hand them over to the German officers standing by. However, the extradition proved unfeasible. In order to avoid sensational incidents, Daniel Odier, police officer of the Geneva Territorial Circle, agreed with the German border officials to officially hand over the refugees on the territory of occupied France. There the three Jews were arrested by the German border police and - as other refugees later reported - taken to Gex prison. On September 18, 1942, Eduard Gros, Hubert and Paul Kan were deported to Auschwitz via Drancy, a drastic example of the difficulties and risks of crossing the border. For a successful escape, persecuted people were dependent on the assistance of third parties due to the limited escape possibilities, visa requirements and border closures. For the immediate crossing of the border, the refugees often had to entrust themselves to a person familiar with the local conditions - a so-called Passeur - to whom they were subsequently subjected for better or worse. The plight offered the refugees no security - neither protection against robbery and blackmail nor from being abandoned or even denounced by the passeur after payment had been made. And even after crossing the border the danger was still not over, since the Swiss authorities had extended the border area up to 12 km inland and refugees caught in this strip had to reckon with the rejection. Jean-François Bergier: "Die Schweiz, der Nationalsozialismus und der Zweite Weltkrieg: Schlussbericht", 2002.

While from 1938 up to 1942 these laws and practices progressively tightened up, there was a small window of relatively lowered restrictions. From July 12, 1944 on a new directive was issued to allow anyone in who was "who are truly endangered to life and limb." ( „die an Leib und Leben wirklich gefährdet“ waren). A few thousand people seemed to have benefitted from this policy. That does not mean that border controls were somehow laxer. This is only a relative relaxation: not everyone was let in, still. To the contrary: this was issued in parallel with further restrictions to ensure that no known Nazis or war criminals were allowed to enter. This can almost be called a "window of opportunity" (with caveats), but this was closed again with ever tighter re-instated visa-requirements – with much fewer exceptions in practice – on May 22, 1945. (Source: Guido Koller & Heinz Roschewski: "Flüchtlingsakten 1930–1950 – Thematische Übersicht zu Beständen im Schweizerischen Bundesarchiv", Schweizerisches Bundesarchiv: Bern, 1999., p 23.). Until 1947 these rules remained very strict when they were slowly and in several steps relaxed again, no less because the central/federal offices gave back the handling of migrants and refugees to the canton-level.

50
Why were there no Internment camps for German-American Citizens in USA during WW2?
18
Have Germany and Poland ever signed a peace treaty after WWII?
10
Was the Soviet Union in 1945 seeking to capture German soldiers and civilians, or drive them west?
7
German submarine force ceasefire on May 4 1945
30
Why did Switzerland not grant votes to women until 1971?
12
Who advised FDR on foreign policy before and during WWII?
2
Why were Red Army Officers and soldiers not prosecuted for War Crimes in WWII?
11
What transit restrictions were in place in Occupied Germany limiting military and civilian movement between the four occupation zones?