Is there any good reason to call the German Emperor “the Kaiser”, implying something uniquely German about him?

It is common, in History-Channel-Grade English language documentaries at least, to refer to German emperors, and William II in particular, as "the Kaiser". This is just the German term for emperor though, and it is used in this exact way in Germany.

Why is "Kaiser" used for German emperors, but the English word "Emperor" is used for other (non-English) emperors? (e.g. Chandragupta, Napoleon and others)

(Note that the question may be based on a false premise; as noted in the referenced article, Napoleon was "Imperator", the emperor of the Bulgarians was "Czar", the emperor of Spain had a Spanish title; I'm not sure how the History Channel grade documentaries refer to them.)

This is indeed a hold-over from he propaganda of the First World War. Although the term started its career earlier.
Compare the official definition for Kaiser on the Wikipedia disambiguation page:

Kaiser is an imperial title meaning "emperor", which is mainly used in German language; in late antiquity, the German Kaiser emerged from the Latin caesar.
Kaiser may also refer to:

As a personal addition, Germans refer to most big rulers as kaiser as well. The Kaiser Augustus of the Roman Empire and the Kaiser of China just being further examples (also note the intricacies in MAGolding's answer).

Although the actual lemma for Kaiser says:

In English, the term 'the Kaiser' is usually reserved for the emperors of the German Empire and the emperors of the Austrian Empire. During the First World War, anti-German sentiment was at its zenith; the term the Kaiser—especially as applied to Wilhelm II of Germany—thus gained considerable negative connotations in English-speaking countries.

But if you compare the pages for Wilhelm II and Franz Joseph I you will again notice that Wilhelm has Kaiser informally attached as a middle name whereas Franz Joseph does not have this title. Just count the appearances of Kaiser in both articles. Evidently the Austrian emperor is seen not nearly as bad as the German one. Using Kaiser to describe the Holy Roman Emperor seems even rarer.

From a linguistic view it seems quite peculiar to narrow down the meaning of kaiser to just one individual. But this is explainable when looking at the historic praxis leading to the current situation.

Wilhelm was pictured as a devil, literally, as pars pro toto for all Germans n World War I: 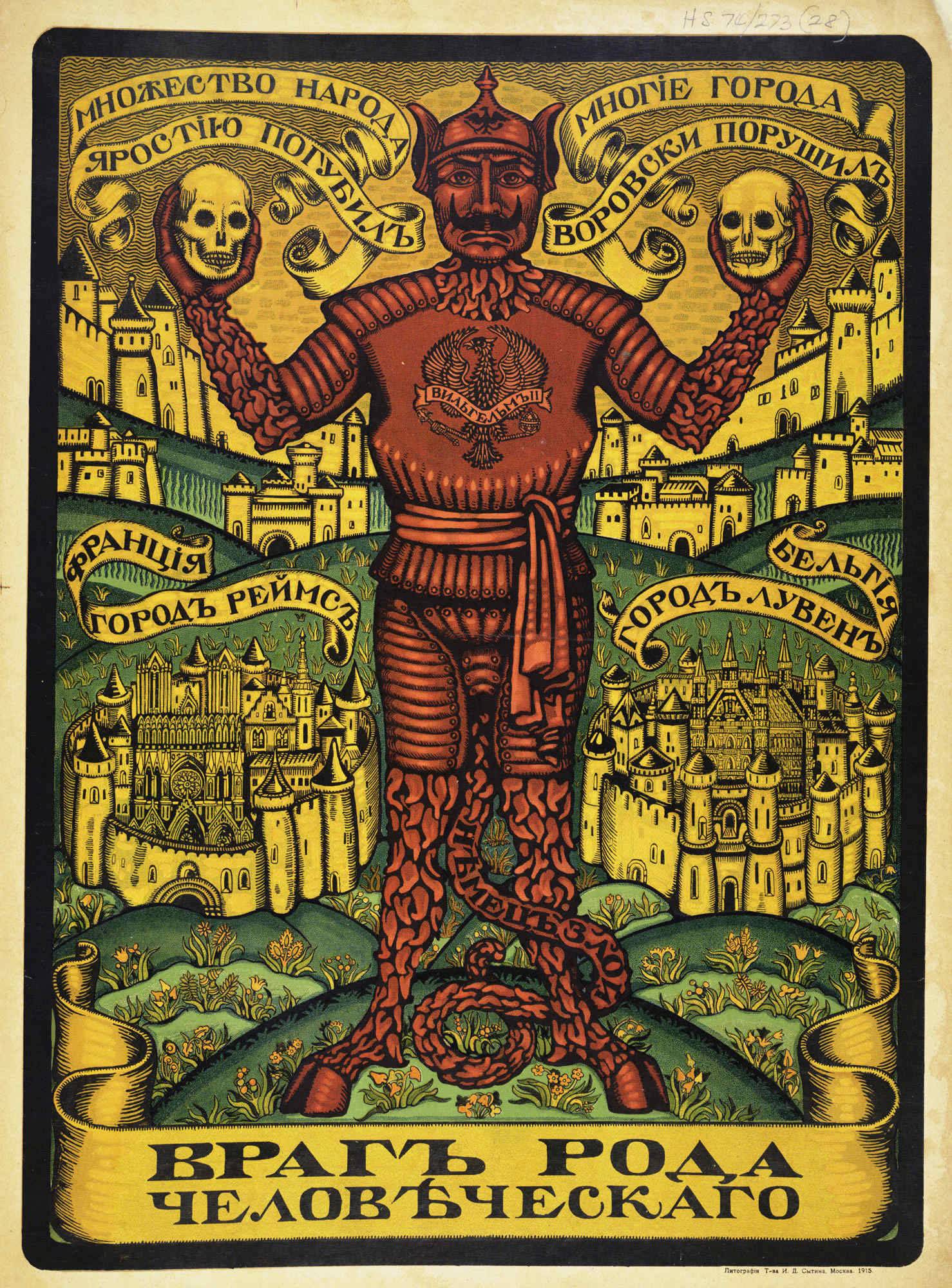 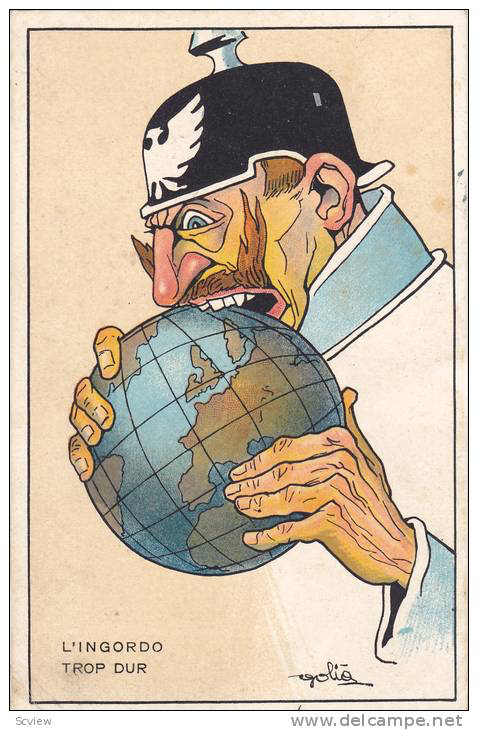 No opportunity is missed to portray the Kaiser as an awful monstrosity: the glaring eyes, the sharp teeth, the angrily flaring ends of his upturned moustache.
The German word for Emperor, like the Russian Czar, derives from the Roman Caesar. It retains its particularly negative connotation from World War I, and hence usually applies to Wilhelm II (less to his only predecessor as Emperor of unified Germany, Wilhelm I; or the Emperors of Austro-Hungary).

From the propaganda article linked above:

Christopher Sykes, published an article about it in the Radio Times. He admitted that in his boyhood, even the mention of the Kaiser sent "tremors of appalled horror through my nerves." This was not unusual for any Briton who grew up during the era of the Great War. The myth of the wicked Kaiser had been propagated so relentlessly by British historians and newspapermen, even otherwise intelligent statesman reacted with revulsion when they heard Wilhelm's name.

But naturally, all things history are usually a bit more complicated than that:

[…] Wilhelm became a ‘representative individual’, whose personal characteristics were generalized to the entire German population. After 1914 cartoons descended to the basest and blood-thirstiest character assassination, reminiscent of modern-day horror comics, […]
Britain’s Ministry of Information even commissioned cartoon films, initially to lampoon the Kaiser, but escalating to a vicious anti-German hate propaganda to bolster war morale on the home front.[…]
As far as the British public was concerned, in a burgeoning period of media awareness, Emperor Wilhelm II was undoubtedly one of the best-known and most intensely scrutinized crowned heads of Europe. Part of this was naturally a political reflection of concerns over Weltpolitik which potentially threatened British colonial interests and naval supremacy. But it was due also to Wilhelm’s strong personality and his close relationship with the British royal family, and thus was an early manifestation of the cult of celebrity in the British press. When the Kaiser spontaneously arrived at the death-bed of his grandmother, Queen Victoria, in 1901, for instance, his impulsive action was generally praised.
One of Britain’s first tabloids, the Daily Mail, notorious for its imperialistic and xenophobic tone, and hardly ever gracious to foreigners, recorded: ‘[Wilhelm’s behaviour] has contributed to the cause of peace and good-will, because by our admiration and respect for the Kaiser we are brought nearer to Germany. Never was a foreign Sovereign so popular in England as is her masterful ruler to-day’.[…]
William II is said to hate England and Englishmen’. On this view, the Kaiser belonged in the same camp as the long-standing bogeyman of Victorian liberal opinion, Tsarist autocracy: ‘His love is for the Russian government and his evident tendency is towards Russian brutality, torture and suppression of all advanced thought’.[…]
At the same time, an indication of the familiarity Wilhelm achieved in Britain during these first years was the adoption into English of the German word Kaiser. As the Oxford English Dictionary attests, and contemporary British papers and magazines confirm, Emperor Wilhelm II became more often simply ‘the Kaiser’. Neither his grandfather nor his father had achieved this distinction. In the following years adjectives such as ‘kaiserish’ (1897) and ‘kaiseristic’ (1905) were created to denote actions performed in an energetic, flamboyant and impulsive manner.
From: Lothar Reinermann: "Fleet Street and the Kaiser: British Public Opinion and Wilhelm II", German History Vol. 26, No. 4, pp. 469–485, 2008, doi:10.1093/gerhis/ghn046

Looking into the opposite direction: English speakers refer to "the kaiser" as the enemy, using this adopted word often with a derogatory sense but almost always referring to only Wilhelm II. German speakers refer to "the Queen" as almost exclusively to Elisabeth II, carrying only very seldom a negative connotation – directly, for that particular person. Most usage for the anglicism is found in royalty obsessed yellow press articles and therefor indicates usually a quite poor quality textual product.

Using this very loaded designation kaiser today once seems necessary to signal that any author knows the vernacular surrounding the subject matter. Using that word more than once in any history text indicates bad taste, bad journalism and clichéd mannerism in style and the continuation of war time propaganda stereotyping. Although, some may try to indicate that a genuine German word might spice up or even scare up any impact of any text or show some foreign language skills. Insisting to always use this word remains on the level of the play The Kaiser, The Beast of Berlin.

In summary, there is a very good reason to use "the kaiser" to refer to only the third German Emperor, Wilhelm II, in a text about his times, but only very sparingly and ideally with a little explanation of the origins and history of that word usage. Failing both, the parsimony in usage and explanatory context would answer the question in the opposite direction. The tainted connotations and propagandistic intent to demonise both the "barbaric" German monarch and through him the Huns and Boches as well make an unreflected and exclusive use of kaiser quite devoid of "any good reason".

I point out that kaiser is the pronunciation of the Latin name and word Caesar.

Of course the full title of a Roman emperor would be more like a phrase Imperator Caesar Augustus than a single word like Imperator, Caesar, Augustus, or Princeps.

The Holy Roman Emperors were called kaiser in German. But in Latin the title of someone elected emperor but not yet crowned emperor in Rome by the Pope was Rex Romanorum et semper Augustus, "King of the Romans and always Emperor/Imperial?" and the title after coronation by the Pope was Imperator Romanorum et semper Augustus, "Emperor of the Romans and always Emperor/Imperial?".

The Russian Emperor is usually called the Tsar. The king of Bulgaria also used the title of Tsar, though it was translated as king and not as emperor.

In the Middle east, the Roman and "Byzantine" emperors were called Kaiser-i-Rum, "Caesar of Rome" by speakers of Semitic and Iranian languages. Thus the Seljuk Sultan-i-Rum claimed to be "Sultan of Rome". So when Queen Victoria took the title of Empress of India it was translated as Kaiser-i-Hind, "Caesar of India".

In the 1960s, an issue of the comic book Magnus Robot Fighter translated Derkaiser as "The Dictator".

Kaiser in German is like Czar in Russian. Both mean emperor, both are derived from Caesar. Would the History Channel call the Russian emperor Czar or Emperor? I think Czar.

You mentioned yourself the Bulgarian Czar. I would expect most American audiences to connect the title Czar with the Russian emperor.

Not the answer you're looking for? Browse other questions tagged world-war-one imperial-germany or ask your own question.

40
In the “Christmas truce” of 1914 were there any football (soccer) matches between British and German troops?
5
Were there attempts to rename the French language Prussian order Pour le Mérite, why was it never Germanised?