Several years ago, I purchased a copy of A.W. Wheen's English translation of Erich Maria Remarque's Three Comrades (published, as best as I can tell, sometime in 1937 by Hutchinson & Co. of London, England) at a second-hand bookstore in Canada (rather oddly, not in Toronto, but in Guelph). On the first (blank page), there are two things, one of which is of interest in the context of this question: a partially-torn sticker, seemingly applied by the bookseller, as seen below: 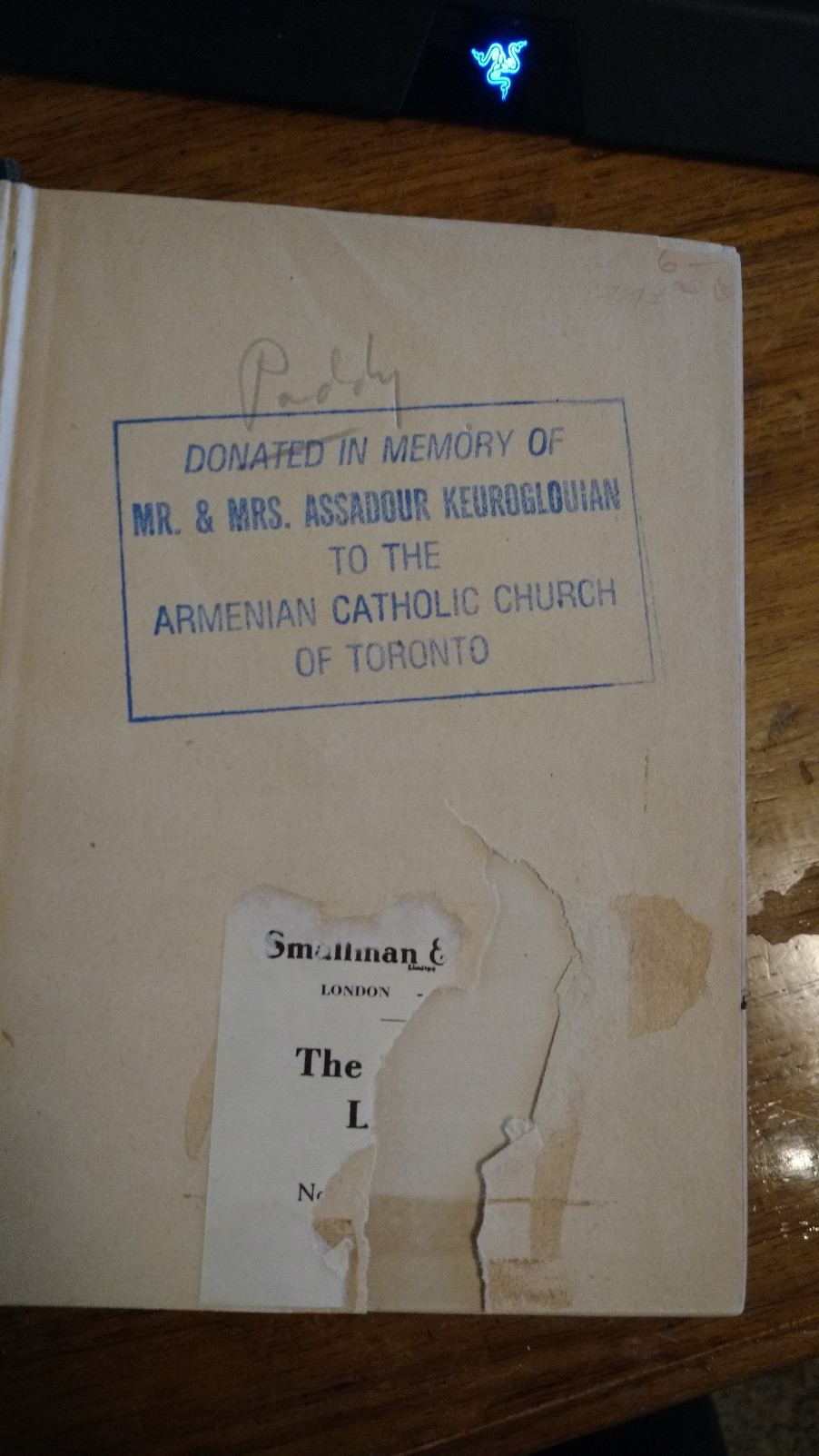 Now, I'm assuming this indicates London, England, but it could just as easily be London, Ontario given where this particular copy has clearly spent the better part of its history. So, the real question is this: does anyone know anything about Smallman & <blank>, Limited, proprietors of an unknown business in London?

Bonus points (i.e. a small bounty) will be awarded if you can tell me anything about the Keuroglouians of Toronto, in whose memory this book was donated.

The position of "Limited" in relation to "Smallman &" does resemble the "Smallman and Ingram" logo, for example on their catalog. While John Smallman and Lemuel Ingram started their retail store with a specialty in clothing, they quickly expanded to carry other dry goods, as both had experience working in the market. The business was based out of London, Ontario. The original location was at 147 Dundas Street in 1877. Smallman created Smallman & Ingram Limited in 1908, after the death of Ingram in 1901. He did bring Ingram's family into the business.

In 1944, Simpson's of Toronto bought them out, but Gordon Ingram (son of Lemuel) remained as chairman. The store is now known as Market Tower.

The most I can tell you about the Keuroglouians is that the Armenian Catholic Church of Toronto was established in 1972. At the least we can say that they donated this book well after Smallman & Ingram Limited was bought out.

Updated 9/19/2019: After a long time of searching, I was finally able to find what may be the funeral home record of Mr. Keuroglouian. No obituary is provided, but the funeral home is Donohue Funeral Home in London, Ontario. If this is the right person, he lived from 1903-1996. Also, I may have found him in Canadian voter records, along with a Mrs. Mabel Keuroglouian (possibly his wife's name?), but I don't have paid access to Ancestry.com to take a closer look at the record.

Not the answer you're looking for? Browse other questions tagged identification book canada london or ask your own question.

2
Why is the Bishopric of Canterbury located in London?
2
Who is this person?
3
Who governed London during the Great Plague?
3
Who lived on Golden Square in London in the 18th century?
8
Any idea what type of 1920-1930s tank this is?
2
Who is this Asian figure?