Why do the pyramids show less erosion than the Sphinx?

Traditional Egyptology maintains that the Great Sphinx was carved around the same time that the Great Pyramid was constructed. I am relatively new to Egyptology but it seems clear that the base of the Sphinx (beneath the restoration masonry), the enclosure walls, and the blocks of the Sphinx temple are notably more eroded than the blocks of the pyramids. What explanation is given for this assuming these structures are made of the same type of stone? Especially as the pyramids are much taller, shouldn't they be exposed to more wind erosion, not less?

Is the Sphinx carved of softer stone? Is it because the pyramids were once covered by harder cover stones which protected them for much of their history?

The Giza pyramids originally had a white outer shell of polished limestone. In other words, what you are seeing is not the eroded remnants of the original surface, but rather the underlying structure behind the casing stones. To get a sense of the past splendour of these monuments, look at the remaining stones in the upper portions of the Pyramid of Khafre. 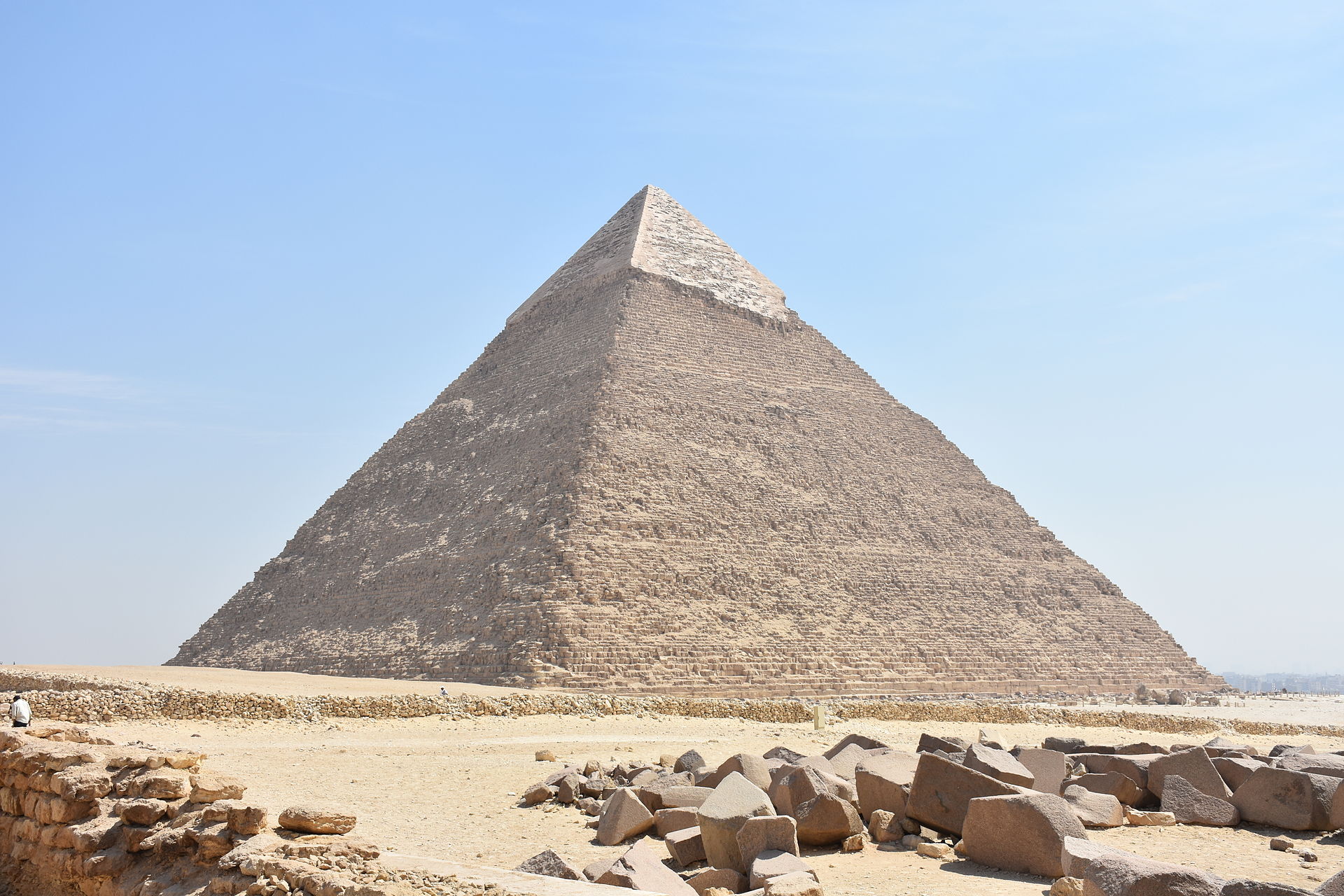 While almost all of them are gone today, most of these casing stones were apparently still intact until just centuries ago. Wikipedia mentions that the Great Pyramid lost much of its casings in a 14th century earthquake, and was mined for the rest in the 19th century. Likewise, the Pyramid of Khafre retained a complete outer shell at least until 1637, when John Greaves remarked that:

the sides are sooth, and equal, the whole fabric (except where it is exposed to the south) seeming very entire, free of any deformed ruptures, or breaches.

So it's no wonder that the now-exposed stone blocks underneath show less signs of erosion than the Great Sphinx. The latter had been subjected to the elements for much longer.

The base of the Sphinx is soft stone, and has been eroded. But is it really so much worse than the Pyramids? It’s much smaller. A chunk of equal size falling off the Sphinx will seem more damaging than if it fell off a pyramid.

Also, the Sphinx has a damaged face due to vandalism.

Plus, as pointed out, the Pyramids originally had a gleaming white outer shell.

Amy Dee DempsterAmy Dee Dempster
19911 bronze badge
1
Add a comment  |
7
Want to improve this post? Provide detailed answers to this question, including citations and an explanation of why your answer is correct. Answers without enough detail may be edited or deleted.

In addition to that, despite the erratic characteristic of rainfall in the region, the slope of the pyramid helps running off water faster than the flat design of the Sphinx.

According to geologist Robert Schoch, PhD, the serious erosion on the enclosing walls of the Sphinx were formed by centuries of heavy rainfall, which weather hasn't been present at any point during the currently accepted time-frame within which the Sphinx was carved. From a purely geological perspective, the Sphinx or at least the enclosing walls must have been carved sometime at the end of the last ice age, at least to have endured that level of rain erosion.

As we see with some South American pyramids and other megalithic structures, ancient architects, engineers, and builders would build newer structures on top of preexisting structures, such as pyramids that were built on top of and integrated older pyramids. There are a few spots in the Giza plateau that have clearly visible different strata of masonry of vastly distant age; masonry with erosion comparable to the currently visible erosion on the New Kingdom buildings directly atop masonry that is centuries if not millennia older and is extremely eroded and worn. The point here is that while we might date the exterior of the Sphinx, pyramids, or other structures, if we don't verify a continuity of age throughout the structures, we might be incorrectly assuming X site is entirely Y years old because of dating done on the most recent masonry or other construction/refurbishing at the site. Many people are convinced that the Giza plateau is vastly older than we currently accept and that the current construction is mostly rebuilding or refurbishing on top of an older site.

Here's Dr. Schoch's brief page about it on his site: http://www.robertschoch.com/sphinx.html

20
What kind of labor was used to build the Egyptian pyramids?
6
Are parts of the Sphinx older than 5000 years?
15
Did the Ptolemaic Egyptians know how old the Pyramids were?
10
Are the pyramids too old?
7
Great Sphinx photo from WW2 shows a big platform under the chin
2
What is under the Great Sphinx of Giza?