Did Ancient China use lead in their food/water industry as much as the Romans?

The Romans used lead a lot. Water pipes might be the most famous, but there were lead plates and lead vessels to prepare food or drink too.

Apparently lead was an inevitable byproduct of silver refining, because the silver mines had galena ore (lead-silver ore). So it became common due to its cheapness and didn't corrode easily.

So what I want to know now is, did Ancient China also use lead in the same ways and to the same degree? Did they have lead water pipes? Lead vessels?

The time period I'm interested in is 500 BCE to 500 CE, which is roughly the time of the Western Roman Era (Republic + Empire).

From a purely numerical perspective of quantifying "often" or "much" we observe that Western lead production peaked in Roman times and fell off sharply afterwards, whereas Chinese lead production was always lower than 'European' rates but kept its level into the 'Barbaric ages'. 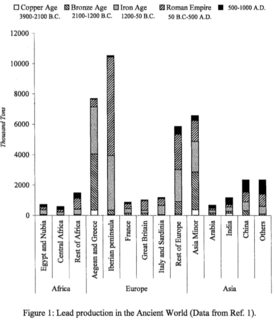 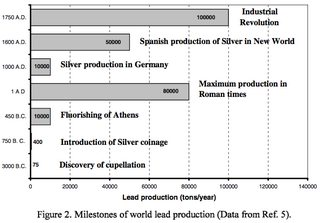 In China bronze vessels and coins had a higher lead content than Western objects in that style, ranging from 20–60% in lead in coins and leaded glass could contain up to 30%. Others uses were solder for joining metals, pewter, pigments, especially for paints, namely in the cerussite. Especially noteworthy is the use in cosmetics mostly a white lead fasce paint, and even medicinal concoctions.

It is well known that many ancient Chinese bronze artifacts, like the coins of Imperial Athens and some old Hittite bronzes, contain lead, sometimes a very large amount, even to the total exclusion of tin. These include vessels and weapons thought to belong to the Shang period, and many objects, including mirrors and coins, of the late Chou Dynasty. "Bronzes" containing as much as I6% of lead are not uncommon. Some vessels, presumably of the Chou Dynasty, have lead as their chief constituent. This alloy, similar to modern "bearing bronze", is sometimes more like solder than anything worthy of the name "bronze".
–– 5 Edward H. Schafer: "The Early History of Lead Pigments and Cosmetics in China", T'oung Pao, Second Series, Vol. 44, Livr. 4/5 (1956), pp. 413-438.

One quite notable difference to Western cultures is the use of lead so extensively not only in painting but also writing that this source of exposure would be quite notable among intellectuals.

Especially ceremonial bronze vessels and their very high lead content had an effect.

Human skeletal lead content has been demonstrated to be related to socioeconomic status, occupation and other social and environmental factors. However, there is minimal research into the lead content found in ancient Chinese human remains.
A series of dissolving lead experiments on ancient bronze vessels containing lead revealed that lead contamination occurred when ancient people used lead-rich alloy vessels for cooking, heating and storing food and wine. 65 ancient bone and teeth samples (from occupants of tombs and sacrificed people and dogs of different tombs) excavated from a Western Zhou Period (B.C.1046~B.C.771) burial area in Hengbei, Jiangxian of Shanxi Provinces were analysed using ICP-MS to determine their lead content.
The lead content of teeth and bones from the remains of high-status individuals differs from those of the slaves and servants within the same tombs. In addition, it is observable that differences of bone lead contents are clearly related to social ranks.
–– 4 Ying Qin & Haomiao Lia et al.: "Experimental dissolution of lead from bronze vessels and the lead content of human bones from Western Zhou dynasty tombs in Hengshui, Shanxi, China", Journal of Archaeological Science, Volume 64, December 2015, Pages 22-29

These occupational, geological and deliberate exposures stand in stark contrast to

While Roman authors as late as Pliny and Galen had ideas about dangerous and beneficial attributes of the widespread use of lead, China was decidedly different in that respect. Traditional Chinese medicine never made the clear distinction we find in texts like de materia medica of substances that are just detrimental, and distinguished from drugs, commonly called poisons or toxins. To the contrary, metals are to this day part of that system and from early on Chinese doctors believed that any substance would be useless if it didn't bring on signiifcant side-effects. A drug not making you at least quite dizzy would have to be replaced.
–– (Cf Philip Wexler: "History of Toxicology and Environmental Health – Toxicology in Antiquity, Volume II", Elsevier: Amsterdam, 2015.)

Wei Boyang's c. 142 Cantong qi, which is regarded as the oldest complete alchemical book extant in any culture, influenced developments in elixir alchemy. It listed mercury and lead as the prime ingredients for elixirs, which limited later potential experiments and resulted in numerous cases of poisoning. It is quite possible that "many of the most brilliant and creative alchemists fell victim to their own experiments by taking dangerous elixirs" (Needham et al. 1976: 74). There is a famous story about animal testing of elixirs by Wei Boyang. Wei entered the mountains to prepare the elixir of immortality, accompanied by three disciples, two of whom were skeptical. When the alchemy was completed he said, "Although the gold elixir is now accomplished we ought first to test it by feeding it to a white dog. If the dog can fly after taking it then it is edible for man; if the dog dies then it is not." The dog fell over and died, but Wei and his disciple Yu took the medicine and immediately died, after which the two cautious disciples fled. Wei and Yu later revived, rejoiced in their faith, took more of the elixir and became immortals (Needham and Ho 1970: 322).
–– Wikipedia: Chinese alchemical elixir poisoning