In Georgian England, what was a water-party?

In the early 20th century novel The Scarlet Pimpernel by Baroness Orczy, there are several references made to something called a water-party, with no elaboration other than that it's happening on a Wednesday and people are expected to bring presents.

I was curious, so I googled the term several ways, and found nothing. What does a water-party mean in the context of Georgian England, or possibly in the context of the early twentieth century if it's an anachronism? Or is it just an odd way of saying a party on or near the water?

As you suggested, a water-party is a party on water - as can be seen from this 1812 chapbook cover. 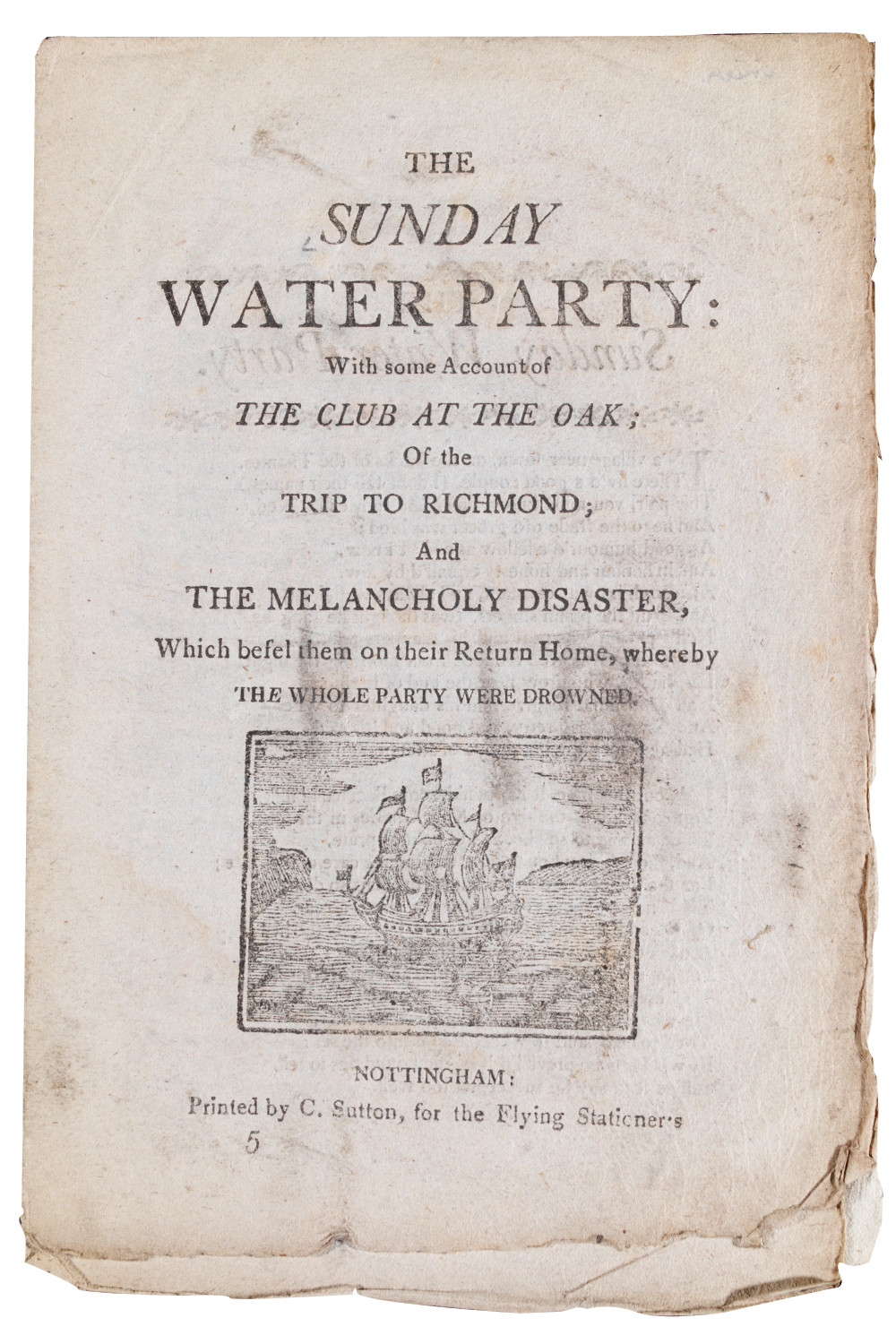 Source: Victoria and Albert Museum. Note: Chapbooks "are small cheap publications of a popular nature purchased either at booksellers in towns or from chapmen (from early English 'ceap' meaning trade) and pedlars in rural areas."

on a boat with pauses to view gardens

to accompany a vast water party organized by the court for the evening of July 17 and 18, 1717

According to the newspaper the Daily Courant, the River Thames was practically covered with boats for this event, making it quite possibly the biggest ever water-party. 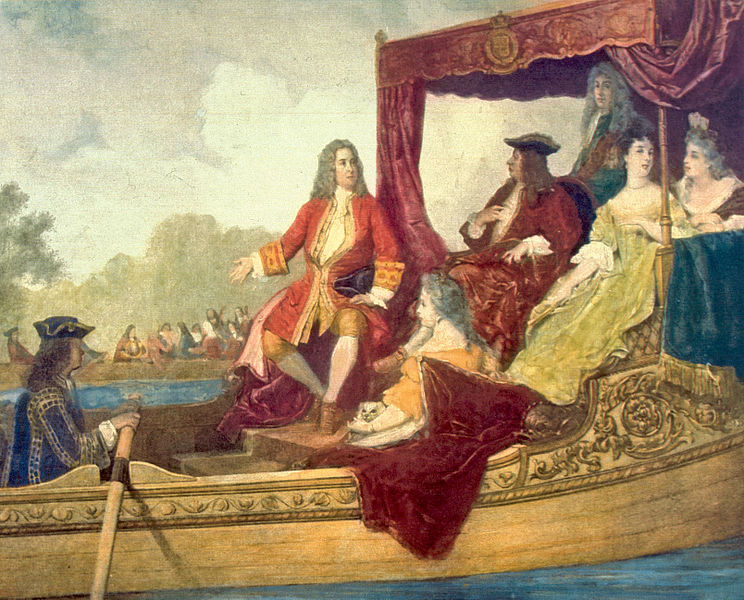 Painting of George Frideric Handel (left, with right arm extended) with King George I of Great Britain, traveling by barge on the Thames River while musicians play in the background. The painting is an artist's rendering of the first performance of Handel's Water Music in 1717. Attrib: By Edouard Jean Conrad Hamman (1819-1888) (P.M. History. Januar 2006, S. 29.) [Public domain], via Wikimedia Commons

Water-parties were one of the many possible 'activities of the ton' (pronounced 'tone'). The ton are described here as

High society; the elite; generally the wealthiest and those of rank, with royalty at the top; in today's terms, the 'in' crowd, such as Hollywood stars. To be "good ton" was paramount, and opened most any door in fashionable society.

Other social events included the card-party, balls, the garden party (breakfast outdoors), the Venetian breakfast (an afternoon party) and a rout ("a crowded party with no music or dancing or places to sit but people went because it was a place to see and be seen").

"And then, he saved her life. Did you ever hear of that?--A water party; and by some accident she was falling overboard. He caught her." "He did. I was there--one of the party."

Another reference to water parties can be found in Sports in the Western World which mentions that members of the Cumberland Fleet (a yacht club founded in 1775 and named after George III's brother, the Duke of Cumberland)

...sponsored "water parties" on the Thames

The term 'water party' is still in use today, though with a far wider range of meanings and social groups (see, for example, Urban Dictionary and babble.com).

Not the answer you're looking for? Browse other questions tagged england 18th-century or ask your own question.

4
Sect in England in the 18th century
7
What English king died from water intoxication?
4
Earning a living from teaching chess in 18-19th century England
60
Was England called England in the days of King Arthur?
9
What is a "Johnsonian world of clubs and coffee houses" in the context of 18th century England?
8
What was the price of going from England to New England as a passenger in the 1600s?
8
What was the age of majority in England in the 1870s?
0
How long would a letter take to arrive in Geneva from Ingolstadt? (Georgian era)
25
What was the criminal charge of "pretending sodomy" in 1719 England?