What was the military makeup of the Baltic tribes/Lithuania from 1200 to 1500 AD?

There is quite a lot written on the Teutonic Order and its military, but I'm having a harder time finding any good English sources on the military of one of its chief foes, Lithuania and the other Baltic tribes.

How was their military structured in this period (1200-1500 AD) and what kind of equipment and fighting styles were used? And is there any good material on this in English?

I'm going to split the time period you asked about into two (1200 to 1385 and 1385 to 1500 with the latter having more English sources available). This is, perhaps, not a very clever way of separating one from the other.

From the 12th century onwards, the local Baltic tribes were in (military) contact with the German peoples. Firstly, this can be said to have boosted the development of military tactics—especially with regards to more advanced weaponry, such as crossbows and masonry fortifications. Crossbow-making skills were taught to the Lithuanians by captured mercenaries:

A German archer was spared his life when the outworks were overrun because he agreed to teach the pagans the use of the crossbow.

The German fortifications were a new style for the Baltics because they used mortar to fix the stone in place. Stone itself had been used in the past by the local tribes. The Crusaders also brought with them a newer concept of sieges and engineering skills though this—at least catapults and ladders were taken over by the locals and probably before the crossbow:

...crossbows were vital defensive weapons [for the German Order] and in 1265 there is an account of how the sharpshooting of one crossbowman stopped the Lithuanians using stone-throwing machines against one of the Order's minor outposts at Wehlau, which lay on the Pregel River upstream from Konigsberg. He first killed the Lithuanian leader with a bolt and then put the catapult out of action by shooting at the man who was in charge of it and nailing his hand to the machine.

The motivation for the Lithuanians to develop strong siegecraft skills lay in the Germans building large number of castles on their borders. This can be followed in the borders of modern Latvia where most are extant, but also in Prussia (where less survive). The below map is from my own extensive research and should indicate the majority of the German Order's castles. The Lithuanian territories are clearly demarkated (by the absence of castles/placemarks) though in a slightly larger extent in those days: 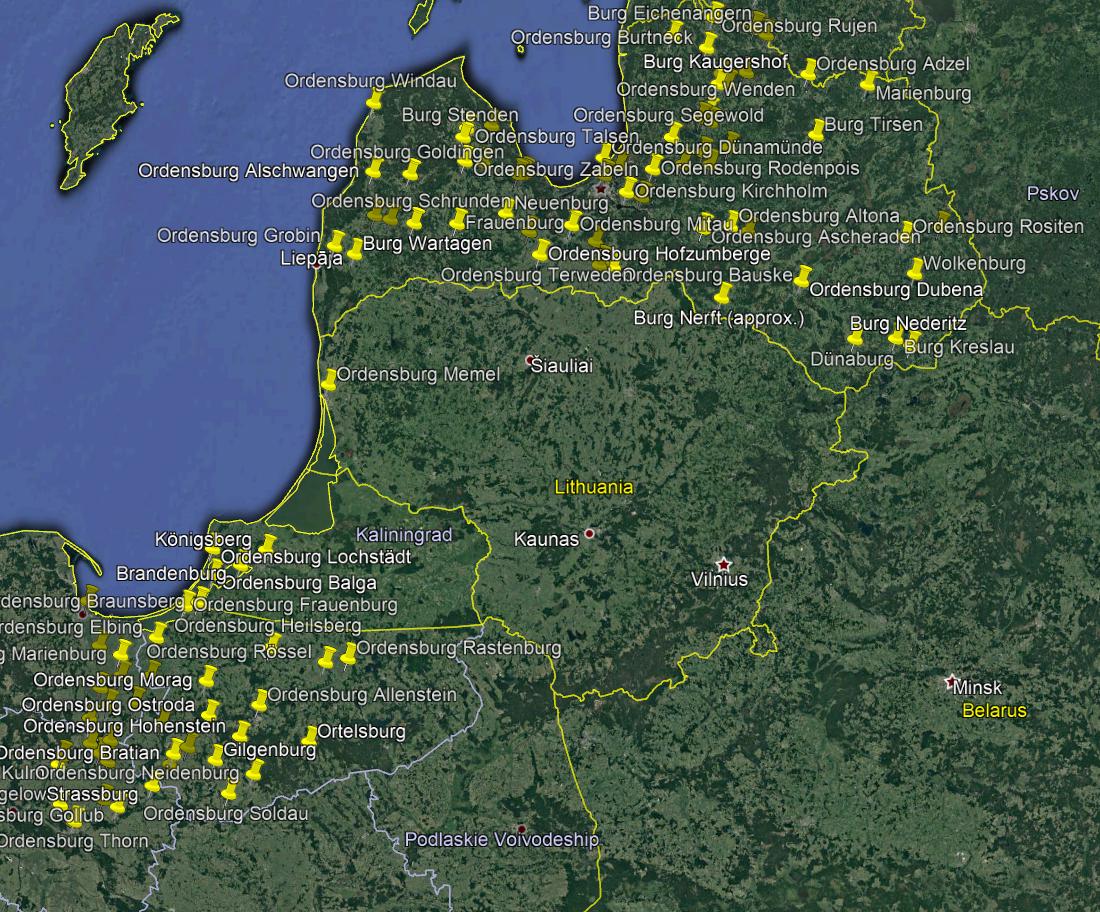 With regards to the fighting style, raids and counter-raids were the most common. This was partly due to the lie of the land with extensive primary forests, boglands, and other areas that were difficult to trespass. The objective of the raids was to appropriate the opponents' cattle and, if possible, take prisoners as slaves.

The nature of the territory also made winter campaigning a prime objective of the forces here. As the rivers froze, both the German heavy cavalry as well as their siege engines (and the Lithuanians' lighter cavalry) was able to use these as highways. The same applied on the sea, with an example in the Battle of Karuse (not to be confused with the 1242 Battle of Lake Peipus) where a Lithuanian raiding party made it well into Terra Mariana and also crushed the German force. Specific defensive formations, including the use of sleighs, is described:

A powerful army under the new Grand Duke Traidenis of Lithuania raided Latvia and reached the coast of the Bay of Riga. They then decided to continue raiding as far as Oesel by marching across the frozen sea. The Livonian Master hurried to intercept them. His plans were to give battle on the ice. The survivors would be dispersed, and would probably perish on the way home across Livonia from cold or massacre. But the Lithuanians proved a match for the Teutonic Knights. They dismounted from their sleds and arrange them as a barricade for the moment when the heavy cavalry of the Knights charged at them. ... The frozen surface of the sea sustained a fierce conflict, but at the end of the brief hours of daylight the Lithuanians were victorious. Master Otto and many of his knights lay dead.

Conquest of lands does not seem to have been a primary motive. Ambushes were also common due to the dense woodlands. A good example of these is Saule in 1236 where the Sword Brethern were annihilated while crossing a river. Apparently, though, the main culprits in the German defeat were visiting crusader knights who did not heed the Order brothers' caution and attacked after which the Knights' had to also commit themselves. This defeat was sufficient to wipe out nearly all of the fighting strength of the Sword Brethern, leading to their subsuming in the German Order.

After the Lithuanian-Polish union of kings in the late 14th century, the Lithuanian army would have started to take on Polish elements (and vice versa). The 1410 Grünwald/Tannenberg campaign is therefore a good example. The Lithuanian armies would have mostly consisted of light cavalry armed with spears while Poland supplied some heavy cavalry (armed much like the Germans) and heavier infantry:

One major deficiency of the Polish army, a lack of light cavalry, was remedied during the Tannenberg campaign by the Lithuanian army. As Posilge puts it, King Jagiello 'gathered the Tartars, Russians, Lithuanians and Samogitians against Christendom'. ... he divided his army into Banners, ordering each unit to guard its flag and obey their leader. He also gave orders that in battle the poorer armed and mounted men were to be positioned in the centre of each Banner. ...

Whereas the armour and equipment of the Polish knights was similar in appearance to their western 'crusader' counterparts, that of the Lithuanian knights was markedly different showing clear eastern influences. The absence of heraldic surcoats amongst the Lithuanians reveals the predominance of mail and lamellar armour. Probably the most characteristic feature was the distinctive rounded and conical helmets. These were usually supplemented with a mail aventail and mail was also used to protect the legs although leather boots are also noted.

There is a lot more information available on this latter period, and most books the cover the German Order's conflict with Lithuania-Poland should provide extra information (though it is not my speciality).

Primary sources would include Henry of Livonia's Chronicle and the Livonian Rhymed Chronicles. I am unsure whether the 1977 English translation of the latter is accessible. A translation to both Latvian and Estonian definitely exists.

Secondary sources are rather difficult to find for this time and period. Osprey is one of them, but the focus is generally on the German Order as mentioned in the OP. I have relied primarily on Stephen Turnbull's books (mainly, 'Crusader Castles of the Teutonic Knights, 1' and '2'). Further sources regarding the Lithuanian/Polish offensives against the German Order should be relatively easy to find.

In the more full-blown narrative histories, Eric Christiansen is another option but I've not read his works yet personally. In Sweden, Jonathan Lindström's 'Biskopen och korståget 1206' covers the Swedish incursions into Terra Mariana. Extensive literature might exist in Latvian & Lithuanian but I don't have access to those sources.

Not the answer you're looking for? Browse other questions tagged military middle-ages europe crusades lithuania or ask your own question.

4
What was the fighting style and equipment of 13th century Eastern European Baltic and Slavic cavalry?

7
Were women banned from entering the castle of Trakai?
4
What was the fighting style and equipment of 13th century Eastern European Baltic and Slavic cavalry?
8
What was Pope Innocent III's response to the Children's crusade led by Stephan of Cloyes?
2
Was the Vistula delta inhabited by Slavic tribes or Baltic tribes?
21
Did horse sacrifice persist in Christian Europe?
4
Military reforms after the battle of Manzikert?
26
How did William the Conqueror consolidate his military victory?
11
What are the precursors of the Bayeux Tapestry?