What uniform is in this picture? 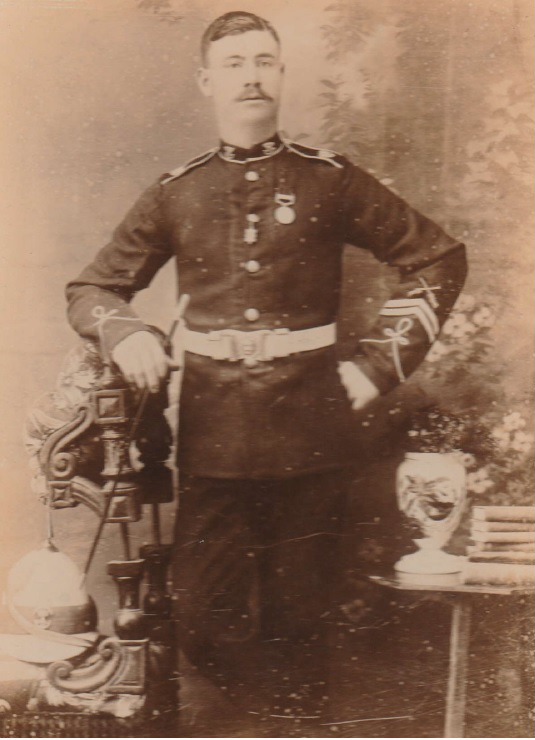 Believe he was in the Somerset Light Infantry based at Jellallabad camp Taunton sometime between 1890 and 1914. Any help from anyone appreciated. We cannot find his birth or death as he used different names so we are trying to pinpoint his army record. Thank you for any help

This is a Private of the 13th Regiment of Foot (1st Somersetshire) after 1881. He is a qualified marksman with two Good Conduct stripes and has been in the service for at least six years.

The trefoils on his sleeves are, I believe, purely decorative.

The medals are too blurry to make out.

Introduced in 1836, they were originally worn on the lower right sleeve and were worn by Privates, Lance-Corporals and Corporals. On 1 March 1881 a General Order moved them to the lower left sleeve.

As for his rank... he's not a commissioned officer. Good Conduct stripes were only given to Privates and Corporals. He has no rank chevrons so he's not a Corporal. He's a Private.

The photo shows him in India. The 2nd Battalion was there from 1881 until 1894. The 1st Battalion from 1893 until 1908. He’s wearing an ‘India Pattern’ 5-button frock, which was used in lieu of the full dress tunic towards the end of the 1890s. The 1st Battalion wore a red pagri (folded wrapping) around their helmet, which is what you see here.

Not the answer you're looking for? Browse other questions tagged military united-kingdom identification uniform or ask your own question.

5
What kind of uniform is this?
6
What uniform is this?
1
What uniform does PewDiePie wear in this picture?
7
Can anyone confirm the identity of these WWI uniforms?
16
Did anyone face consequences (charges / court-martial) for the 1914 Christmas truce in WWI?
4
Can anyone help identify this French military uniform?
15
Based on his service record, where was this soldier deployed in WW2?
0
What time period is this uniform?