What is the first horse name recorded in history?

What is the first horse whose name has been recorded in history?

I wrote down a long list of famous people and their mounts, and I realized that Bucephalus, the horse of Alexander the Great, was the first case I had.

Some resources online say that Xerxes' mount was called Strymon, but I haven't been able to confirm it in the Perseus site and I think someone may got confused when reading about Xerxes crossing the Strymon river.

Anyways, what is the first famous horse in history that we know its name?

The Kassites (Babylonia, c. 1531 BC and until c. 1155 BC) named horses and were well-established in horse-breeding. Some of these names have been dated to the reigns of Burna-Buriash II (c.1359–1333 BC) and Kurigalzu II (c.1332–1308 BC). These names are among the few words we have of the Kassite language, and are given in An Early History of Horsemanship

Draught animals are indicated by their coats, sires by names. Mares are not mentioned. Some lines may be mentioned as examples: "Z.2 One pair, one bay and one black, sons of Samlu, son of Armi. Z.3 One (pair), one chestnut son of Pikandi, and one black son of Halsi. Z.3 One (pair) chestnuts, sons of Nuhhuru".

On the meaning of horse names among the Kassites and the Egyptians,

The names of the sires seem to be descriptive and to be derived from some peculiarity of their coats. So for instance "Hubbash" is the felt-haired, "Nuhhuru" is the damp, "Abuttanu is the curly-haired.

Horse breeding was big business even at this early time in history:

The Alalakh tablets from Alalakh in Syria provide the earliest extant record of organized, state-run horse breeding in the ancient world, dating to the mid second millennium BCE. Documents from the Mitanni, Kassites and Egyptians can be interpreted as a basic type of studbook or breeding records listing chariot horses by the colour of the coat and the name of their sire. The Nuzi tablets include records of highly organized, state-run breeding farms and training facilities for the production of chariot horses.

Source: Carolyn Willekes, 'The Horse in the Ancient World' (2016)

As a side note, there is also a reference in Looking for the Aryans to the Kassites "who appear to have a horse-based tribal name".

Although not the oldest named horse, Kanthaka is worth mentioning as there is some information on him (though how reliable is debatable). Kanthaka, the favourite horse of Prince Siddhartha, later and better known as Gautama Buddha. Prince Siddhartha is believed to have been born no later than 480 BC (died 400 BC), but maybe as early as 563 BC (died 483 BC).

According to the article Kanthaka, Horse of Buddha,

Kanthaka was 18 cubits in length and accompanied prince Siddhartha in all the major events. Donning a pristine white color it truly complemented the royal stature of the prince. It was the most able horse in the court of King Suddhodana. 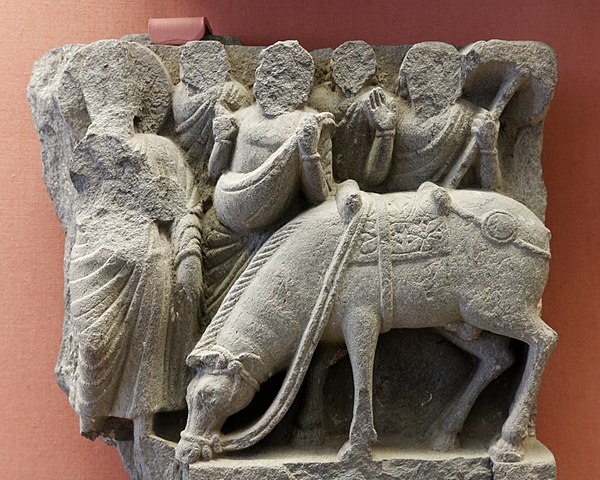 Leaving behind his wife, his baby son, and a life of luxury, Siddartha escaped the palace riding on Kanthaka. When he got off his horse for the last time to continue his life’s journey on foot, Kanthaka then died of a broken heart.

It may not be the earliest, but the New Kingdom (19th Dynasty) Pharaoh Seti I of Ancient Egypt (died c. 1279 BCE) certainly had the names of several of his horses inscribed on monuments to his victories.

For example, in his paper The Victories of Seti I Recorded in the Great Temple at Karnak, E.L Lushington observes:

... sometimes the horses' names are engraved above or below them, as likewise the names of towns, fortresses, or waters by which the royal army pursues its march. ... and again, above the horses "The great foremost charger of His Majesty, Victory in Thebes, Nextu-m-Uas", a name also borne by one of the two horses of Ramses II, whom. in Pentaur's recital he praises as having alone proved faithful allies to him when deserted by his troops and captains.

The reference to the horse of Ramses II is, of course, in the Egyptian record of the Battle of Kadesh which is usually dated to 1274 BCE.