What's the festival shown in this illustration?

This poster shows a hopping European party of a few centuries back. Unfortunately there's no attribution or date on this old print. The text resembles German and refers to the second chapter of the gospel of John, which is when Jesus changed water into wine, and drove the moneychangers out of the temple. This looks more like the former, but if Jesus is in the image, I don't recognize him.

Where did this party happen and what was it celebrating?

It's the Wedding at Cana.

The text is in Swedish, written with Gothic script (this was common up to the end of the nineteenth century in Sweden). The text is

... food that becomes well tasting. About the wedding in Cana in Galilee. Chapter 2 of John.

The original painting was probably done by Johannes Nilsson, from Halland (this would explain the odd spelling "madd", as that is a souther Swedish dialectal pronounciation), in 1812, or at least someone copying him. Here is a version of the same motif he did in 1797, from Hallands Konstmuseum: 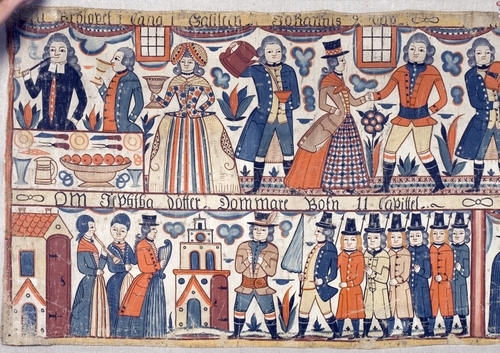 You can clearly see that it's mostly the same composition, though reversed, and with fewer figures and less ornaments. He also used this spelling "madd" at least once, but the rest of the text does not match.

I own it now! Purchased from previous owner in Sandviken outside the town of Gävle. He told me the story of its visit to Spain. This exact painting was featured at an exhibition in Barcelona. It’s a copy of an original. However a good one made probably turn of century 1800-1900.

Not the answer you're looking for? Browse other questions tagged identification art festival or ask your own question.

3
What does this symbol in the title page illustration of the "Margarita Philosophica" mean?
2
Who is this person?
1
Who's the artist behind this popular painting?
2
What's this antique coin?
8
Who was the real beginner of Lord Ganesha festival?
13
What is this war machine shown on Trajan's column?
2
What's the history of this mortar shell?
23
What is the spiral-looking device shown in this wall painting?