When and where were the first coins made showing the currency or a face value?

According to this article Origin and Evolution of Money, coins

...for many centuries...were guaranteed by their intrinsic value, that is to say, by the trade value of the metal used in their production.

This made putting the unit of currency on coins unnecessary, though that is not to say that none of these had a face value indicated. However, if this page on Roman coins is anything to go by, it seems the Romans never indicated a currency or face value on their coins, and it seems that British coins from, for example, the reign of Henry VIII also did not.

Despite extensive googling (including several Wikipedia pages and also this timeline), I've been unable to find out when coins first showed currency or face value. The above cited article (Origin and Evolution of Money) mentions 'the end of the last century' (by which I take it to mean the end of the 19th century), but there is a Louis XVI coin from 1791 which shows a face value of 30 sols. This British coin from 1798 (George III - farthing) also suggests otherwise:

Of course, there is the possibility that, for centuries, most coins did not have a face value while the occasional one did. For example, unlike the 1798 coin above, this more recent Queen Victoria 1839 coin has no face value.

What is the oldest known coin in the world which shows a face value or currency?

Edit 2: If symbols and punches count as a means of communicating a coin's denomination, then this article by Koray Konuk, which was published in the Oxford Handbook of Greek and Roman coinage, would suggest that Lydian coins (i.e. the very first coins to ever use gold and silver according to Herodotus), which were minted circa 700 BCE to 550 BCE, had a methodology to denote what they were worth:

Although irregular in size and shape, these early electrum coins were minted according to a strict weight-standard. The denominations ranged from the unit called stater (14.15g in the Lydo-Milesian weight system) down through half-staters, thirds, sixths, twelfths, 1/24ths, 1/48ths, 1/96ths to 1/192nds of a stater (about 0.08g, fig. 11; this denomination has been recently identified: Stingl 2001: 42; Konuk 2003: 33). The rich iconography of the obverse of the early electrum coins contrasts with the dull appearance of their reverse which usually carries only punch marks. The shape and number of these punches varied according to their denomination and weight-standard. Although there are some exceptions, the following system was in place: in the Lydo-Milesian standard, by far the most widely used, staters (14.15g) carried an oblong punch mark between two square ones (fig. 2, 4 and 8), half-staters had two oblong punch marks, third and sixth two square punch marks (fig. 7), smaller fractions had only a square one. In the Samian (Euboeic) weight system, the stater (17.4g) had two oblong punch marks, the half-stater, a rectangular and a square (sometimes triangular) punch marks (fig. 12), smaller denominations only a square one. In the Phocaic weight system, the stater (16.8g) had two square punch mark, one bigger than the other (fig. 4 and 5), although there are a few examples with only one punch mark which was the rule for smaller Phocaic fractions. 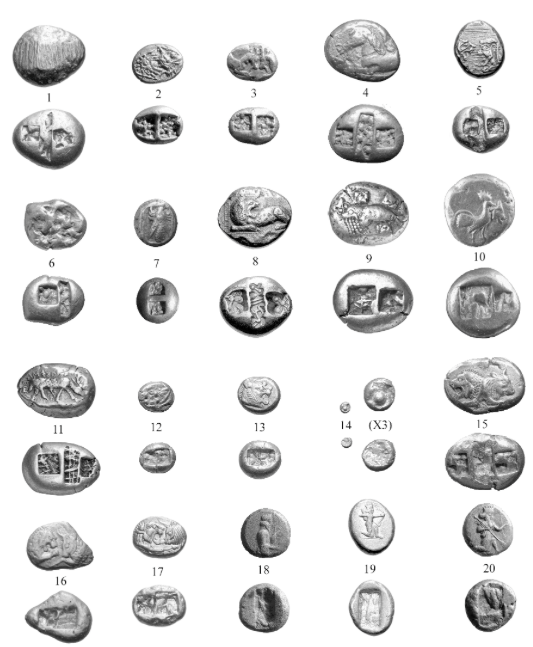 Edit 1: I googled a bit more, recollecting that the Roman Denarius had a long history of debasement and might have made use of fiat-like features at one point. The latter page incidentally contains this passage of potential interest (emphasis mine):

In 274, the emperor Aurelian reformed the currency and his denominations remained in use until the great recoinage of Diocletian in 293. Aurelian struck a radiate aurelianianus of improved weight (84 to the Roman pound) and fineness (5% fine) that was tariffed at five notational denarii communes ("common denarii" or d.c.). The denomination carried on the reverse the numerals XXI (or in Greek KA) to denote the coin as equal to 20 sestertii (or 5 d.c.).

You can find a few examples of such coins on this page.

Not sure it'll lead to the very oldest such coins, but intuitively coin face value would very likely be contemporary with the introduction of fiat money - because in earlier times the weight and metal composition of the coin would be good enough to capture its value. It's only when you start issuing money on paper and cheap metal that the face value starts to matter.

In this spirit, Revolutionary France introduced coins at the side of Assignats where the denomination is clearly marked in plain text: 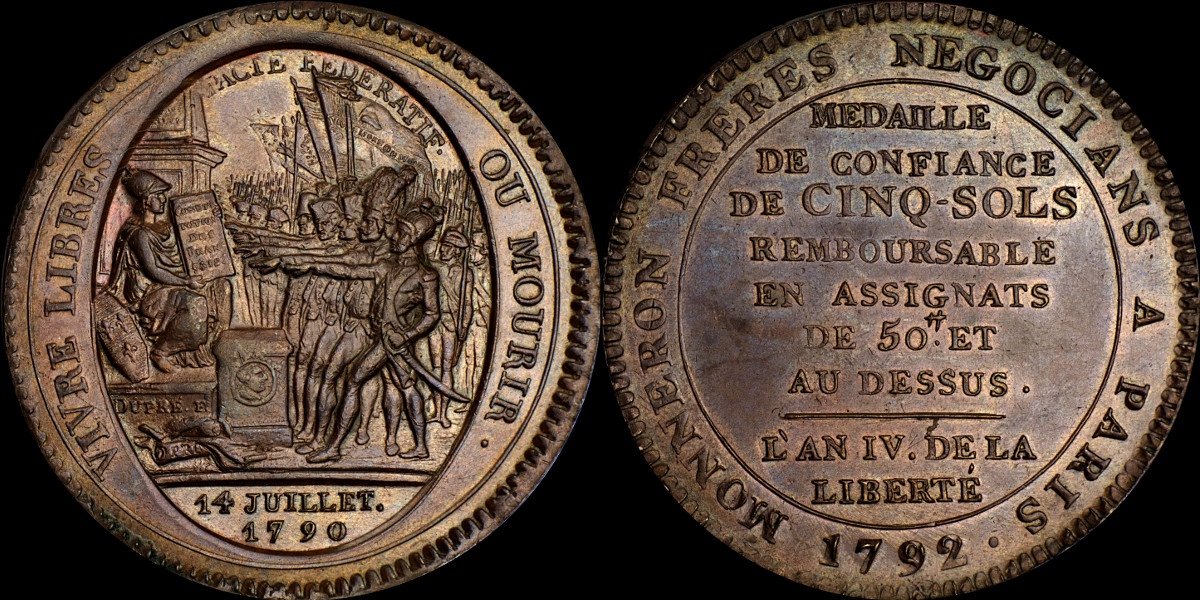 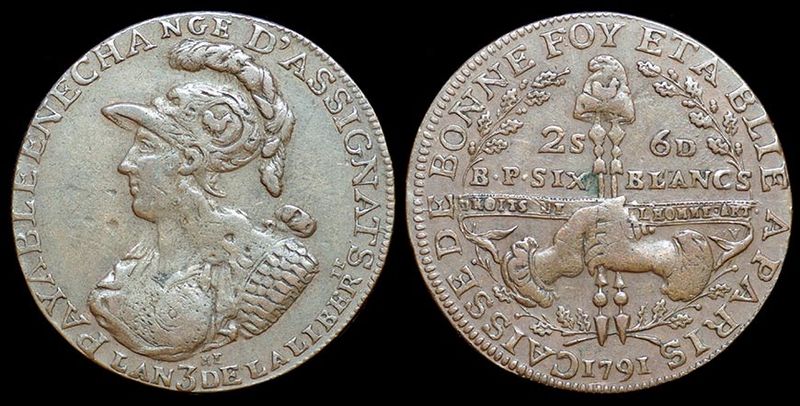 Across the Atlantic, the Thirteen colonies used Colonial Scrip before Independence. They didn't mint much, and relied a lot on foreign coins (Spanish dollars in particular) insofar as I'm aware. But not minting much doesn't mean they didn't mint at all.

Massachusetts seems to be the earliest of the Thirteen Colonies to have issued currency, and in fact it minted coins 4 decades before it introduced fiat money. It did so in denominations of of 3 and 6 pence and 1 shilling. Below are 3 pence and 1 shilling New England coins (the 1652 date on the coin reflects when they were first authorized, rather than when these specific coins were actually minted), followed by two more recent ones from before the US dollar was introduced. 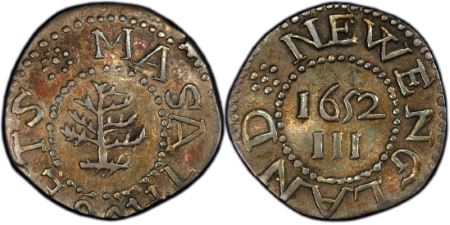 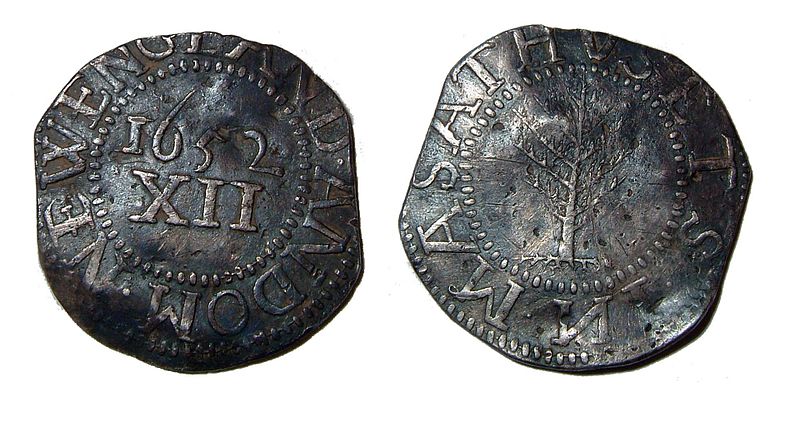 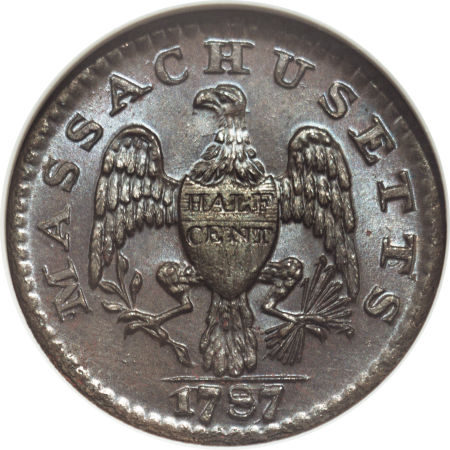 To the East, China experimented with using fiat money long before Europeans did, and the coins they used day in day out were made of copper. I'd gather the very earliest example of denominated coins would be from China, but I unfortunately can't read what's on Chinese coins and thus can't say for sure.

A candidate I'm aware of is the Shekel minted during the first Jewish revolt circa 66 CE https://en.wikipedia.org/wiki/First_Jewish_Revolt_coinage

Not the answer you're looking for? Browse other questions tagged money currency numismatics or ask your own question.

9
When and why did round coins become a practical standard?

20
What were the first local currency systems in history?
6
When were Roman Emperor's faces placed on coins?
12
Purpose of Guinea in British monetary history
11
What is the origin of currency signs being placed before the numerical value?
2
Were metal purities in coins well known and standardized by the 1500s?
11
What happened to the coins in ancient Greece and Rome when monarchs changed?
6
How did currency exchange work in the Middle Ages, especially if the coins are not recognized?
9
When and why did round coins become a practical standard?
7
When did Dei gratia/fidi defensor first appear on British coins?