When was natural gas first used for cooking food?

Natural gas seeping from the ground was exploited or regarded in different ways by ancient civilizations, but it is generally accepted that it was the Chinese who first exploited gas for heating:

Finding places where gas was seeping to the surface, the Chinese formed crude pipelines out of bamboo shoots to transport the gas, where it was used to boil sea water, separating the salt and making it palatable.

Then there is this in the Wikipedia gas lighting article:

Chinese records dating back 1,700 years note the use of natural gas in the home for light and heat via bamboo pipes to the dwellings.

However, there is no explicit mention of the use gas for cooking food even though it seems to be a distinct possibility. Meanwhile, this UGI EnergyLink article says that,

Natural gas was first used for cooking in Persia starting in the first century AD. Since pipes didnâ€™t exist yet, the king of Persia built his royal kitchen next to a natural gas fissure to use as his own personal stove.

However, this Smithsonian article cites a much later date:

According to the Gas Museum, in Leicester, England, the first recorded use of gas for cooking was by a Moravian named Zachaus Winzler in 1802.

When, and by whom, was gas (natural or coal) first used for cooking? What evidence is there for the various 'claims' above?

A Brief History of Natural Gas 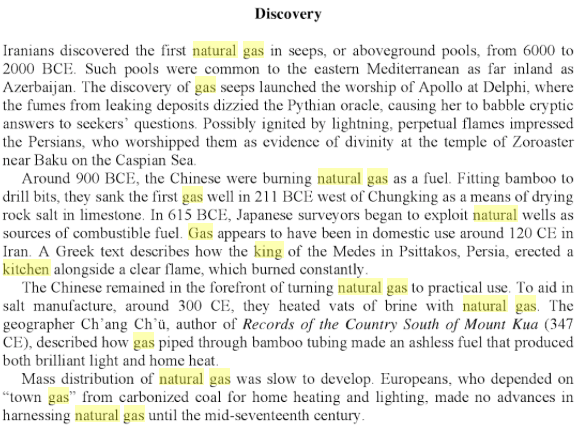 I unfortunately can't locate the bibliography section to back the claim, but a Greek text describing how the king of the Medes in Psittakos, Persia, erected a kitchen alongside a clear flame strikes me as a lot more precise than the vague claims seen on various oil/gas trivia sites. (The 120 CE date is weird though since that would be the Parthian Empire rather than the Medes.)

This article by Kaveh Farrokh is much more specific, and offers circa 550 BCE as the actual date:

The art of cooking is a long-standing tradition on the Iranian plateau. Ancient Persia is believed to be the first known region to develop piping technology for streaming natural gas to kitchens in the 550s BCE or perhaps earlier. The ancient Greeks certainly knew of Persian cuisine, at least as outlined by Xenophon in his Cyropaedia. Aristotle (384-322 BCE) for example refers to Persian cuisine as thus: â€śIn Media and the district of Psittakos in Persia there are fires burning, a small one in Media, but a big one in Psittakos, with a clear flame. So the Persian king built his kitchen nearby. Both are on level ground, not in high places. They can be seen night and day.â€ť

The quote appears to be from the de Mirabilibus Auscultationibus (paragraph 35), which is usually attributed to Aristotle. The claim Persia developed pipeline technology first strikes me as weird if not dubious, since the Chinese arguably did it before them. Plus, there would be no need for pipelines if you'd build a kitchen atop an ignited gas seep. So that bit might be the author getting ahead of themselves. But the Ancient Greek citation seems genuine.

On the next page of her book, Snodgrass puts forward that the first use of gas to cook in a way we'd recognize today to have occurred in England in 1802 indeed - but mentions Frederik Albert Windsor of Braunschweig rather than Zachaus Winzler.

The claim that Chinese used natural gas to cook brine in order to extract salt since ancient times seems rather documented. I admittedly stuck to cursory googling but I haven't located any sources that claimed or hinted that they used it for cooking. One site (can't recall which) justified they didn't (without citation) because it would have required modern pipelines. Which I took as meaning safety reasons got in the way. (But I might have read that on a gas distributor's website, so take it with a fistful of salt.)

At any rate, going by the above, it indeed seems plausible that gas for cooking first occurred in Persia in a "brute" form (i.e. gas seeps), and in England in a modern form (i.e. gas pipelines). Who was involved in the latter isn't clear to me, but FWIW I'm tempted to trust the Smithsonian's Winzler claim over the Braunschweig claim mentioned above.

Not the answer you're looking for? Browse other questions tagged food records natural-resources or ask your own question.

7
What containers were used for food prior to the industrial era?
14
When was tofu invented? Was it specifically for vegetarian consumption from the beginning?
13
When was the tactic of chaining ships together last used in a major naval battle?
1
Why was whale oil used instead of petroleum?
71
Is it true that "All spicy food is from Latin America"?
16
How exactly were beer/bread made in Ancient Egypt?
5
Where/when does the wok start to differentiate itself from pot-style cooking vessels?