During WW2, what were working conditions of factory workers in Russia?

During WW2, what were working conditions of factory workers in Russia? By working conditions, I mean things like how many hours per week they worked, how many days off they got per month, if they lived in the factory itself, and how much they were paid or else how much stuff was rationed to them. I'm interested in the years 1941 - 1945.

Many men were mobilized into the army, the only people who had an exemption ("бронь" - literally, "armor") were extra-skilled workers and administrators, and the threat of withdrawing the exemption was a powerful pressure point for them (and, of course, on the other end of the spectrum, there were people who tried to volunteer for the frontline and were refused because they were necessary for maintaining the industrial output).

Women and adolescents were mobilized into the industry to replace the men, but note that, unlike in the West, many women were already in the industry since the 1930 due to the program of industrialization, so the main "new recruits" were teenage "фабзайцы" (mobilized trade school students - running away punishable by 1 year of labor camp). These "workers" were trained and driven by the aforementioned extra-skilled workers to the degree that the workplace injuries and even deaths were relatively common. 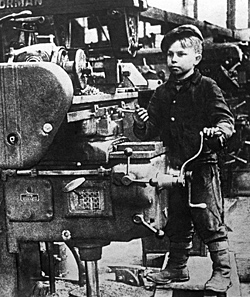 The official working hours for children was at most 6 hours per day, for adults - 10-12.

Vacations (12 days per year) and days off (1 day per week), while mandated by law, existed only as irregular and exceptional extra prize.

Food was rationed, upwards from 125g of bread per day for non-workers and 250g for workers in the blockaded Leningrad. People grew potatoes in their CFT, and sold family heirlooms (if they had any) for food in neighboring villages.

The "norms" (how much food one was entitled to) depended on the personal productivity. E.g.:

other rationed products included salt, pepper, potatoes, tea, sugar, "fats", "meat and meat products", "fish and fish products" etc. If a product was not rationed, it meant that it was only available "commercially" (i.e., at the exorbitant market prices).

Not all rationed products were always available at the distribution points though, and one could not get a double portion the next day to compensate for the missed food.

I can share my family experience. They were moved from Ukraine, first to Staingrad, and then, when the Germans approached Stalingrad, further East to Siberia (with the Kharkiv tractor plant which produced tanks).

They lived in "baracs" which were huge wooden sheds, without running water, or any facilities (cooking was on portable kerosene stoves), one family separated from another by a curtain. Work day was 12 hours and they were working in a plant without walls (the equipment was moved from Ukraine, but they started working without factory buildings, the equipment was placed in the open air).

My uncle who was 12 years old at that time died in an accident while working as a "rail-cart pusher" (rail carts were pushed by children). His sister (my mother) who was 15, was also working, but in the evenings she studied at school (after the war she was able to enroll to a medical institute and become a doctor). Their mother was working as a cook in the factory cantina, and their father was missing in action in 1941 (later it was found that he was killed in action. They did not know about his fate until the 1970s).

17
How frequently were homing pigeons used in the World Wars?
19
How much materiel was shipped to Continental Europe per month, after D-Day?
5
Did West Russia really have a rock shortage in WW2? And if so, what was the cause?
16
How many people worked to build one Liberty ship?
52
Was Switzerland really impossible to invade during WW2?
23
Who was the most successful German spy against Great Britain in WWII, from the contemporary German perspective?
9
What WWII fighter raid did my great-uncle misremember?
1
Why were some German and Japanese cities bombed more than others during WW2? Is there a scientific consensus?
4
What were the cost of comparable aircraft?