How did people react to these WWI posters with their 'brutal messages'?

the British government, through the Parliamentary Recruiting Committee, set about producing posters to swell the ranks of Britain's small professional army with volunteers.

Initially, these posters focused mostly on providing information on how to enlist and on stirring up patriotism. In 1915, though, a number of posters seemingly aimed at shaming (directly or indirectly) men into enlisting appeared.

The best known of these posters is probably Daddy, what did you do in the Great War? (click here for image), but perhaps equally hard-hitting is the one below addressed To the young women of London 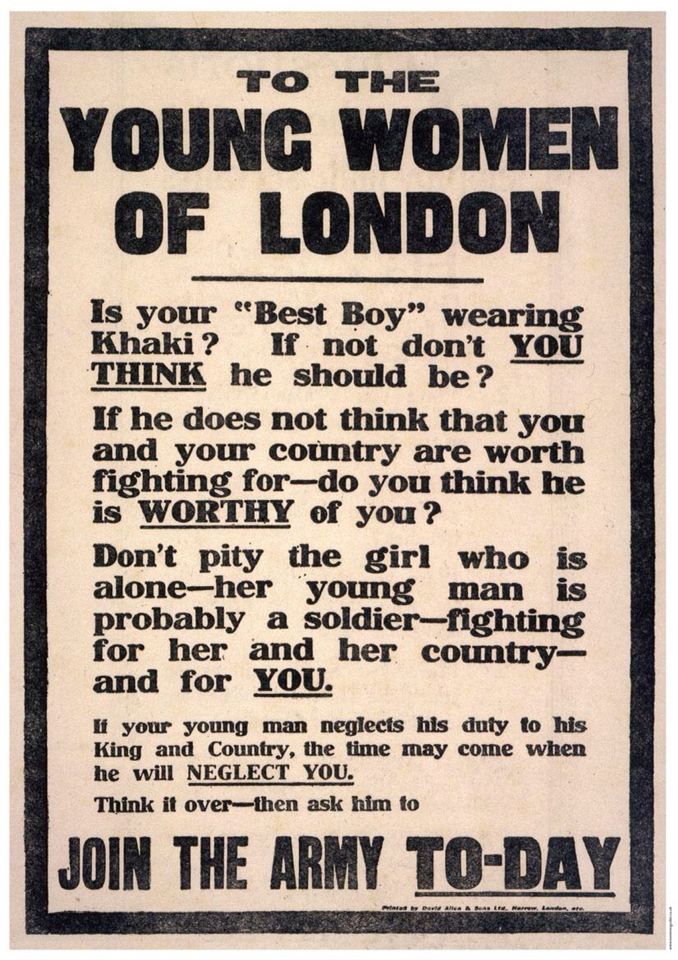 Stéphane Audoin-Rouzeau and Annette Becker have written that the campaign of mass propaganda, including what they describe as the "guilt-inducing and brutal messages" such as "Daddy, what did YOU do in the Great War?" were not the only contributing factor to these recruitment figures, writing that recruiters "quickly decided that using the latest forms of mass advertising had a negative effect".

The above passage isn't very clear about whether or not these posters helped or hindered recruitment and, as SJuan and Pieter Geerkens have pointed out in their comments, the stats appear to have been misused.

While it is true that later posters switched emphasis, the obvious reason for this was that conscription was introduced in 1916 so this kind of 'persuasion' was no longer necessary.

Did these kinds of posters, on balance, have a negative effect?

Are there any primary sources from the Parliamentary Recruiting Committee citing evidence of this 'negative effect'?

Were there any newspaper editorials (for example) or prominent people who voiced opposition to such posters as the ones cited here?

It's hard to separate the effects of the posters from the larger effects of mass propaganda, and of using shame as a strategy in general, most notably the notorious White Feather campaign.

But the latter's effect is usually seen as effective in the short term, boosting enlistment numbers. Views of the campaign subsequently turned negative, and it wasn't so prevalent during WWII. I suspect that's what the "negative effect" is referring to.

The campaign is where young women were encouraged to hand out white feathers - symbols of cowardice - to healthy unenlisted men, in order to shame them into enlisting. Due to gender roles and the view of masculinity at the time, this was effective and helped increase enlistment, but the community quickly took a dim view of the campaign and the women who participated in it, especially when the recipients of the feathers were undeserving, such as discharged servicemen or those on leave, and adolescents.

For more info, see The White Feather Campaign: A Struggle with Masculinity During World War I

11
Why did the Germans wait until it was too late to reinstate their unrestricted submarine warfare in WWI?
3
How did soldiers in WWI who wore jackboots keep the boots from being sucked off in the mud?
24
How did ships acquire targets beyond the horizon in WWI?
3
How did Hindenburg and Ludendorff lose WWI?
10
How did the British Army unit size and structure in WWI change from 1915 to 1918?
6
In which East European country in the 1980s did people put their TVs in front of windows and turn them facing outside?
8
How long did Adolf Hitler serve on the front lines as an infantryman in WWI before becoming a courier?