During the French Revolution, how did the French address non-citizens?

I've read in multiple books and articles that during the French Revolution the address of monsieur / madame (my lord / my lady) was suspended in favor of the more égalité-friendly citoyen / citoyenne (citizen). The change of address is usually mentioned and then quickly passed by.

But, assuming my understanding is correct, the above raises an obvious issue to me: how was a good Republican supposed to address someone who was not a French citizen? There were many foreigners in France during the time of the revolution, and presumably not all of them were granted honorary citizenship. And of course the French Republic continued to deal with foreign nations, albeit often on unfriendly terms.

How was a citizen of the revolutionary government supposed to address those who fell outside the bounds of the citizenry?

French historian Sophie Wahnich, on the subject of 'L’étranger et la révolution française' (Foreigners and the French Revolution), says that:

Translation: It must be understood that the notion of nationality did not exist at the heart of the French Revolution. Neither the word 'nationality' nor the word 'citizenship' were used at the time. Men and women used a series of expressions such as "the right of the citizen", sometimes "the rights of French citizen", the "quality" or the "title" of French ", the "title of citizen", etc. But this word "citizen" effectively effaced the distinctions between legal affiliation to the nation, patriotic engagement and the exercise of political rights, and that, as early as 1789, even before there was a real constitution... We understand that the only constraint to this definition of political identity is a constraint of place and opinion, of adhesion, not a constraint of blood or even legal nationality, not a constraint of long acculturation either, because this membership can be immediate whatever his personal history,

Although this is not conclusive, it would appear that everyone was, theoretically at least, referred to as 'citizen' (citoyen, citoyenne), regardless of nationality. How much consistency there was in this, even when referring to people who could not be considered foreign, is debatable. Jean-Paul Marat, described as "one of the most radical voices of the French Revolution" published a letter in his publication l’Ami du Peuple (10 December 1790) which uses 'monsieur'. Marat himself used 'M. Necker' (M. = monsieur - Jacques Necker was a Swiss German banker) when denouncing the deposed Louis XVI's finance minister. On the other hand, Louis XVI was referred to as 'Citoyen Louis Capet'. 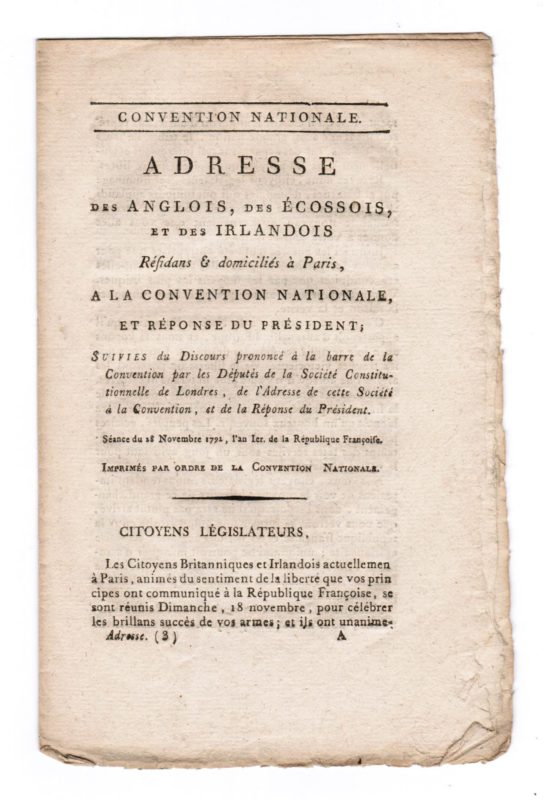 Source: Simon Beattie "Printed in 1792, this is one of the first publications from the newly inaugurated Convention Nationale, the third government of the French Revolution, and in which English, Scottish and Irish citizens, resident in France, voice their support for the revolutionary government." Note the use by these 'foreigners' of 'citoyens legislateurs' and 'citoyens Britanniques et Irlandois

Foreigners could, and did, participate in affairs at both the local and the national level. Initially, at least, they had almost the same rights and duties as the native French. Those who did not accept the new regime were not deemed worthy of the title 'citizen', though this did not suddenly happen, and nor was there necessarily agreement on who was or was not 'worthy'. Other foreigners sought refuge in revolutionary France to escape persecution for their radical beliefs in their own countries; they were deemed worthy of the title 'citizen'.

In diplomacy, the usual title of 'excellence' was to be replaced by 'citizen' though this (not surprisingly) was "not well received at the formal Spanish court" according to Linda Frey & Marsha Frey in The Culture of French Revolutionary Diplomacy. Some diplomats followed the guidelines with more zeal than others: one was described as "more of a scoundrel than the Goths and the Huns" by the Neapolitan envoy, while another had reportedly

used expressions “unworthy of a French Republican,” such as “excellence” and “serenity,” while minister at Zweibrücken.

At the same time, documents from the Comite diplomatique (also here) use both 'citoyen' and 'monsieur', the latter supposedly being strictly forbidden. As the term 'minister of the republic' was an acceptable term of address for French government ministers, it is likely that similar terms were used by French ambassadors and diplomats when addressing ministers of the foreign governments they communicated with. Frey and Frey note that diplomats were urged

"to avoid any difficulties over etiquette"

Andress on Rapport, 'Nationality and Citizenship in Revolutionary France: The Treatment of Foreigners 1789-1799'

It depends on the situation. If you talk with a person in the street, you do not really know his/her citizenship status. If you talk officially with a foreign diplomat, you address him as he is expected to be addressed in his own country.

The situation was analogous in Soviet Union. There were two forms of addressing: "tovarishch" (camarad) and "grazhdanin" (citizen). Originally "tovarishch" was used by the members of the communist party to address each other, but later spread wider. The neutral form was "grazhdanin", and of course no one really cared what your real citizenship is.

Not the answer you're looking for? Browse other questions tagged political-history 18th-century language french-revolution or ask your own question.