Were the mongol army boots of 13th century lined with fur?

I want to know about 13th century Mongolian army boots.

I know they used leather for their boots. The leather and the source of the leather is irrelevant to my research for now.

My question is that did they use any type of animal fur ( e.g. cow fur) in making their boots?

If yes, then did they use it on the interior of the boots or the exterior?

According to The Field Museum's Genghis Khan online exhibit... 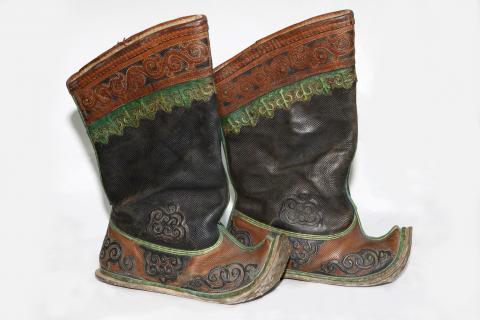 These centuries-old leather boots are like those worn by warriors in Genghis Khan’s empire and nomadic Mongolians today.

For battle, these felt-lined leather boots were often covered with armor plates as well. The turned-up toes signify respect for the land by minimizing the mark they left on the ground.

While the boots in the exhibit are not 13th century, the exhibit states they are of a similar style. The leather would likely have come from cattle or yak. So yes, "cowhide".

(As a side note, Discover Mongolia offers a different explaination for the upturned toes: "it's also true that boots are so thick and rigid that if they were flat, they would be almost impossible to walk in.")

Multiple pictures posted in support of this question confirm that the outside of the boots were slick - the hair-on side could not have been outside. (simple logic dictates that the hair should go on the inside to keep the foot warm - hair on the outside isn't going to trap any heat. Hair on the outside might work for fashion, but the images indicate that the Mongolian fashion was for bright dye.)

Not the answer you're looking for? Browse other questions tagged military mongol-empire mongolia or ask your own question.

28
Have there been any notable battles fought with steel vs. bronze weapons?
14
What are some examples of US states warring with one another?
9
How effective were the Mongol siege equipment?
19
Who was the English Knight Templar holding command in the Mongol Army?
22
Were Mongol or Chinese cavalry charges among the largest in history?
12
Why were fragments of the Mongol empire named after colors?
1
What were common crew ranks on US Navy flying boats and bombers?
26
Why was the northern boundary of the Mongol empire set where it was?