Why was the Polish 1st Parachute Infantry Brigade dropped at Driel on the South bank of the Rhine?

This seems like dissolution of troops, which may not be good especially when the rest of allies were already in defending positions.

The Poles were supposed to be dropped in on the 19th, the third day, near Elden and attack the southern approaches to the bridge. A lack of gliders and transports meant they could not be dropped on the first. Bad weather and a further lack of transport delayed this drop until the 20th when the plan changed suddenly.

...a little before 7 a.m. on the 20th, Major-General Stanislaw Sosabowski [commander Polish 1st Independent Parachute Brigade] learned that his drop zone had been changed. The Polish Brigade would now land in an area a few miles west of the original site, near the village of Driel...

There was still very little news from Arnhem but, as Stevens briefed him on the new plan to ferry his troops across the Rhine from Driel to Heveadorp, it was obvious to Sosabowski that Urquhart's [commander British 1st Airborne Division] situation had taken a turn for the worse...

The Polish drop on the 20th was aborted due to bad weather, but they were finally off on the 21st.

On this Thursday [the 21st], the outlook was slightly brighter... The Nijmegen bridge was safe and open; the tanks of the Guards Armoured were on the way--and, if the weather held, 1,500 fresh paratroopers of General Sosabowski's First Polish Brigade would land by late afternoon. If the Poles could be ferried quickly across the Rhine between Driel and Heveadorp, the bleak picture could well change. 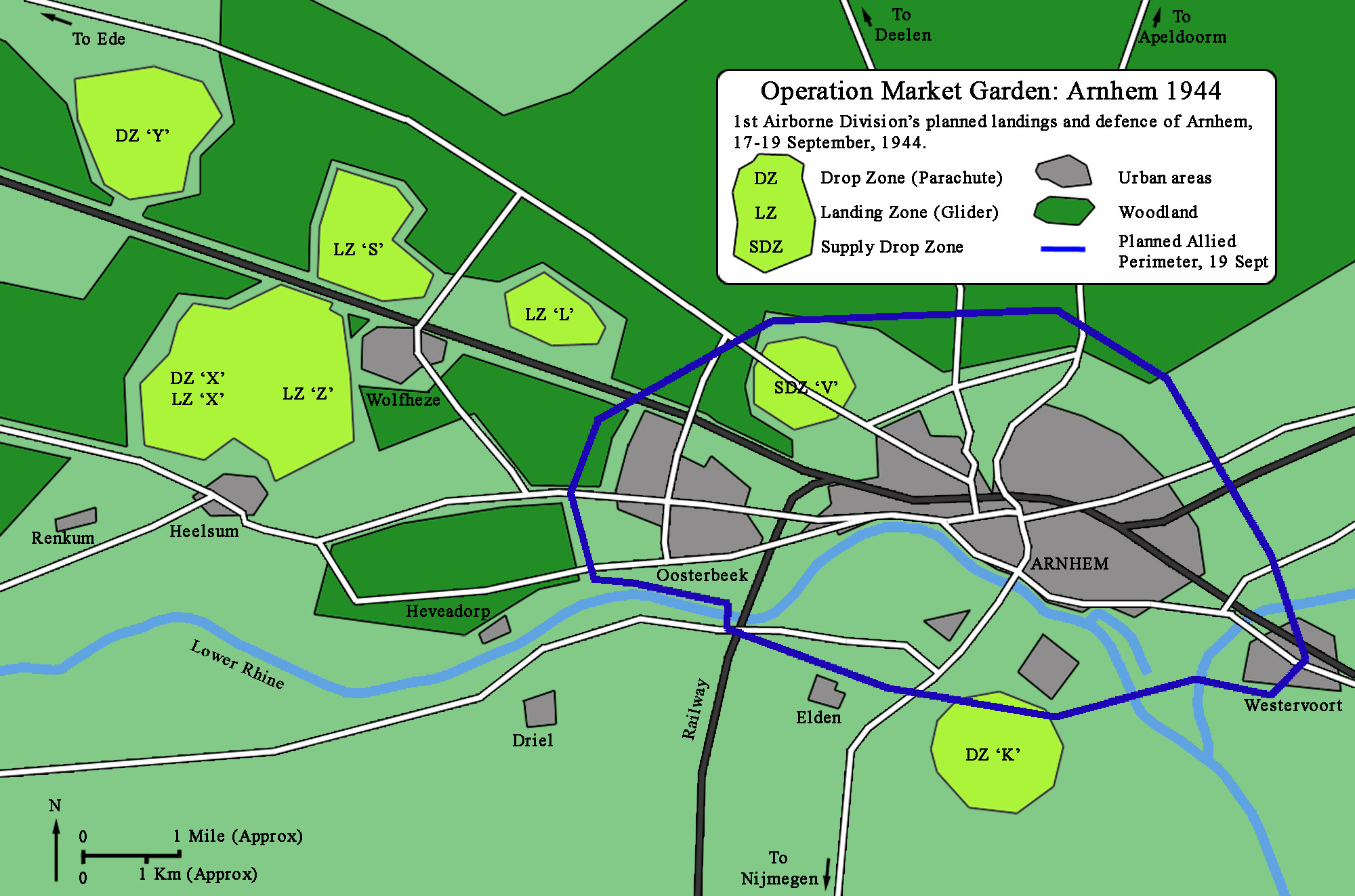 But they found the ferry missing, the approaches covered with German AAA and fighters, and the drop zones crawling with Germans. The planned crossing of the Rhine failed.

Ironically a morning patrol by 1st Airborne discovered the ferry was missing, but the Poles were already en route. The ferry was found later, its moorings had been cut by artillery, just a few hundred yards beyond the search area.

The Germans recognized the threat to their flank and counter-attacked the Poles sapping German strength away from Oosterbeek. Over the next couple days they got a few hundred men across, only enough to cover the 1st Airborne's withdrawal.

Operation MARKET GARDEN was forced to make drops on separate days because they couldn't drop an entire airborne corps in a single day. Not enough aircraft, not enough airbases, not enough drop zones, the airspace getting crowded over the drop zones.

When it became a bridge too far, as the movie put it, it became a question of helping to extract the paratroops on the north bank.

The Americans published Airborne Operations in World War II, European Theater. This is from the US viewpoint, but it puts the various problems into context.

35
What was the reason for Soviet troops to withdraw from Yugoslavia in World War II?
18
Have Germany and Poland ever signed a peace treaty after WWII?
30
Was the Italian campaign a strategic mistake?
6
Why was the FSSF (Devil's Brigade) multinational?
12
Were the events in Nemmersdorf a PR stunt of the Nazi propaganda?
14
Is this Hitler's account of seemingly counterproductive British radio war propaganda true?
2
Why did Allied Command maintain passive, especially Indian units in Middle East during the years 1942 and 1943?
42
Why was capturing the south of Okinawa necessary?