What does King Henry III have on his lap in this illustration from a Matthew Paris chronicle?

In Abbreviatio chronicorum Angliae, the chronicler Matthew Paris (d. 1259) included drawings of the Norman and Plantagenet kings up to Henry III. The image below shows from L-R, top-bottom: Henry II, Richard I (‘the Lionheart’), John I (‘Lackland’) and Henry III 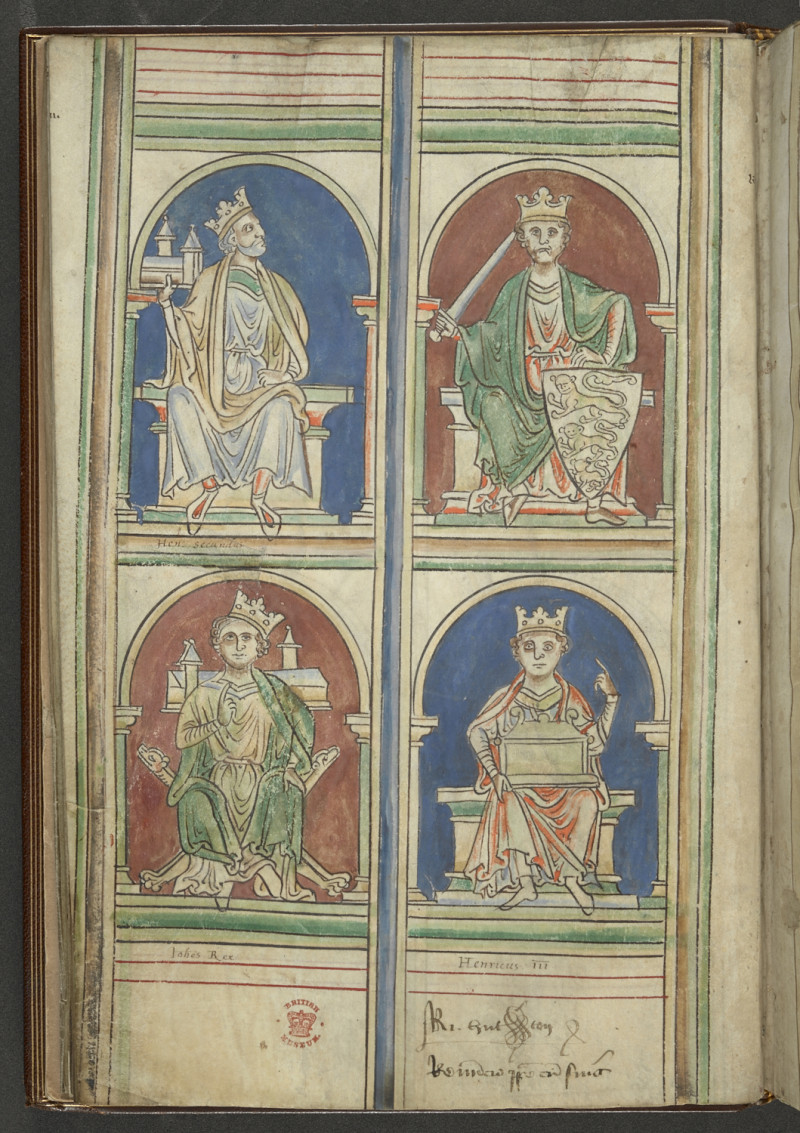 Source: Matthew Paris and his Abbreviated Chronicle of England

Henry II and John are shown with buildings; these may be ones of which they were patrons of, as in the Historia Anglorum. Richard I has a sword and shield, which seems easy enough to explain. Henry III's 'object' is less clear, though. There seems to be some kind of chest on his lap.

What does Henry III have on his lap, and what is his connection with it?

Also, can anyone identify the buildings shown with Kings Henry II and John?

This is really a chest.

Which chest may be debatable, but it is a quite naughty allusion nonetheless, highlighting what Matthew thinks of Henry, and where he expects his priorities to have been.

For once, Matthew was highly critical of Henry and constantly bemoaned any form of government. He seems to have disliked anything else 'the state' might do, except for hanging thieves. But under Henry government expanded greatly and in Matthew's eyes Henry was even especially greedy and guilty of avarice.

To get the money into his chests, Henry was also developing a new method of acquisition: plundering communal chests were debt records would be kept, with a special liking of erasing Jews as creditors.

Of course, that is not the only possibility. These chests were also used to store any other kind of important documents, and thus a symbol of growing bureaucracy. But the painter's ferocity towards what he saw as Henry's attitude about money and debts, together with the general obsession around that time for such chests's contents makes a money-debt relation more plausible.

Matthew's view of the State, often referred to as his constitutional attitude, seems also to be based on his own material interests and those of his house. All forms of taxation are violently opposed and invariably regarded as mere royal extortion, even when the tax has been agreed to by the universitas regni. For instance, we are told that Henry III extorted' (fecit extorqueri) a scutage in 1242, whereas in fact this had been agreed to by the barons. Matthew's hatred of taxation leads him to oppose other aspects of government as mere tyrannical interference on the part of the king, and both forest inquisitions and itinerant justices are bitterly complained of. The latter are regarded merely as financial agents and Matthew refers to a sum of money raised by Henry III in 1254 with the words "…whatever he could extract from the rapines of the itinerant justices". He complains too of the administration of vacant bishoprics, and regards the government's inquiry into weights and measures in 1256 purely as a device for raising money.

Henry III receives only slightly better treatment, and it is a remarkable fact that, though Matthew knew him personally, and was honoured and befriended by him more than once,6 his ideas about Henry remained inimical and offensive. No doubt much of the opprobrium which he heaps on Henry is an inevitable result of his political prejudices: any king who tried to govern at all would be bound to incur Matthew's wrath, for he strongly disapproved of all the activities of government except that of hanging thieves.

Henry, according to Matthew, was avaricious in the extreme, tyrannical, weak-minded, and perfidious; he enjoyed flattery and practised favouritism; he was contemptible in his subservience to the pope and in his military expeditions to Gascony; he was an enemy and plunderer of the English Church, who preferred his queen's foreign relatives to his own natural counsellors. This picture of Henry III will not bear close examination. Take, for instance, his supposed avarice. Matthew calls him 'a vigilant and searcher after indefatigable money', and a new Crassus, and is constantly inveighing against his greed.

A practice when ordered by the king might have been profitable, but such an example also inspires others:

In London they killed every Jew that they met, except those who accepted baptism, or paid large sums of money. They took from Cambridge all the Jewish bonds that were kept there, and deposited them at their head-quarters in Ely. At Lincoln they broke open the official chests, and "trod underfoot in the lanes, charters and deeds, and whatever else was injurious to the Christians." 1 "It is impossible," says a chronicler, in describing one of these attacks, "to estimate the loss it caused to the King's exchequer.
— Lionel Abrahams: "The Expulsion of the Jews from England in 1290", The Jewish Quarterly Review, Vol. 7, No. 1 (Oct., 1894), pp. 75-100.

One of countless examples for plundering such a chest:

22 Nov. St. Albans. To the justices assigned to the custody of the Jews. The king, of his special grace, has remitted to his beloved and faithful Thomas of Moulton, who is devoted to him and is always prompt in his service, all fees, payments of interest and penalties in which he or his ancestors were bound to any Jews whatsoever in England, namely for the money that he or his ancestors took as a loan from the abovesaid Jews for which they are bound to satisfy them, about which money it is believed Thomas has sworn an oath before them and other trustworthy men sworn to this. Order therefore to cause all Jews who are presently in the kingdom or the heirs of those who are dead, to whom Thomas or his ancestors were bound in any debt, to have certain days and places to come before them, to cause all charters by which they were bound to the abovesaid Jews in any debts or fees to be extracted from the chests containing the chirographs of the Jews and delivered to the abovesaid Thomas, to cause him to be quit from the aforesaid fees, interest payments and penalties, and to cause this to be done and enrolled thus, on condition, however, that he shall satisfy the same Jews for the said money accepted thus as a loan from the abovesaid Jews at the reasonable terms which they [the justices] will assign to him, and on condition that the said money does not accrue interest. If the abovesaid Jews or any one of them has died whereby their chattels are the king’s escheats, then Thomas shall satisfy the king for this at the Exchequer.

The dictionary entry for such a chest reads:

Chests, L. Archae
The burning of the Jewish bonds in *York Minster by Malebisse and his associates in March 1190 led Richard I’s justiciar, Hubert Walter, to regulate loans, as outlined in the *1194 Articles about the Jews. The original intention was to establish archae, communal chests, at ‘six or seven places’, where *chirographs recording Jewish bonds were to be deposited. At each centre the chest was to be administered by ‘two lawful Christians, two lawful Jews and two lawful scribes’, each pair to hold the key to one of the three locks. To be enforceable in the royal courts, every loan had to be registered on a roll kept by the chirographers. […]

The first two sections of the 1233 Statute concerning the Jews sought, ineffectually, to replace the use of tallies by three-part chirographs. There were further attempts to tighten up the administration of the chests in 1239, to prevent fraudulent and clandestine transactions. This was never achieved. As late as 1279 the close rolls refer to ‘chirographs, bonds, tallies, charters, feoffments, stars and all other instruments’ in the chests.

The exchequer sought to monitor the financial activities of both communities and their chirographers. In 1239 royal clerks from Westminster began to scrutinise and enrol the bonds within the chests, which were closed for this purpose. When Jews failed to meet royal tallage demands, the exchequer would command the *sheri s, or chirographers, to extract their ‘better and sounder debts’, so that their Christian clients could be distrained directly from Westminster. For the system to work effectively, the exchequer was dependent on the full support of its local representatives, the sheriffs, who not infrequently had their own agenda.

The chests and their records became principal targets of Simon de Montfort’s supporters during the baronial wars, 1264–66, and subsequently of the Disinherited, as at Bedford, Bristol, Cambridge, Canterbury, Lincoln and Worcester.

Following the 1275 Statute of the Jewry the chests were again closed for a general scrutiny. Although *usury was banned, sums due on existing loans remained. The chests therefore remained open, and there was a further scrutiny in 1279. As Richardson explains, New Chests were opened c.1283 for bonds that complied with the Statute. Next year the close rolls carried a command, that all chests should be closed on 28 January until further orders, and all Jews living in cities or boroughs without a chest should be removed. In February 1286 ‘all the chests of Jews’ in London, and probably other communities, were to be opened and examined. The order to close all chests in June 1290 thus gave no hint of the general expulsion that was to follow.
> – Joe & Caroline Hillaby: "The Palgrave Dictionary Of Medieval Anglo-Jewish History", Palgrave Macmillan: Basingstoke, New York, 2013.

As to the church buildings:

Henry II was mainly supporting the church in France, and the two most likely candidates on the Island would be continuously supported Reading Abbey and the atonement donation after the Becket affair Waltham Abbey Church in 1177–1184. The important detail is that he looks away.

For John the trouble is finding any church as suitable candidate for this. John is mainly known for the opposite. (Although Wikipedia uses that image for St Peter's Collegiate Church) But in keeping Matthew's distance towards royal authority, I guess the most important thing to observe is that John does not donate a church in that picture, he is in front of it! That may be another hint, this time at John's dispute with the Pope?

He must have been, we feel, a friendly, sympathetic person, with a robust sense of humour sometimes bordering on the burlesque. Often we cannot tell whether or not he wrote with laughter in his eyes. Was it in fun that he took care to insert the drooping eyelid into his drawing of Henry III among the other kings of England? His language is often picturesque and amusing. He was an excellent raconteur, and his gossip is often inspired even when it is worthless and malicious. As for malicious gossip, we cannot deny that Matthew was an accomplished scandalmonger. His dislikes often take the form of slanderous remarks or stories which make us feel bound to attribute to him something of the vicious and spiteful.
— Vaughn, 1958, p264

Not the answer you're looking for? Browse other questions tagged middle-ages england identification monarchy or ask your own question.

15
Was King Henry VIII, mid-late in his reformation campaign, motivated more by theology or absolutist drive?
4
Why did Henry I imprison his older brother and rival Robert for almost 30 years instead of having him killed?
9
Which Kings of France visited England?
22
Who are the three men standing and what are they holding at this University of Paris Doctors' Meeting?
9
Aside from Henry VIII, did a king ever take part in a joust as an unknown knight (incognito)?
13
What profession(s) would have used this folding 'ruler'?
9
How were de jure lands determined during the Middle Ages in Western Europe?