What is known about what people used to wear in the city of Palmyra during the third century AD? Was it more similar to Roman or Persian fashion of the period?

In general, people in Palmyra dressed either in the Parthian style or the Greco-Roman style; sometimes these styles were mixed.

An important trading centre which derived much of its wealth from the Silk Road, Palmyra was a multi-cultural city, influenced by both east (especially Iran) and west (Greece and Rome). This is reflected in the clothing they wore, but there was also a distinctly local style; in short, it’s a complex picture and generalizing is difficult. As Marybeth Osowski, in Fashioning Identity: Clothing and the Image of the Syrian in the Roman Empire, states:

The standard visual image of the Near East in Greek and Roman depictions features elements such as long-sleeved tunics and ankle-length trousers, bright colors and elaborate patterns or decorations, and other items like pointed hats or turbans also feature but are not universal.

The best visual evidence we have of clothing in 3rd century AD Palmyra comes from funerary monuments. However, these cannot be considered entirely representative of the population as a whole but rather of the local elite and wealthier residents, most likely wearing their finest clothing. Further, we can’t be sure to what extent these may have been idealized representations of what people actually wore. Lastly, there is the issue of status, and of how people wished to be seen in different social and cultural situations.

Generally speaking, there two styles of Palmyrene attire: one is termed Greek or Greco-Roman, the Parthian or sometimes Persian.

For Greek or Greco-Roman, the article The ancient people of Palmyra, Syria says:

The men wore a chiton (tunic) and himation (cloak) of linen or wool. The cloak was usually draped so as to provide a support for the right hand. The women also wore a long tunic over which a cloak was draped. The cloak was held by a fibula (brooch) on the left shoulder, and over it all a long veil covering the head, shoulders and arms. 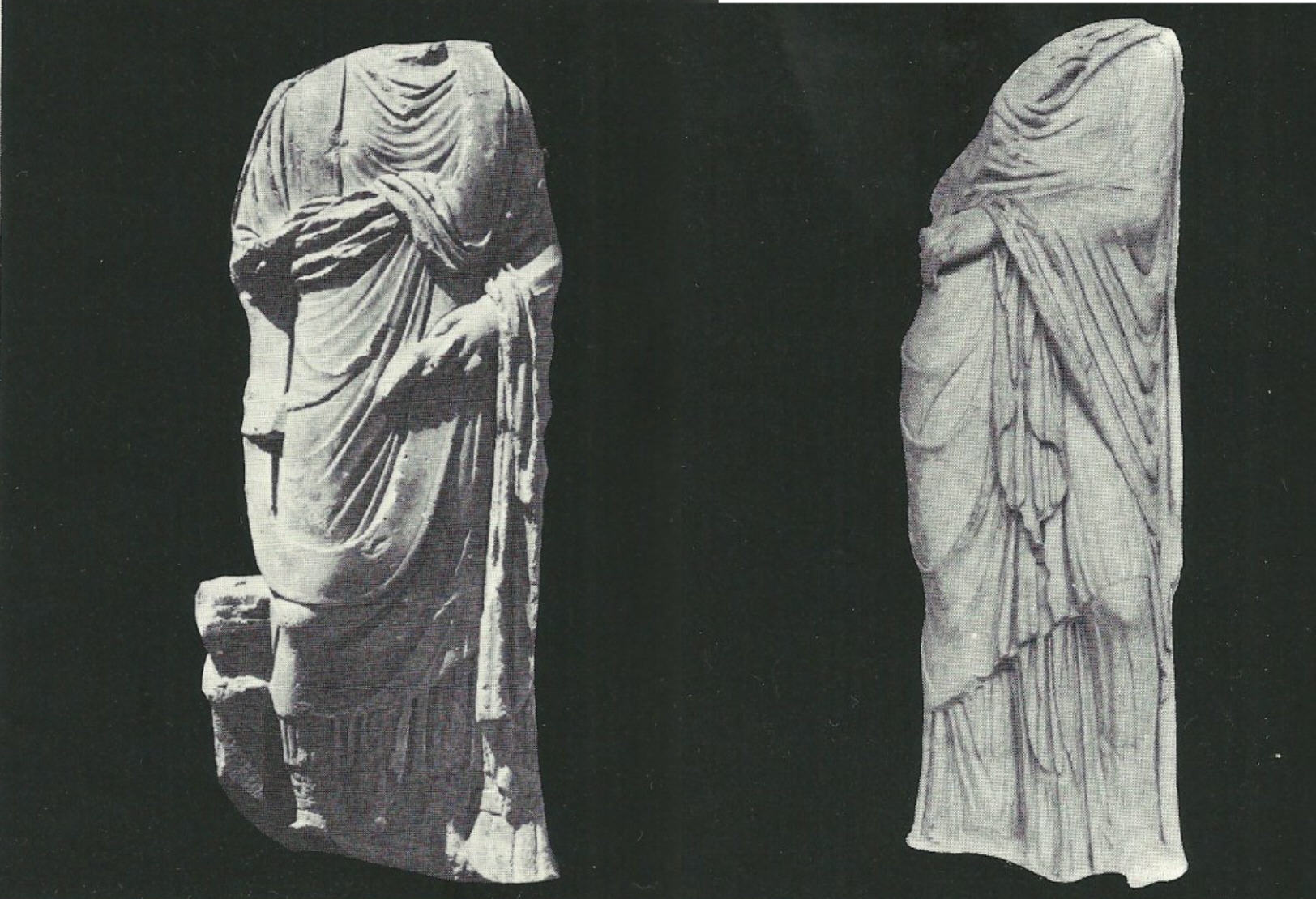 This UNESCO site on Palmyra describes the Parthian style as follows:

Parthian.... consisted of a long-sleeved tunic, short, belted and split at the sides, and trousers that were tight at the ankles, with supple boots. Unlike the usual Greek fashion, this style is highly decorative with bands of ornamentation on the tunic and along the limbs. A cloak was worn over the tunic. The women also wore a long, belted tunic with either tight or full long sleeves with a decorative cuff, or without sleeves, like that of the men. 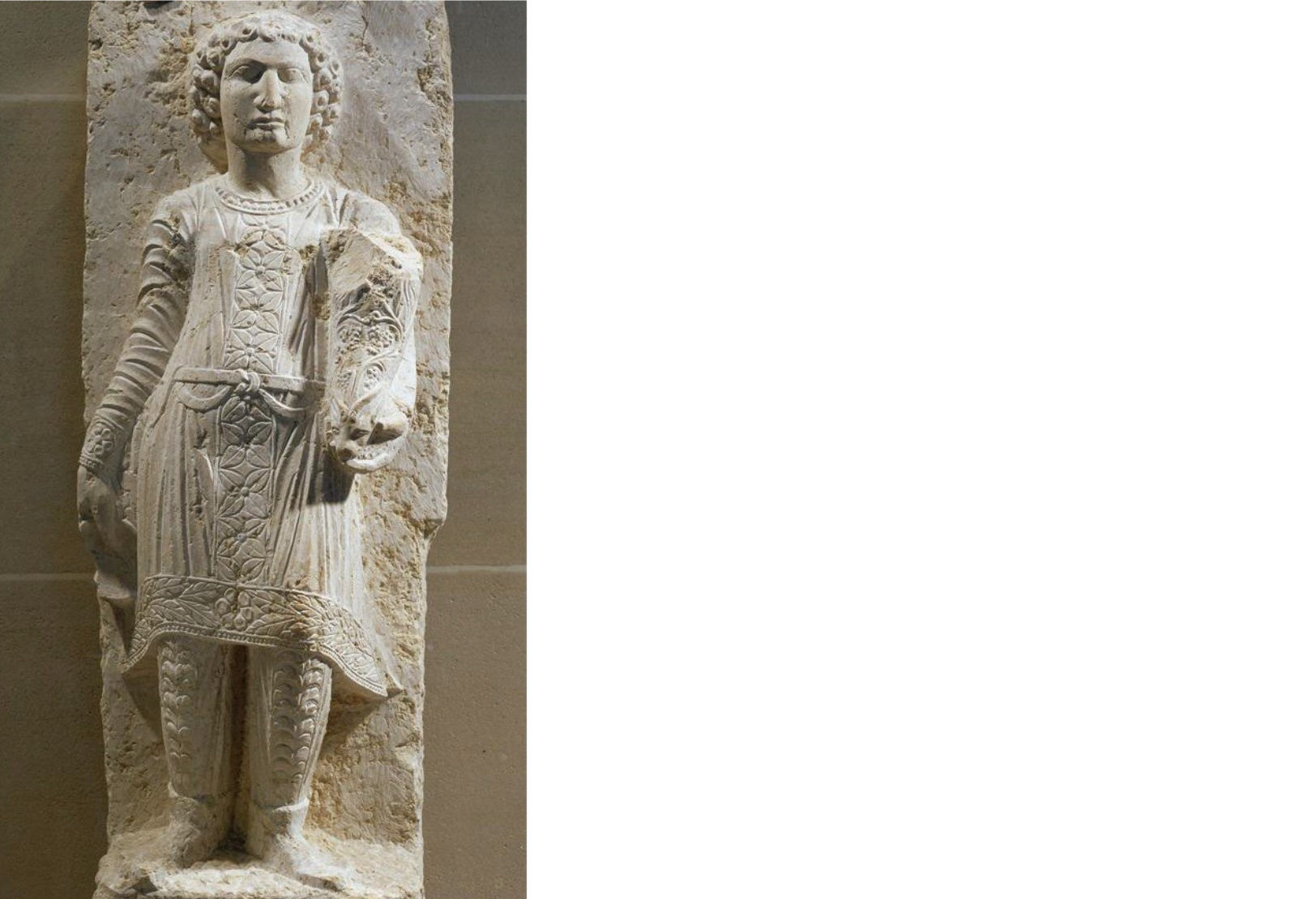 In his description (which focuses on the Parthian style), the French historian Paul Veyne makes a comparison to Persian attire, saying that, although Palmyra fell within the Roman empire,

Local residents weren’t dressed like other inhabitants of the empire. Their clothing wasn’t draped but sewn like our modern clothing, and men wore wide trousers that looked a lot like those of the Persians.... The women wore full-length tunics and cloaks...they wore an embroidered band around their heads, with a twisted turban on top. Others wore voluminous pantaloons. Their faces weren’t veiled, as was the custom in many regions of the Hellenic world.

Although little clothing has survived, bits of patterned cloth, wool and Chinese silk and cotton have been found, some on mummified bodies.

Citing funerary portraiture, Osowski notes that the inhabitants of Palmyra are shown in a range of attire and that this often varied depending on the scene depicted on the funerary monument:

There is also evidence of combining Roman and Palmyrene styles, as in a statue showing a man in a toga and with a Palmyrene priestly hat. This mixing of styles is even sometimes evidenced in depictions of deities. One such example shows a Syrian lunar god

wearing a Hellenistic-style cuirass, distinguished by its marked navel, and a conventional military-styled short cloak.

In female portraits, the distinctive combination of a diadem and a turban is one of the major non-Greco-Roman items of clothing seen in the art of Palmyra....lasting up until 273 AD.... the veil in Palmyra may have been a similar covering to the palla in Rome,...

Lastly, Veyne, the article The ancient people of Palmyra, and Osowski note the preponderance of jewelry depicted in monuments, and the latter also says that this display of wealth increased noticeably during the 3rd century. 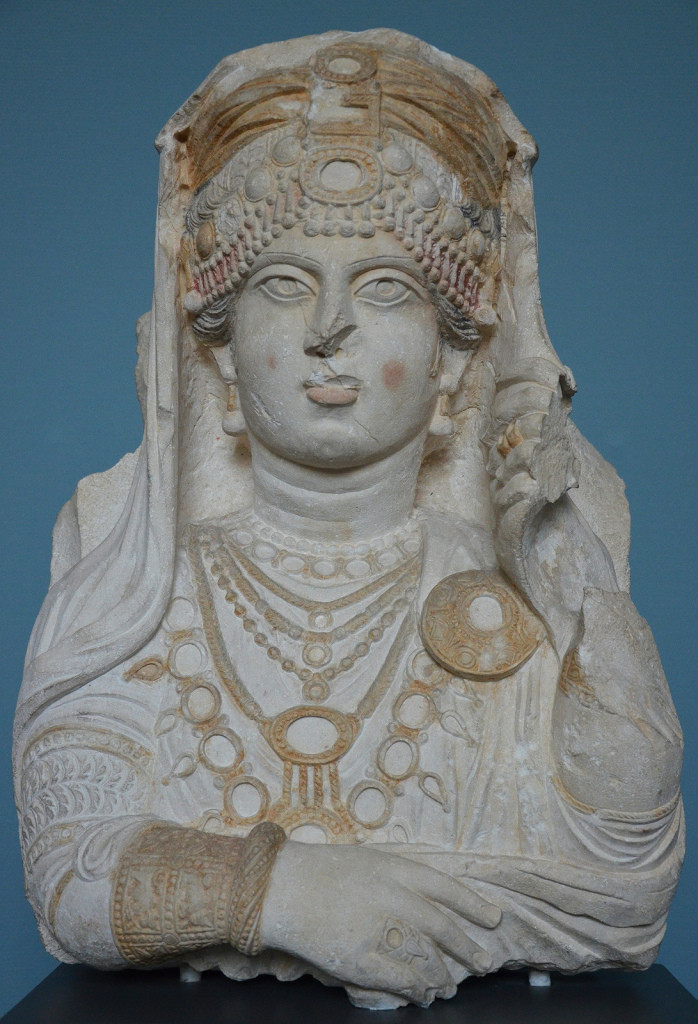 Not the answer you're looking for? Browse other questions tagged ancient-history middle-east everyday-life clothing syria or ask your own question.

1
Would a Syrian King have worn the toga after the Edict of Caracalla?

23
What was the legal framework in Ancient India?
14
Military training in the Hijaz during early Islamic era
4
Korean Traditional Clothes for each Dynasty
25
Is there any evidence of STD's in ancient times?
15
What words were obliterated from the Great Colonnade at Palmyra?
4
Was the use of imperial nicknames in ancient Rome meant as an insult?
6
What did ancient Romans wear when sleeping?
4
Did Ancient Romans use metal thimbles? What were they like?
13
What did the ancient Eastern world think of the ancient Greeks?