How far would the average Silk Road caravan travel during the early reign of Justinian?

So what I am asking is not the total travel distance that the Caravan would travel in a lifetime; instead I am asking how far they would tend to go one-way on a two-way trip and how long that trek would normally take. The Indian ocean trade is not included and I am only speaking of the routes that go from China to east Rome.

I originally wanted to close this as a duplicate of this question, How was security on the Silk Road between China and the West maintained?, because the primary answer answers this question as well:

Few people ever traveled the full length of the Silk Road. The goods were transported by a series of routes and agents. This mode meant that local agents, familiar with terrain, politics, and bandits of their own region, who were better suited for the task, would ensure safe transit.

The above also is a reason why Marco Polo's 13th century traversing of the entire route is so remarkable—we get impressions from the entire route. However, this question here dealt with a much earlier period—namely, the mid-7th century as the time of interest as I liberally interpreted "Justinian" as "Justinian II" as there is very little evidence (as far as I know) for the mid-6th century.

Justinian II's mid-7th century was the high period as specified in Valerie Hansen's 'The Silk Road' that focused on a number of locations between Samarkand and the westernmost Tang outposts. It is my impression from that book, though I read it a while back, that pre-Tang unification and garrisoning of the outlying border which opens to the Taklamakan Desert, the 'Silk Road' as a trade route was essentially inoperable. Tang unification was relevant because they paid their troops in silk which was then traded to caravans that moved between the various oases around the Taklamakan, which can probably be considered the most difficult part of the journey.

Approximate routes are drawn onto this map: 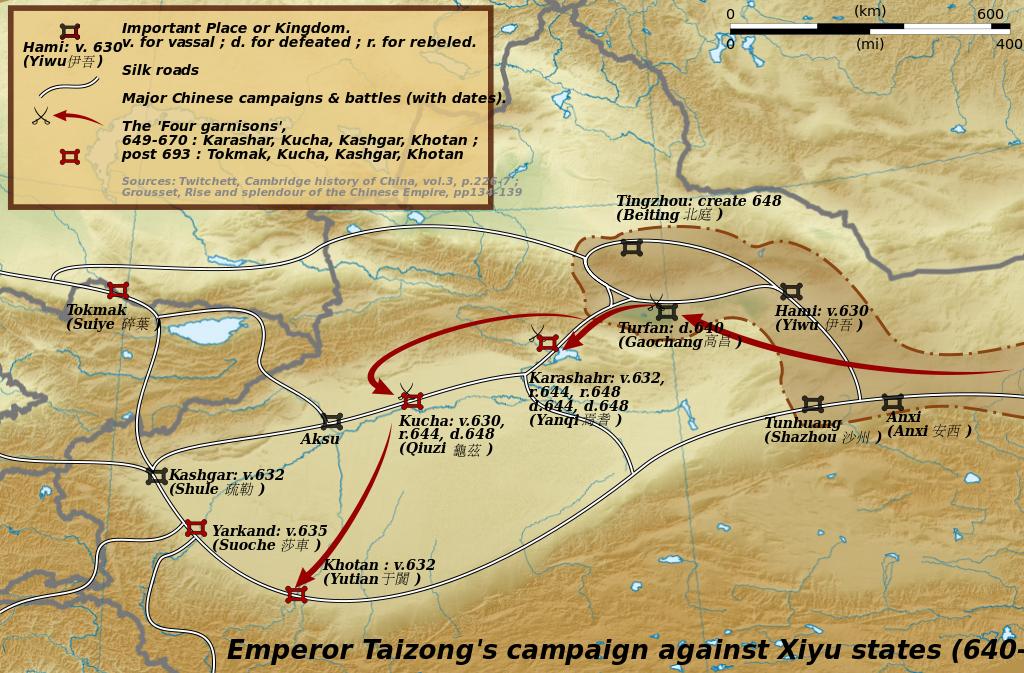 Undeniably, the Chinese-language materials from Duldur Aqur are limited. Totaling only 208 documents, many of them consisting of a few characters, they touch on a surprising range of activities. The historian who has translated these documents ... summarizes their content: "... absense of identifiable commercial documents. No lists of goods destined to be commercialized. No travel documents like the many travel passes for caravans found near the postal station at Yanshuigou. ..." Yet for all their variety, they do not mention anything that looks like the conventional portrait of the Silk Road trade—no private mercants carrying vast quantities of goods across long distances. Trombert believes that Kucha was a center of commerce, but that the merchants traveling there stayed within the city or outside the oasis—not at Duldur Aqur, which is why no commercial documents survive.

Yet, like Duldur Aqur, the much-better-documented sites along the Silk Road also lack documents about long-distance trade. ... the Chinese army's demand for horses constitued a major component of that trade. ...

The surviving evidence from Kucha, as partial as it is, suggests an alternative to the standard picture of the fabled Silk Road trade: rather than a long-distance trade initiated and staffed by private merchants, these materials indicate that the Chinese military contributed significantly to the Silk Road economy. When Chinese armies were stationed in Central Asia, money—in the form of coins, grain, and cloth—flowed into the region. When the Chinese troops withdrew, small-scale trade resumed, largely maintained by local travelers and peddlers. ... Few individuals traversed all of Central Asia, covering the distance of some 2,000 miles (3,600 kilometers) between Samarkand and Chang'an. ...
–Hansen, 'The Silk Road'

Hence Taizong's campaigns are quite relevant, including the garrisoning of the same desert outposts.

Trade to the east of Anxi would have been heavily governed by Tang officials by issuing travel passes and only permitting a limited number of foreign caravans into the interior of the country.

Not the answer you're looking for? Browse other questions tagged trade travel medieval-china central-asia eastern-roman-empire or ask your own question.

17
How was security on the Silk Road between China and the West maintained?

31
Why didn't the silk road run north of the Black Sea?
17
How was security on the Silk Road between China and the West maintained?
3
How would residents of Central Slovakia travel to seaports in 1880's?
2
In epic migrations, why keep going?
15
Where did the Roman money involved in the spice and luxury trade end up?
3
What is the average travel speed for railways between European capitals in the late 19th century?
6
What was the typical speed of a tramp steamship?
2
Why didn't Indonesians/Indian Ocean traders bring marsupials to Asia and placental mammals to Australia/New Guinea?