According to KnowYourMeme, among others, a relatively young Stalin is so good looking in a certain picture that he is often referred to as "sexy Stalin": 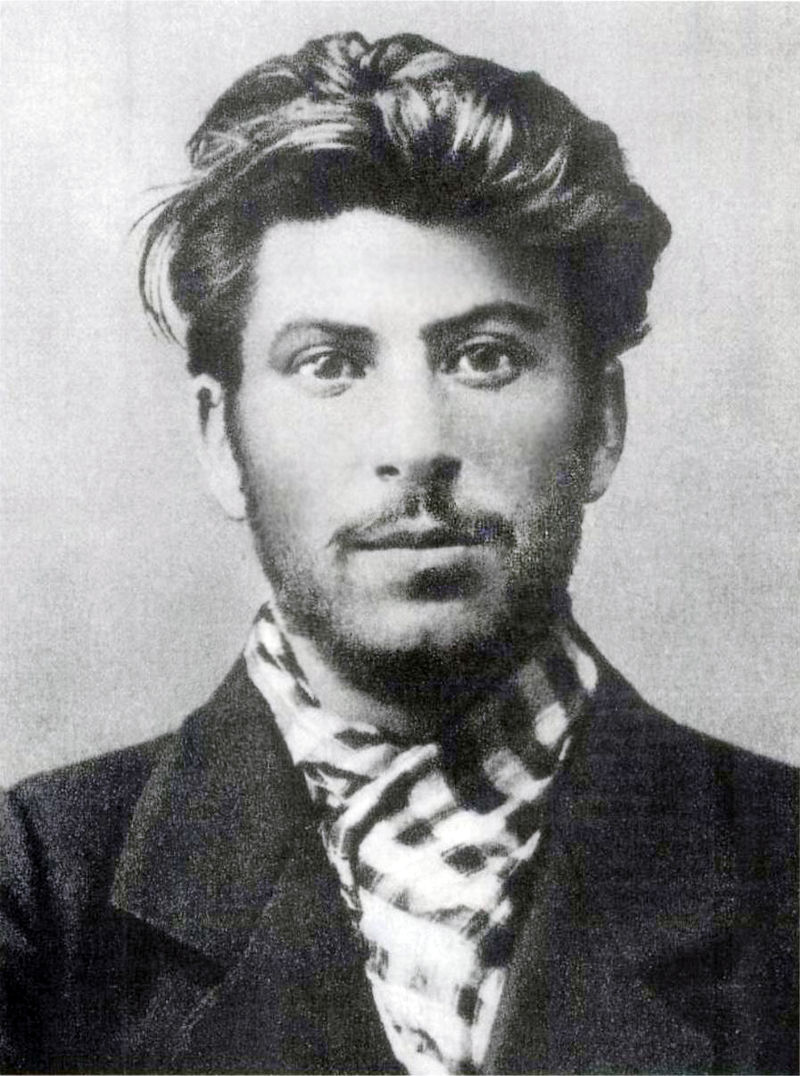 This is indeed a pretty picture of a young man with quite a smooth face (1902, 23 years old). There is however a problem with this picture. It has to be a doctored photo. Although this photo is often judged to be "authentic", the face is a bit too smooth. He had a quite disfigured skin due to smallpox or chicken pox, depending on which version of Wikipedia you trust more. Regardless, the result of this childhood infection was quite a scarred face: 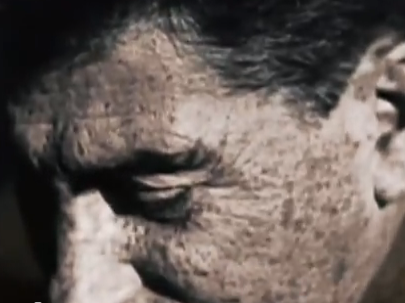 From: Dermatologie Stalin: Psoriasis and Facial Scars (from Smallpox)

While it is a hopefully well-known fact that after he really came to power in the Soviet Union, many photos were retouched to make him look more attractive, more friendly, closer to Lenin, etc.

What I want to know is:
when was the photograph of "sexy Stalin" altered?

Was that a service offered by the original photographer in 1902? If so, then that seems to be a wide spread/standard service? In the case for this picture that is quite unlikely, as it is a mugshot (but compare another one from 1911) taken by the police from Batumi. Was it done after the fact that he came to power? If so, did they really get their hands on all of those photos to retouche them?

The latter seems quite unlikely. Given that the StalinMuseum has some less obviously altered images of him (example), the museum still only has this "sexy Stalin" photo from his 23rd year. 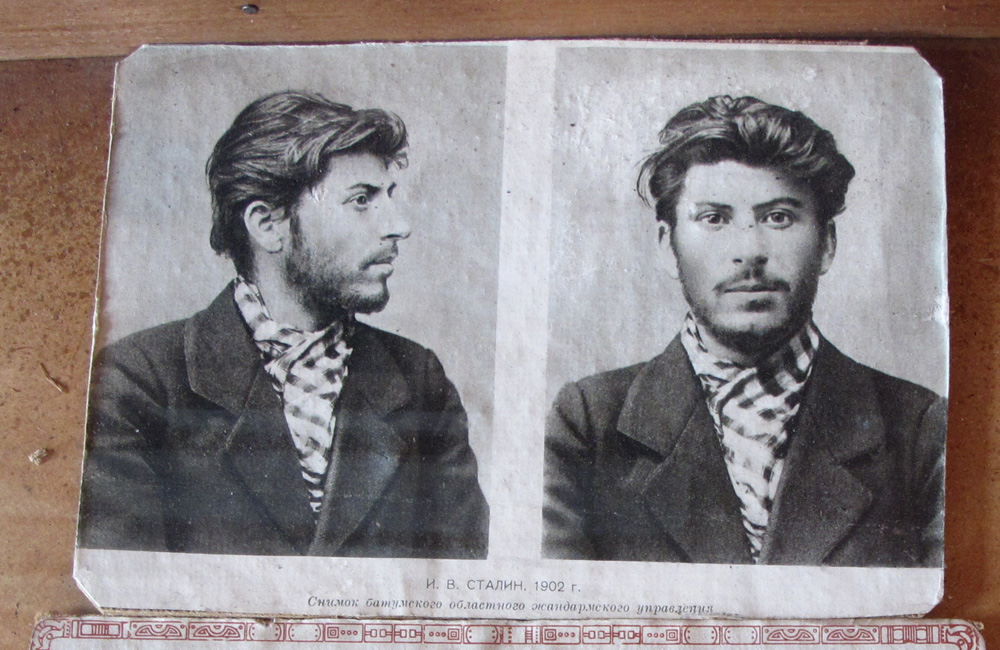 Apparently the photo as is on display offline at the museum

Or is there an unaltered version of this picture somewhere?

So the picture is featured on the cover of the book Young Stalin copyrighted 2007. It appears on both the front and back covers.

In the credits of that book it says the mugshot is from 1912, not 1902 and it's originally obtained for the book from the David King Collection.

David King being a graphic designer and design historian who amassed one of the world’s largest collections of Soviet political art and photographs, which he drew on for revelatory books on Leon Trotsky and the Stalin era, died on 2016 in London.

I found this photo which appears to predate the above book.

It was posted on wikipedia back in 2005 and is credited to a book published in 1950.

Looking at that image it appears it was changed extensively by wikipedia users, with the latest version coming from the Stalin Museum in Georgia. The Stalin Museum in their gallery of photo's of Stalin, contains several other photo's of the younger Soviet leader. All photo shopped to remove his small pox scares. I could find no photo's of young Stalin with smallpox scares so maybe he had all of them photoshopped.

I found a few younger stalin photos which were interesting. 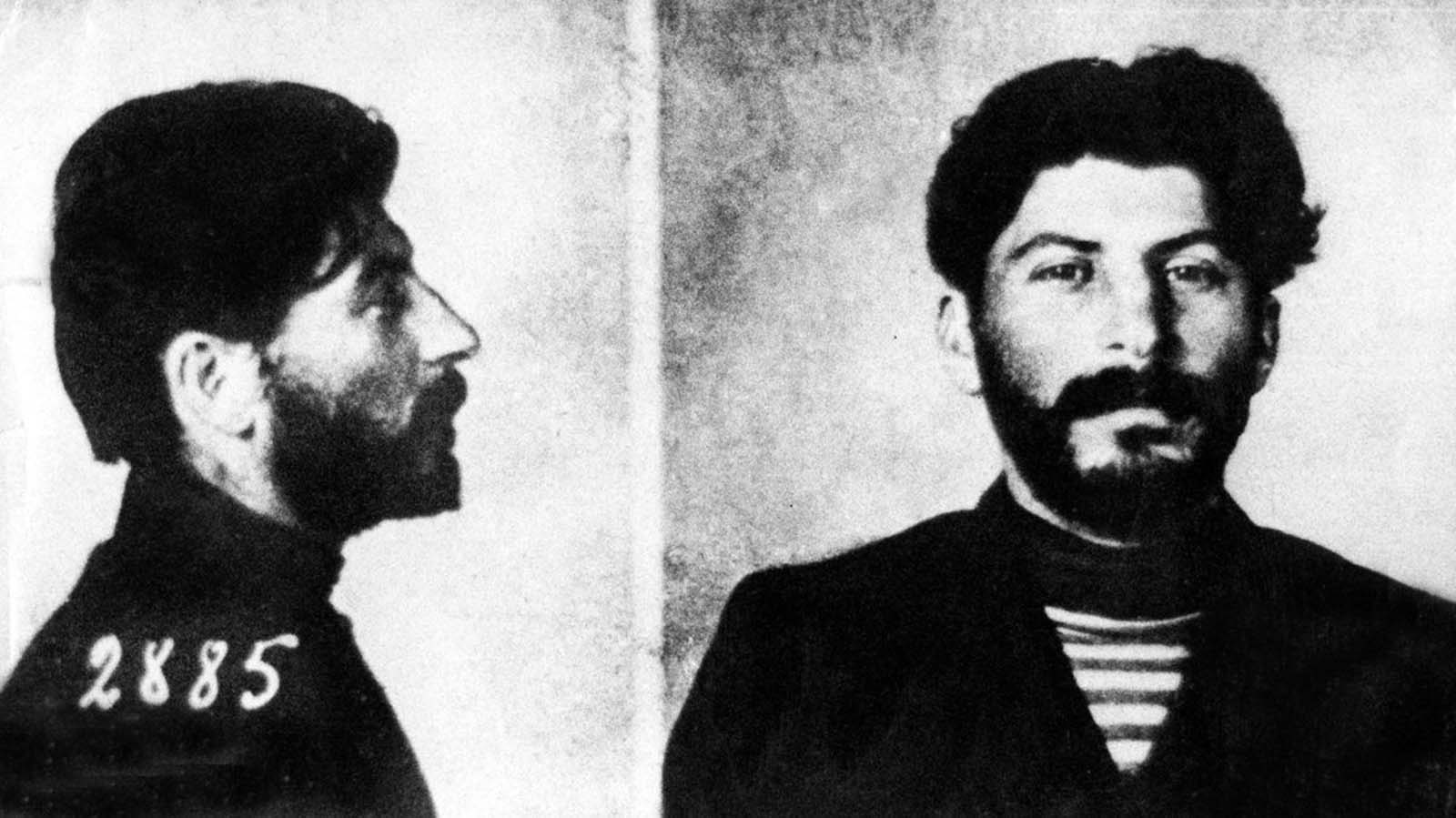 Mugshot of Stalin after an arrest. 1908. 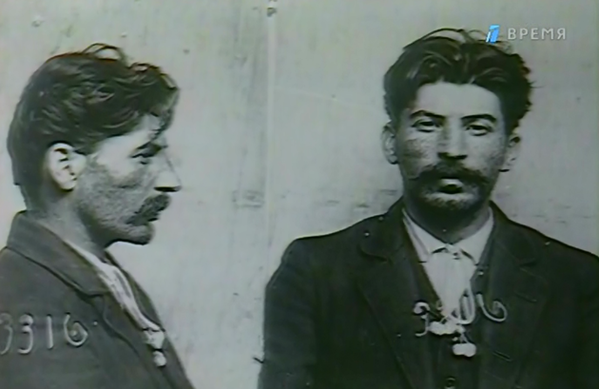 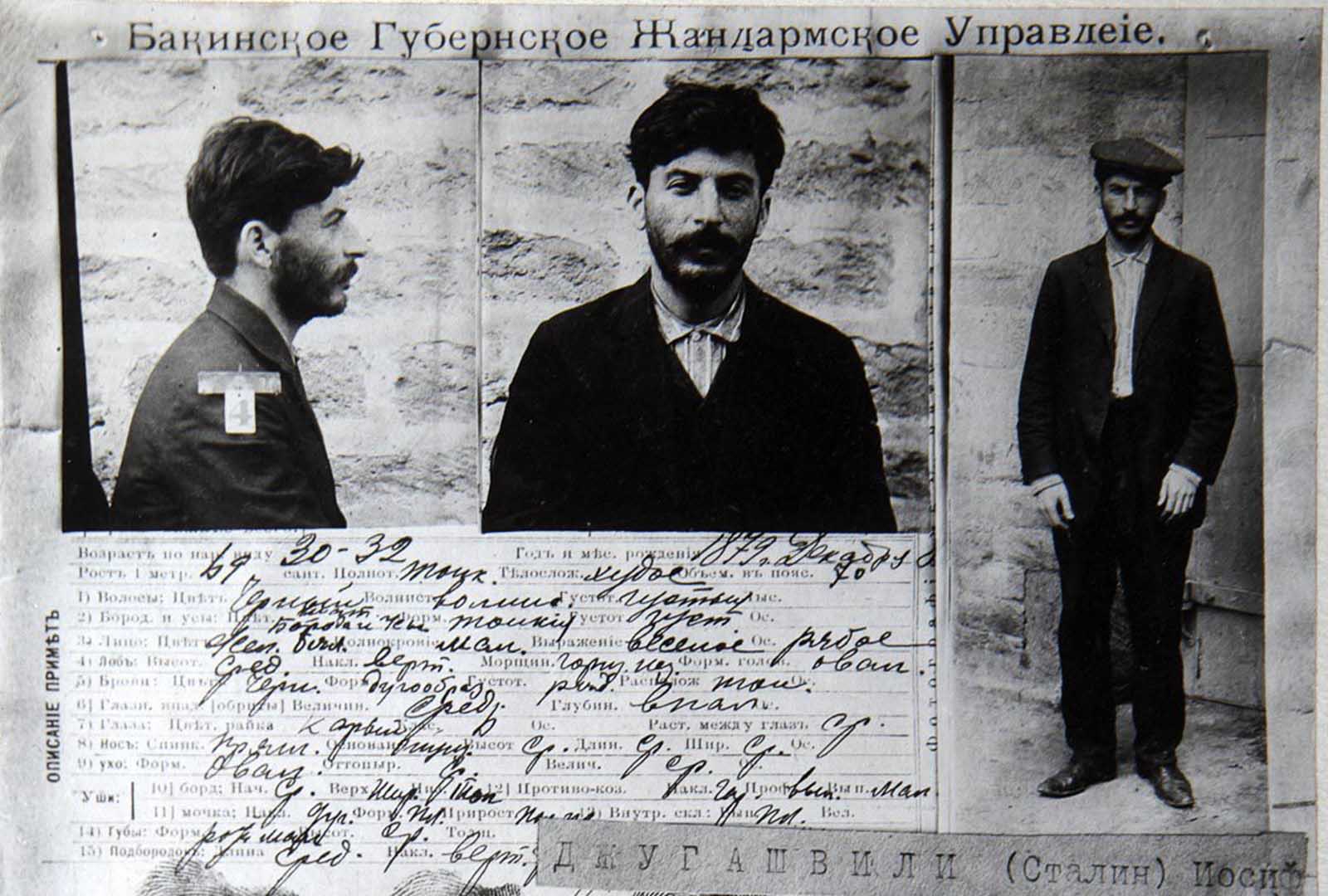 A criminal file on Stalin following his arrest in Baku, Azerbaijan. 1910. 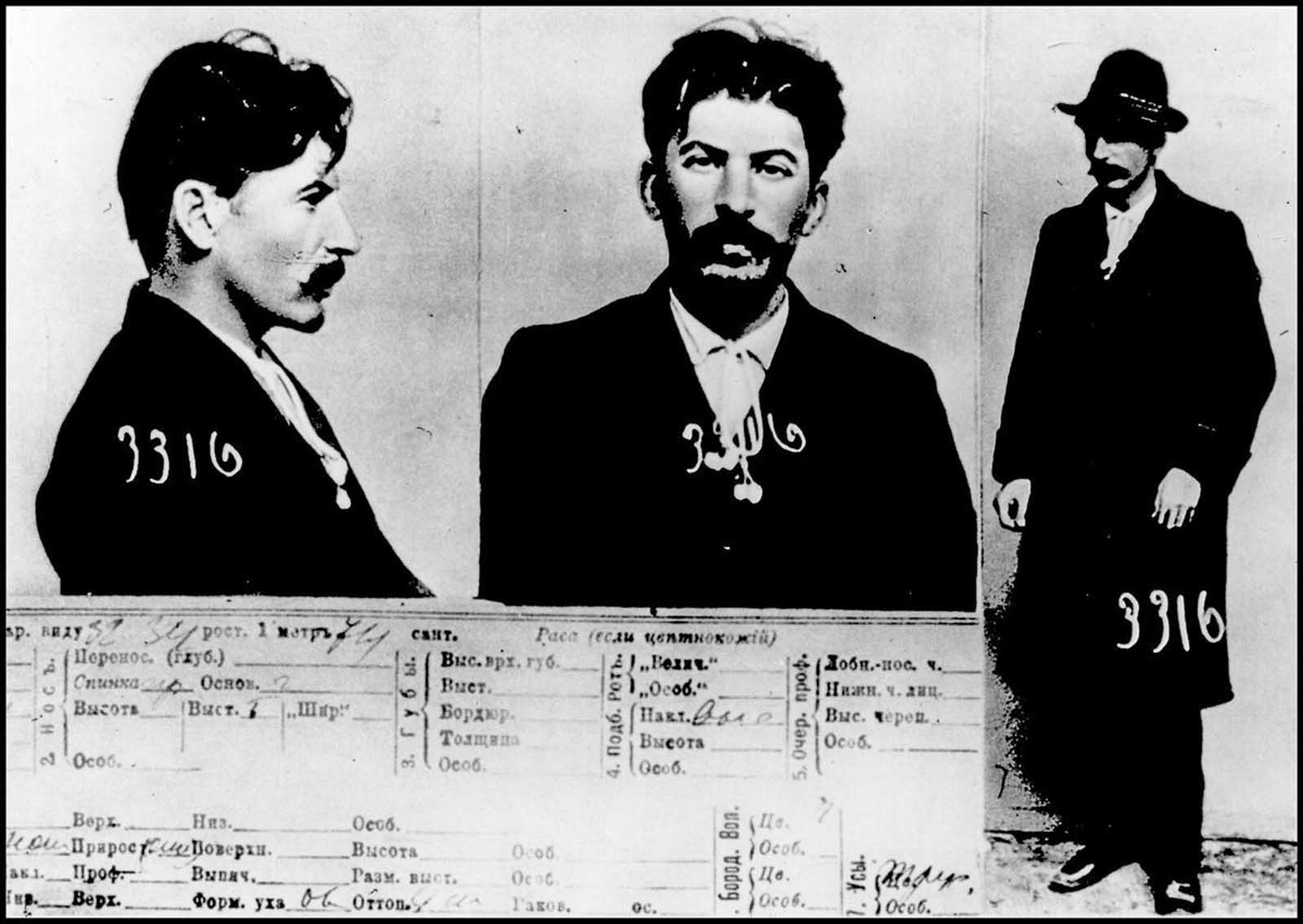 The information card on “I. V. Stalin”, from the files of the Imperial police in Saint Petersburg, 1911

All appear photo shopped to me, except maybe the 1911 mugshot.

If you look at these photos of very young and little older in what I perceive to be chronological order you can tell that Sexy Stalin actually looks nothing like Stalin, older or younger than. In all the photo's you can tell it's the same guy by the eyes and dark hair. Sexy Stalin's eyes are completely different and the hair is lighter. The facial shapes though are the same, and if you check out Stalin's left eyebrow, it traverses a little further to the center than the right eyebrow in all the photos. So it's both the same and not the same. Just like you would expect if an artist tampered with it to give Uncle Joe GQ good looks.

I also found this profile picture which matches Sexy Stalin.

Which led me to believe the pair Sexy Stalin and the above Profile picture are Mug Shots, or based on mug shots.

In conclusion I think the photograph is a Soviet artists creation and although it resembles Stalin, it's really a fugazi which rendered to depict Stalin as more attractive than he actually was.

So then I started looking at when the Soviet Union started modifying pictures for political reasons. It appears they started doing this after Lenin died as Stalin was consolidating power. A lot of those photographic editing for political reasons occurred during Stalin's purges. Especially the Great Purge 1936 to 1938. The Soviets would erase people out of photographs who had lost favor as the below photograph demonstrates.

Censorship of images in the Soviet Union
Censorship of images was widespread in the Soviet Union. Visual censorship was exploited in a political context, particularly during the political purges of Joseph Stalin, where the Soviet government attempted to erase some purged figures from Soviet history, and took measures which included altering images and destroying film. The USSR curtailed access to pornography, which was specifically prohibited by Soviet law.

An example of how the picture was altered again and again after each person fell out of favor with Joseph Stalin. 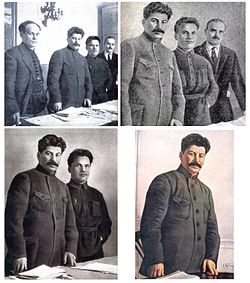 This image taken by the Moscow Canal was taken when Nikolai Yezhov was water commissar. After he fell from power, he was arrested, shot, and had his image removed by the censors.

Yezhov is clearly visible to Stalin's left. The photo was later altered by censors.

But they also altered images in other ways. Making Stalin appear more heroic, handsome, or involved by super imposing him next to Lenin. All these techniques were pursued.

So that's my answer. Sexy Stalin was probable retouched during the Great Purge 1936 to 1938. Although Stalin was trying to influence his place in history including his image since 1924 when Lenin Died.

Stalin earned a whitewashed backstory once he held power. As you note, this was a mugshot of a young man, so there would be no reason for the state or the subject to do this project off the bat. Unless as editor of Pravda (1912-1913, 1917) he sought to publish his own mugshot, the retouching probably happened during the Russian Civil War (1917-1922) when he was a top-ranking Bolshevik official and press censorship was in full swing.

An photo of the 1919 Communist Party Congress was retouched before half the people shown were executed; these edits happened before those men fell from grace: 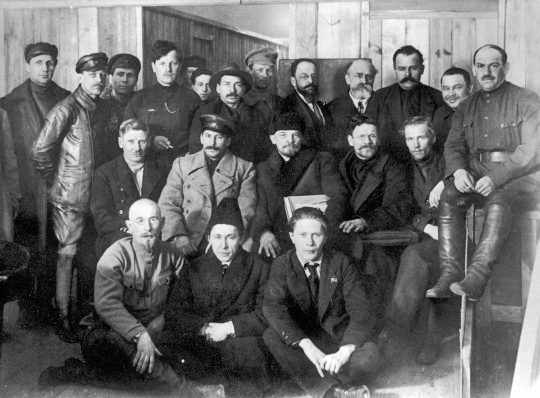 The goal of the alteration was controlling the accessible information about him. It wasn't cheap to accomplish. First, someone had to find the print or negative in local police files. The decision was taken to edit it for publication (and of course, suppress the original). Then the alteration took place, by a professional, because the state sought plausible deniability. Afterwards the only image officially available was the altered one. Since so many retouched Soviet photos do still exist in their original forms, maybe Sexy pockmarked Stalin is still out there too.

It was almost certainly altered after he came to power. Stalin was very self conscious about his smallpox scars. Presumably various artists were given the task of finding and/or retouching old photos of him to "correct" them.

As you're probably aware, altering photographs for political reasons was a high priority in the Soviet Union at the time, so it's not that strange that some artists were given this particular assignment.

Not the answer you're looking for? Browse other questions tagged soviet-union russia stalin photography or ask your own question.

11
Where does this hairstyle originate from?

7
When did commercial studio photography become common?
35
Did Stalin believe Israel would go communist?
14
Why did Stalin deem Quantum Mechanics 'counter-revolutionary'?
27
Why did Stalin keep the famine of 1932 a secret?
21
Why did Stalin push for the Great Purge against the Red Army in 1936?
6
Did Stalin give special treatment for his home country?
28
Why did Stalin and the Soviet leadership have Leon Trotsky assassinated?
3
Did Stalin have full control of the government in 1936?
2
Why did Stalin exile Trotsky instead of killing or imprisoning him?