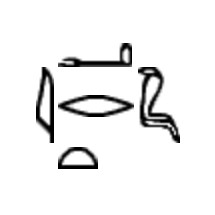 Does "jʿr.t (iaret)" mean "rearing cobra" as stated on Wikipedia?

The Uraeus (/jʊˈriːəs/; plural Uraei or Uraeuses; from the Greek οὐραῖος, ouraîos, "on its tail"; from Egyptian jʿr.t (iaret), "rearing cobra") is the stylized, upright form of an Egyptian cobra (asp, serpent, or snake), used as a symbol of sovereignty, royalty, deity and divine authority in ancient Egypt.

Or should it be understood as having the more generic meaning of "to ascend" as suggested by Wiktionary?

(Usage notes: Third-weak verbs can alternatively take the ending -yt to form the terminative, more frequently when passive than when active.

When this ending is attached to a verb ending in d or t, it is occasionally left unwritten.)

In short, yes that is one correct way to write the word for Uraeus. - when iart has the cobra determinative hieroglyph associated with it (as you have shown) it means Uraeus.

However, if written with other determinatives, it can have other meanings. For example, if it is associated with the determinative symbol for a building it can mean "house", or "abode" (of a deity usually)

When used to refer to the actual act of ascending, an additional determinative in the form of a pair of legs is often appended:

Wikipedia can be OK for looking up hieroglyphs, but it is limited by its very nature. There are some good Egyptian dictionaries available online. A concise dictionary of Middle Egyptian by Faulkner is probably among the best (but I'm not sure how legit the online copies are!).

A good (free) dictionary of Middle Egyptian by Paul Dickson has been made available on the Pyramid Texts Online website.

To answer the update, The Uraeus is actually a symbol representing the Ancient Egyptian goddess Wadjet (one of the earliest Egyptian deities, and often described as the 'protector' of Lower Egypt), who often was depicted as a cobra. The name therefore has the feminine -t ending. In this case, there is no masculine ending.

After the unification of Egypt, the Uraeus of Wadjet appeared alongside the vulture of Nekhbet (representing Upper Egypt) on the royal headdress to symbolise the unified kingdom.

As an aside, most people are familiar with the Egyptian god Amun, whose name imn means 'the hidden [male] one'. However, many do not realise that his origins lay in the Ogdoad of Hermopolis.

The gods of the Ogdoad were paired, and Amun was paired with the goddess Amunet, imn-t (note the feminine ending) whose name means 'the hidden [female] one'. In that example there are male and female versions of the name, distinguished by the -t for the feminine name.

The other male-female god-goddess pairs in the Ogdoad were:

126
How do historians and linguists know how to pronounce the names from non-phonetic scripts?