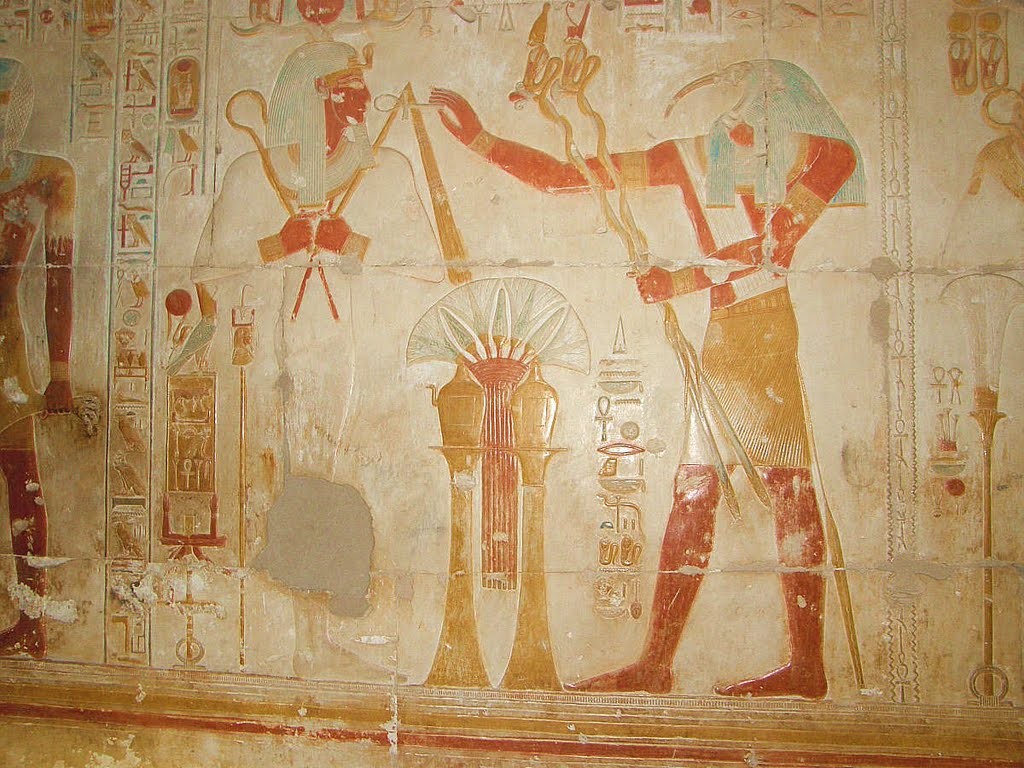 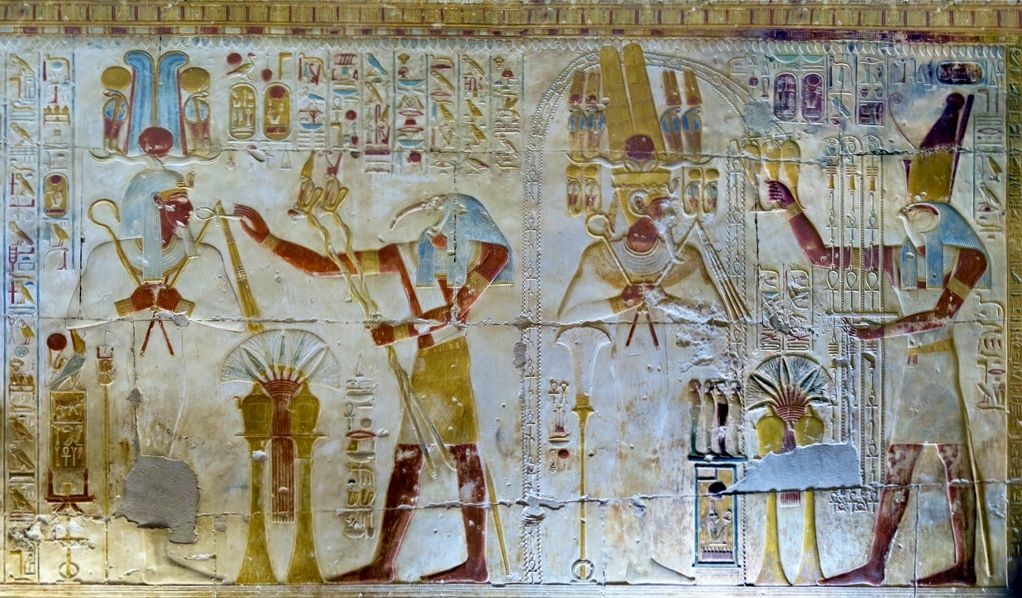 Please can someone help me understand this relief. I want to know:

I am very intrigued by the two Wadjet-papyrus staffs and what they symbolise. Are they only symbols of political power? Or do they have a deeper religious significance?

The image is the central section on the east wall of the Osiris chapel in the Temple of Seti I at Abydos.

There is a high resolution image of the drawing made by Amice Calverley, and published in the third volume of her description of the Temple of Seti I at Abydos, available from the Ancient Egypt Foundation.

The third volume of her description is also available on their website.

Seti I is shown on the left as Osiris (Egyptian wsir) and carries the usual symbols of authority - the crook and the flail. Perhaps the most interesting aspect of this image is the composite crown that SETI is wearing. This, together with the ram's horns, shows that the deceased King was being given the attributes of the god Amun-Ra in addition to those of Osiris.

Thoth is actually dressed as priest in this instance. He is standing before Seti and holding the Ankh or "Key of Life" to the nose of the deceased King, so giving him life in the afterlife.

In his other hand, Thoth is holding the lily and papyrus 'wands' of Upper and Lower Egypt (in this case, you can see the heads of the plants more clearly in the drawing than the photograph). Gods and goddesses are often portrayed carrying these, and they had a particluar significance in Egyptian 'magic'.

Around the wands are twined Uraeuses which in turn wear the Red Deshret crown of Lower Egypt and the white (actually painted yellow) Hedjet crown of Upper Egypt, once again symbolising the unified kingdom of Egypt.

The objects between Seti and Thoth appear to be Nemset libation vessels placed on stands and topped with lotus flowers. The Nemset was a kind of vase with a spout that was used to sprinkle water or other liquids during purification rites. These appear not infrequently in temple and tomb reliefs, and are often inscribed with hieroglyphic texts. There is certainly a border on the vessels here, but I can't make out any inscription inside it.

There are some particularly nice examples in the temple complex at Abydos that allow us to observe more detail.

For example, one in the Inner Osiris Hall of the temple of Seti I: 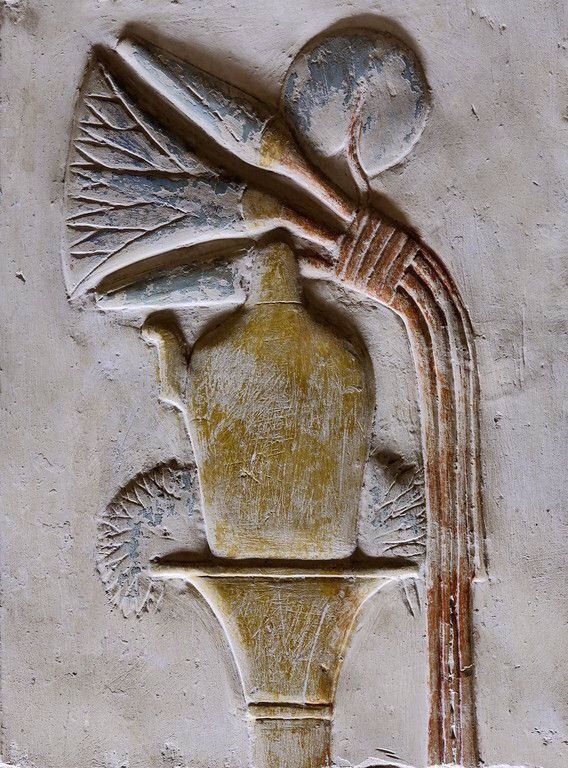 There are even reliefs showing Nemset vessels in use, as for example this relief in the second hypostyle hall: 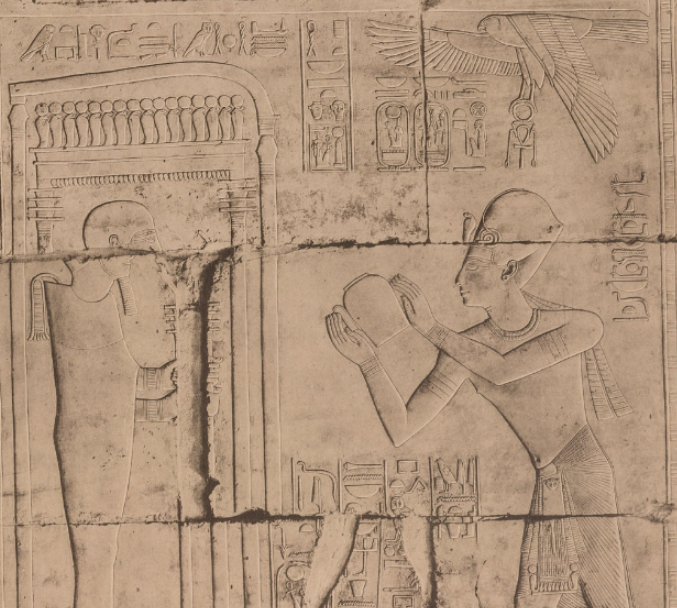 Even with the high resolution image, the detail of the hieroglyphs is difficult to make out on a mobile phone screen, so transliteration & translation is probably out of the question from me for now (not to mention the time involved).

I know that translations were published by Alan Gardiner (probably through the Egypt Exploration Society). They may also have been included in Breasted's Ancient Records of Egypt, and possibly even now be available online.

However, I did a quick Google search, and found that the hieroglyphs have been transcribed, transliterated and translated into French on the abydossethy.net website.

(A brief review of their site suggests that they have done this with most, if not all, of the surviving texts from the Temple of Seti at Abydos).

13
Does modern scholarship accept an Ethiopian or Nubian origin for Egyptian hieroglyphs?
87
How would a 16-year-old girl from Cleopatra's era curse?
1
Who were the Hermotybians and Calascirians mentioned as making up the warrior caste of Egypt by Herodotus
9
What were the Ethiopians doing in Xerxes' army?
16
How exactly were beer/bread made in Ancient Egypt?
11
Did ordinary people during Hatshepsut's reign know she was a woman?