Did the Red Army and German Army clash in Poland in 1939?

I found a youtube lecture by Stephen Kotkin. He is a professor of history, wrote 2 books on Stalin with a 3rd on the way, and has access to certain Russian archives. That's all I know about him, credential-wise.

At 33 minutes in, he says basically the following: The Germans crossed the line (the agreed-to line dividing Poland between Germany and USSR in the Molotov-Ribbentropt Pact) and were holding territory allocated to the Soviets, the Soviet and Germans talked about this, then Stalin decided to retake the territory by force, and did so. (Later he says the territory was the Galician Oil Fields.)

Is this true? Did the Red Army and German Army really clash in Poland at this time, with casualties on both sides? If so, what is the battle called and where can I read more about it? I couldn't find it on wikipedia or even google.

Providing English translations and expanding upon the answer by @James Slides referencing the brief exchanges of fire between forces from the German 1st Mountain Division and elements of the Soviet Volotchitsky Army Group near Lviv in 1939.

Two armored vehicles sent from Lviv eastward along another road towards the Soviet troops marching towards the city were suddenly subjected to shelling. The commanders thought it was Polish troops and entered the battle, firing from 45-mm cannons and machine guns. As it turned out later, the crews of the armored communications delegates knocked out two anti-tank guns and killed one German officer and four soldiers. Two Soviet armored vehicles with their glorious crews fought to the last covered in fire and burned. This was learned from the representatives from the headquarters of the 1st German Mountain Infantry Division and the 137th German Regiment.

At 8.30. Lviv. The Germans unexpectedly launched an attack on the western and southern outskirts of the city. Polish troops took the battle, and Soviet tanks and armored vehicles of the 24th LTBR reconnaissance battalion were between the warring parties. The brigade commander Colonel Fotchenkov sent an armored vehicle with the white flag to the Germans. Soviet commanders in tanks and armored vehicles gave signals in red and white flags, but the fire on them from both sides did not stop. Having exhausted peaceful methods of ceasefire, Soviet tankmen opened fire on the enemy. At the same time, 3 anti-tank guns were killed [of] the Germans, 3 officers were killed (two of them were major), and 9 soldiers were wounded. In the 24th brigade, 2 armored vehicles and 1 tank were killed, 3 people were killed and 4 people were injured. Seeing their losses, the Germans stopped artillery fire.

The above is an English translation from Russian language Wikipedia 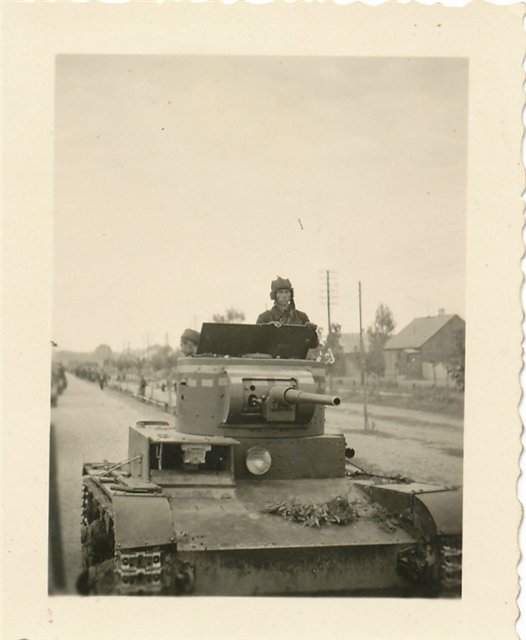 "Then, on the morning of September 17, the 24th tank brigade of Colonel P.S. Fotchenkov, which included a tank reconnaissance battalion under my command, along with other parts of the Kiev Special Military District crossed the border in the Ternopil direction. The battalion operated in the advance detachment. By the evening of the same day we reached Ternopil, and on the night of September 19 entered Lviv. The population greeted the Red Army with glee. Our mood was elated: after all, we carried out a fair liberation mission. Our forward detachment continued to advance rapidly toward the demarcation line. Suddenly, we saw German tanks rushing towards Lviv, infantry and artillery. It alerted. After all, the demarcation line established in advance passed much to the west. The Germans could not have been unaware that the Polish army of General Langer, which had been defending Lviv from the west, had laid down their arms. Nevertheless, the Germans were clearly in a hurry to break into the city, apparently hoping to get ahead of our main forces. What to do? Give way and let them go to Lviv? Not. We must block the way! At my command, the battalion turned around. We made it clear to the Germans that they should not move to the territory occupied by the Soviet troops, but they opened fire on our tanks. And again the question: how to respond to a clear provocation? I made a decision - to open fire. Having taken an advantageous position, the tankers of the battalion fired several salvos from cannons. Our fire turned out to be quite accurate: several German guns, put forward for direct fire, were silent, several soldiers and officers were killed and wounded. Not without losses and with us. Political instructor Vasily Poznyakov died, two armored vehicles burned down. The next day, the Germans apologized and regretted the clash. They tried to explain everything with what the Soviet troops mistook for the Polish defending Lviv. We had to listen and accept these apologies. However, we felt in our hearts - it was very important for the Nazis to conduct reconnaissance of our strength, to test the ability to resist. Well, the first test could not reassure them ... In those days, we had several so-called friendly meetings. First, about 20 German officers arrived at our place. The brigade commander Colonel Fotchenkov received them on the outskirts of Lviv - in Vinniki. This meeting was attended by many commanders and political workers of our brigade. I also happened to be there. We accepted the guests according to all the rules. They led them to the location of the unit, showed military equipment. The guests smiled and complimented us. But their excessive curiosity irritated and alarmed us. They were especially interested in tanks. They looked around from the outside, looked into the hatches, the towers, tried to learn as much as possible about the armor, weapons, about all the tactical and technical data of our machines."

From the memoirs of the chief of staff and then the commander (in 1941) of the 63rd Tank Regiment of the 32nd Tank Division A. V. Egorova. (Sourced from LiveJournal.) 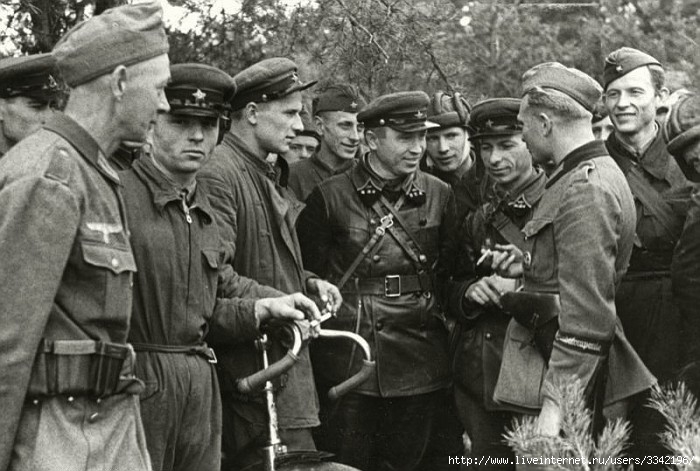 This does not appear to be true. There's no mention of it in Weinberg's A World at Arms, which is about the best one-volume history of WWII. The German multi-volume history Germany and the Second World War covers this period in volume 2, Germany's Initial Conquests in Europe, pages 118-126. Warlimont's memoirs, Inside Hitler's Headquarters 1939-45, have further details. While Warlimont is often self-serving, he doesn't portray himself in a good light here, and so his account is worth considering.

The German High Command, OKW, did not expect the Soviet invasion of eastern Poland at the time it happened, according to Warlimont. While they knew of the treaty of 23rd August, they were not aware of the secret annex that provided for the division of Poland. The invasion came as a surprise, and orders were got out as fast as possible (which wasn't very quickly) since the potential for clashes was obvious. The Soviet Military Attaché in Berlin was briefed by Warlimont on 17th September on the progress of the German invasion. Since Warlimont hadn't been told about the boundary by then, he stressed the German claim to the oil area in that briefing and thought he was going to be fired once Stalin telephoned Ribbentrop to complain.

Should OKW have anticipated the Soviet invasion? The Poles had defeated the proto-USSR in 1919-21, the Soviets seemed to be pre-occupied with their conflict with Japan, and the Germans had a low opinion of Soviet capabilities in general. The Germans advanced beyond the agreed boundary line because the Wehrmacht didn't know about it. Even if they had known, they would likely have crossed it so as to be able to defeat the Poles, rather than giving them a safe area to rally in.

Once the Soviets attacked, OKW laid down a maximum limit to the German advance on 17th September and required units beyond that line to pull back. Subsequent lines were laid down every day from 18th to 21st September, pulling German forces back to the "four rivers" boundary line that had been agreed on 23rd August, backed up by orders from Hitler. The intention was to keep German and Soviet troops apart, and to give the Germans time to move back wounded, prisoners, and their own and captured material. Another reason for doing it in stages was to avoid giving various undefeated Polish forces time and space to regroup.

The Germans hoped to revise the agreed boundary, and there were various changes, but the Polish oil fields had always been on the Soviet side of the line, and stayed there. There was no fighting involved in the Red Army taking them over, according to all of these sources. The withdrawal from Brest-Litovsk was amicably negotiated by German and Soviet commanders on the scene, and there was a joint parade before the Germans left.

In the Polish book published in 2005 "Kampania polska 1939 roku: początek II wojny światowej" Czesław Grzelak, Henryk Stańczyk on page 274 and 275 we can find:

Soviet-German competition for capturing the city (*) resulted in a confrontation of armies of both agressors. Before the noon of 19th of September the Gebirgsjäger-Regiment 137 2nd Mountain Division, when marching to - already captured by Soviet tanks city Winnik - they encounter those troops. A firefight developed with the result: Germans lost 3 AT guns, 5 KIA and 9 WIA; Soviets lost 1 tank, 2 panzer cars, 6 KIA and 4 WIA. That clash (besides apologies from Germans) seems not to be completely random. It may have been a test of strength of both sides [...]

[...] on the 23th of September near Widomla German tanks shooted at Soviet patrol from 310th Rifle Regiment of 8th Rifle Division. Casualties of Red Army was 2 KIA and 2 WIA. Apologies from German side was accepted from the Soviet side.

(translation is mine, sorry for not being gramatically correct)

There's a mention about clashes near Lviv by Volotchitsky army group and Germans.

Unfortunately, my sources are only in Russian: Wikipedia and LJ

Soviet and German armies had strict orders to avoid any fighting each other, and they did not fight each other. However partition of Poland in 1939 treaty was secret. After the fighting stopped, small adjustments had to be made to put the actual position of the troops into correspondence with the agreement. In Brest there was a joint military parade of the Soviets and Germans, before the Germans left it to the Soviets.

Polish troops did not have orders to engage the Soviet troops. Of course this did not exclude some small scale fighting, in the conditions of general disorder. The Soviets disarmed Polish troops, deported their officers to prison camps and later murdered many of them. (Katyn massacre is the best known one, but there were several more on the same scale, in particular in Kharkiv).

Generally, the Ribbentrop-Molotov treaty signed shortly before Blitzkrieg (01 September 1939) thwarted any direct military conflict between Nazi Germany and the Soviets. No clashes, just the soldiers and generals meeting to hand over some superfluous spoils.

Not the answer you're looking for? Browse other questions tagged world-war-two nazi-germany soviet-union poland or ask your own question.

20
Did the poor performance of the Red Army in the Winter War significantly contribute to German underestimation of the USSR's military capacity?
17
Have Germany and Poland ever signed a peace treaty after WWII?
10
How did communist authorities decide who is “German” and who is “Polish” when expelling Germans from recovered territories?
14
Cryptography used by Red Army in Polish-Bolshevik war
8
Did the Soviet Union hand over thousands of Jews to the Nazis in the spirit of the Molotov–Ribbentrop Pact?
0
How did Red Army achieve to manipulate German Army in 1942 and 1943?
5
Was the 1939 Red Army more disciplined / better behaved than the 1943-1945 Red Army?