The Ortega family at Rancho Refugio did a brisk business in clandestine trade with visiting ships.

According to Katherine Plummer, in March of 1815, the Forester stopped there and loaded firewood, salted beef, and 11 hogs. That's too much pork to serve at once so perhaps the pigs were salted or caged.

According to Antipatr Baranov's journal, in September (O.S.) of the same year the Russian-American Company's Ilmena came by and "bought one cow for ship's provisions". I presume it was slaughtered immediately. At another rendezvous six days later, Mr. Ortega "brought some cattle for provisions"; the ship needed "no more than six bulls". The transaction never happened because the landing party was arrested.

The Ilmena was a 200-ton brig with a crew of 25. One cow a week for provisions seems reasonable. I wondered if the translation was accurate and checked the original; indeed the word was Быков, bulls. I'm not sure if that word can describe breeding pairs. What was the crew going to do with six bulls?

First, to get an idea of what a ship might be provisioned with, here's the meat the British Sloop Alert in 1777 carried with her for 60 men.

Those numbers cut down to 42% for a crew of 25 means 940 lbs of beef and 736 lbs of pork. Another way to look at it is each man was allotted roughly a pound of meat a day. So 25 men would go through 25 lbs of meat per day. Possibly more for the officers. And those are numbers for the Royal Navy, so possibly yet more for a commercial ship. Let's say 30 lbs of meat per day for the ship. Those 1676 lbs of meat would last about 50-60 days. Seems reasonable.

How much meat is there in six 19th century bulls? Considerably less than there are in six 21st century bulls. For example, according to the USDA the dressed weight of a bull went from ~700 lbs in 1962 to ~900 lbs in 2018. More weight will be lost in processing, though some weight will come back due to 19th century sensibilities being more willing to accept fat, offal, and organs.

You can probably expect that about 50% of the weight of the bull is edible which means those 1676 lbs of meat for 50 to 60 days is now 3352 lbs of live animal. Split between six bulls that's about 560 lbs each which seems reasonable for a 19th century bull. Historical data on cattle weights would improve this guesstimate.

As a supplement to Schwern's answer, from Janet MacDonald's book on provisioning ships during the Napoleonic period

What is noticiable when studying these log reports of killing cattle is the great disparity in weights, beasts producing anything between 140 and 675 pounds of meat. This was not a random thing, but more or less related to where they came from.

So for 6 cattle this could mean anything from 840 to 4050 lbs of meat. If we assume a ration of a pound of meat a day, that would give a potential range of 33-162 days of meat from 6 animals depending upon their size and the skill of those extracting the available meat.

To what extent they had experienced butchers on board is not known but at the time when many beasts were killed on the farm it would not have been difficult to find a crew member who knew what to do...How much of the offal was used would also depend on whether anyone knew how to deal with it, and, perhaps, weather conditions; cleaning out intestines to make sausage skins without damaging them would not have been easy in a rough sea.

As an additional bit of background information, analysis of the diets of these sailors gives an average daily intake of nearly 5,000 calories (compared to the modern recommended intake of about 2,500 calories). So they were consuming similar amounts of energy to a professional athlete. This isn't too surprising considering that everything on a sailing ship was man-powered.

The journal translation I used in the question was commissioned by an independent historian. I wrote to her and she offered me a copy. It says that the cattle on both days were for "provisions". I decided to check this assumption against the original.

I was able to find the transcription from which the translation was made, in a book called Россия и Калифорния. In the first case the cow was indeed for ship's provisions (для судовой провизии). In the second, though, the cattle were for salting (для соления). Wow!

I guess the ship already had the salt on hand. I found that a bit surprising. 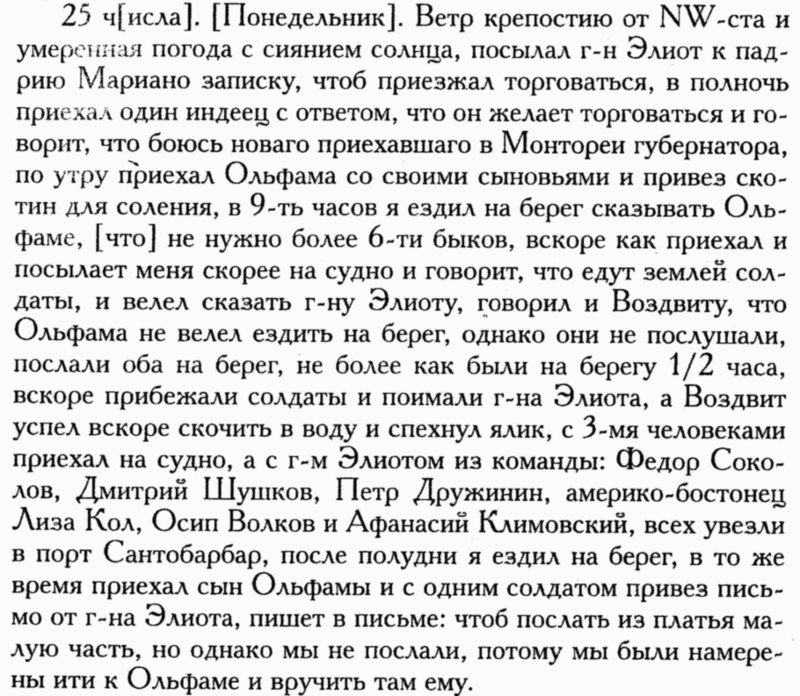 Not the answer you're looking for? Browse other questions tagged trade food age-of-sail animals or ask your own question.

6
How was a line looped under a sailing vessel for keelhauling?
6
Did civilian cold war bunkers plan for inclusion of family pets?
4
What type of provisions would seafarers use in the mid 19th century?
2
What were whale brains used for?
3
What was the reason for the ubiquitous pigeon farms in Soviet cities?
5
Medieval symbol for money/trade/banking
14
Was there a way for ships to disengage from boarding actions?