This question was prompted by a particular statement by user Pieter Geerkens in the discussion about the deaths due to famine during the Great Depression found here. My understanding of the Great Depression was that it was at it's worst at the start, and actions like the New Deal led to recovery, but in this chart: 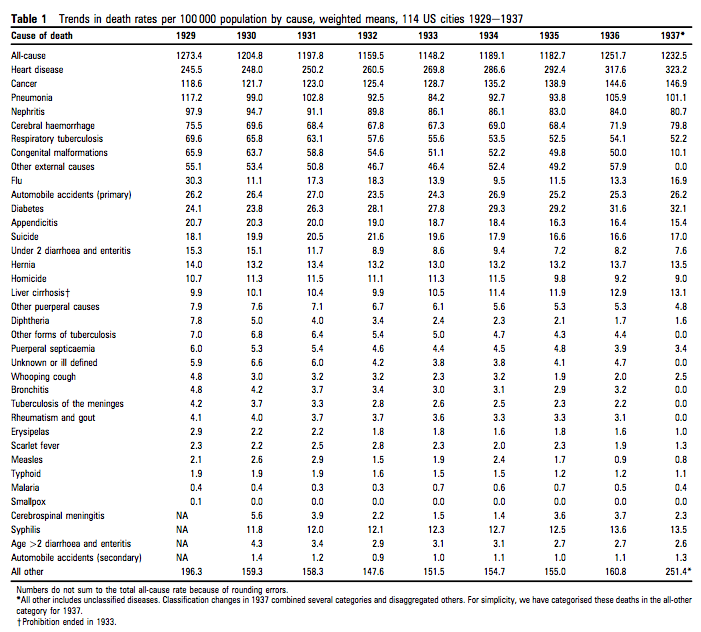 There's a clear, and fairly substantial increase in the rate of deaths in 1934, and then again in 1936. The conclusion of the other discussion seemed to be that the Great Depression did not lead to an increase in deaths from starvation, but at the same time as some medical advances appear to be reducing the deaths from certain diseases, deaths from illnesses you can attribute to 'weakness' and therefore malnutrition such as Heart disease and Pneumonia sharply increase, and actually continue to increase substantially for the remainder of the 1930s.

Wouldn't these deaths be consistent with both the short term, and long term effects of malnutrition? Particularly among children whose development was stunted by calorie deficiencies?

united-states great-depression famine
Share
Improve this question
asked May 27, 2018 at 12:17

First, if you look closely at the numbers, you see a big rise in the death rate from heart disease and a smaller rise in the death rate from cancer during that period. It's not obvious that either would be much affected by malnutrition. (If anything, given how heart disease is driven by obeasity, the opposite may be true.) If you subtract those deaths out, the remainder (which ought to contain all the famine-related deaths) drops throughout the period. I wonder if we're not seeing the effects of the significant increase in smoking in the early decade of the century?

Secondly, to draw any valid conclusion, the numbers must be scaled by population which was increasing all through this time. (Otherwise, an increase in deaths could simply be due to more people being around.)

It's pretty clear that these numbers by themselves do not support the idea that there was a rise in famine-induced deaths in the US in the 30s.

Not the answer you're looking for? Browse other questions tagged united-states great-depression famine or ask your own question.

37
How many people in the US starved to death during the Great Depression?

13
Did anyone warn about the potential for stock market crashes in 1929, and if so why were their warnings ignored?
6
When did the U.S. Postal Service completely transition from horse-drawn to motorized transport?
5
Why did the United States issue the Monroe Doctrine when it did?
5
Why did Franklin D. Roosevelt confiscate gold from the American people during the Great Depression?
3
Did alcohol consumption increase in the U.S. after 1933?
1
How did they number the months when the year started on March 25th?
37
Why did the population of Anchorage, Alaska, increase by so much in the 1970s?
64
Why did stock brokers go bankrupt after the crash of 1929?
47
Did the leaflets from the US to Hiroshima/Nagasaki civilians on bombing cities reduce the civilian casualties of the two nuclear bombs in August 1945?