What is a “barso”? (ref. Richard Cocks' diaries)

In his diaries documenting his time in Japan, Richard Cocks mentions barsos frequently, apparently meaning some kind of liquid containing vessel (mostly in reference to [gifts of] alcohol, but occasionally vinagre and other liquids). This word unusually is not included in the footnotes explaining almost every foreign term that he uses (mostly Japanese, with a few Portuguese and Spanish).

Does anyone know the etymology of this word?

October 28.—Goresanos wife brought her doughter of 20 daies ould to the English howse, with a present of a barsoe of wyne, figges, and oringes, desiring a name to be given her, which was per consent Elizabeth. 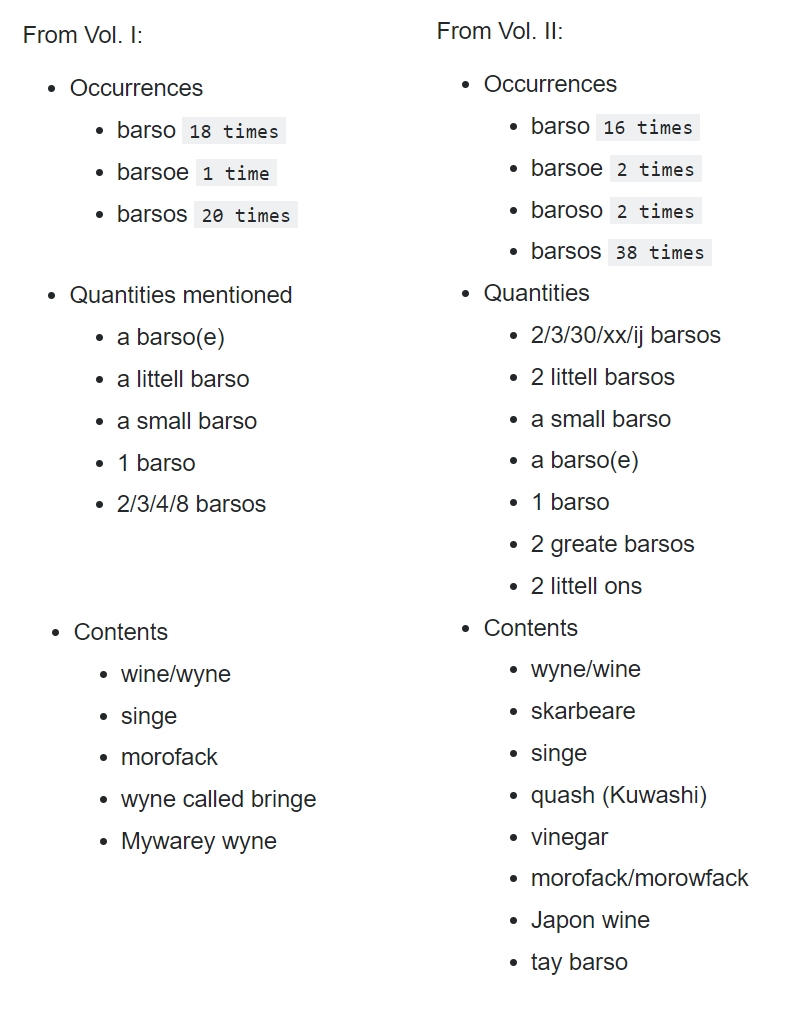 The meaning of "barso" is clearer than its origin. Samuli Kaislaniemi analyzed it in his PhD thesis Reconstructing Merchant Multilingualism : Lexical Studies of Early English East India Company Correspondence, p. 256:

RC uses barso in the sense 'little barrel' (cf. Farrington 1991:805). Etymology uncertain; does not appear in PD It., Pt., or Sp. (cf. barrillo, barrilejo); the phonology is not Japanese. Possibly a pseudo-Romance word arising from playful use of language?

This rare word does not appear at all in Merchants of Innovation: The Languages of Traders. Perhaps Cocks invented it.

My immediate assumption was that it was an anglicisation of Spanish vaso (pronounced /'baso/), meaning 'cup/glass/drinking vessel', since he also anglicises Spanish recado (message) as recardo:

“Copendale at Miaco not very well, and that he bringeth recardo from themperour to set Damian and Jno. de Lievana free.”

Further evidence that it may be Spanish in origin is that he similarly excludes the Spanish word barica/barrico from his section “Some Japanese and other foreign words and terms”, presumably because he assumed such words would be intelligible to his audience.

Not the answer you're looking for? Browse other questions tagged naval terminology etymology medieval-japan or ask your own question.

9
What Was “Courtly Love” (Amour Courtois?)
4
What lands have been called by names chosen to disassociate those lands from its inhabitants
5
What is a knight of the windmill?
5
What killed Takeda Shingen?
2
Location of Hagemeister's six-language diaries