What is Washington holding in the painting "Scene at the Signing of the Constitution of the United States"?

Here is Howard Chandler Christy's 1944 depiction of the Signing of the Constitution of the United States. 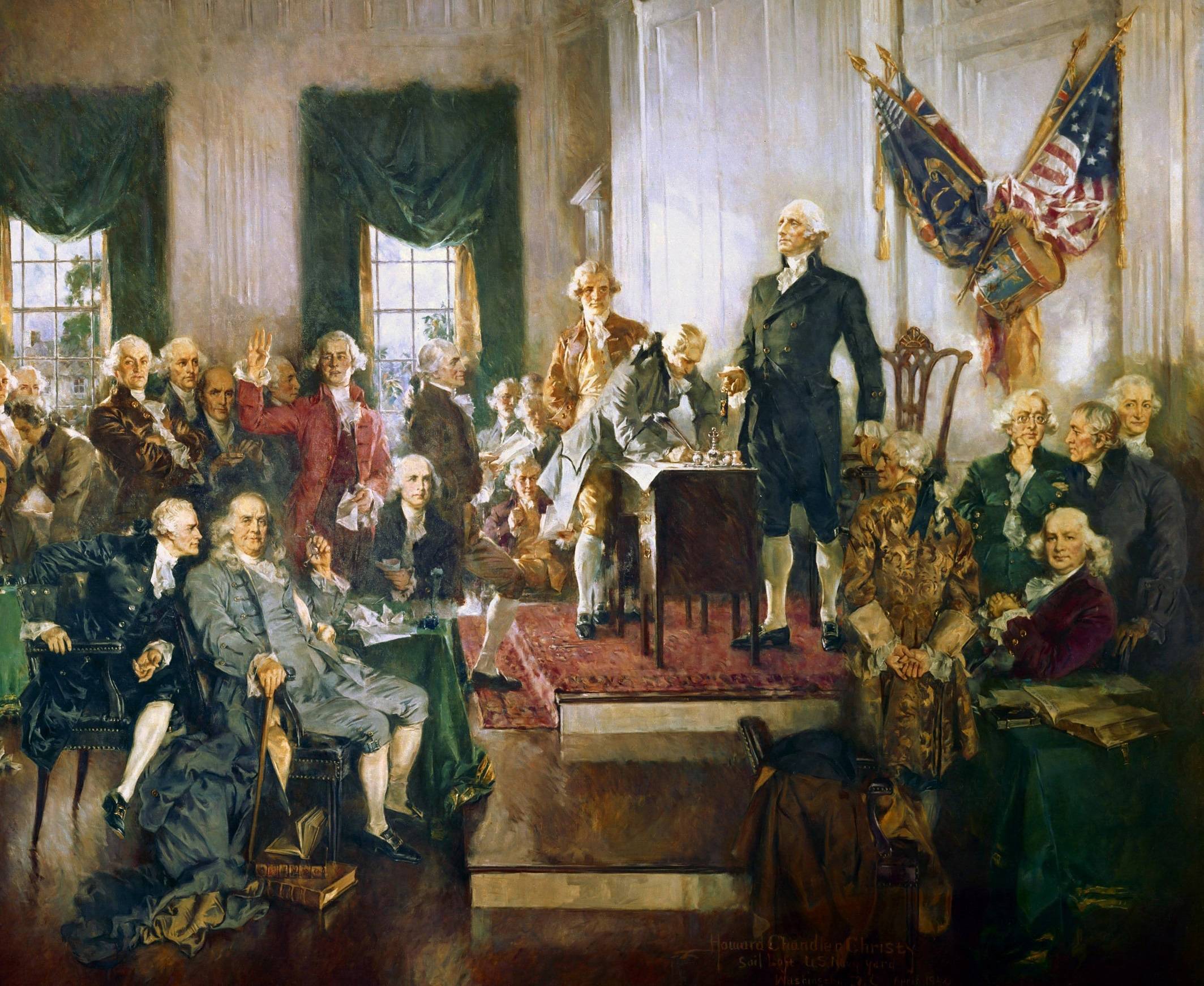 You can see clearly Richard Spaight of North Carolina signing the constitution.

I'm just curious, what is George Washington holding in his right hand?

It looks like a pocket watch with elegant fob (matching his suit!) to me. 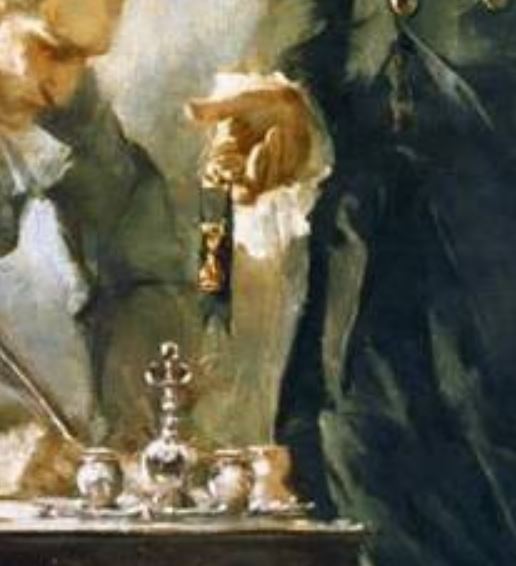 The resolution of the painting is insufficient to determine if this fob incorporates the same gold fob seal depicted here, or perhaps is one of the others Washington was known to own.

The fob also bears resemblance to modern masonic jewelry awarded, by lodges and grand lodges, for meritorious service and accomplishments.

Washington's watch (from this collection at least) seems to have been somewhat simpler than the one illustrated - but that might be artistic license. 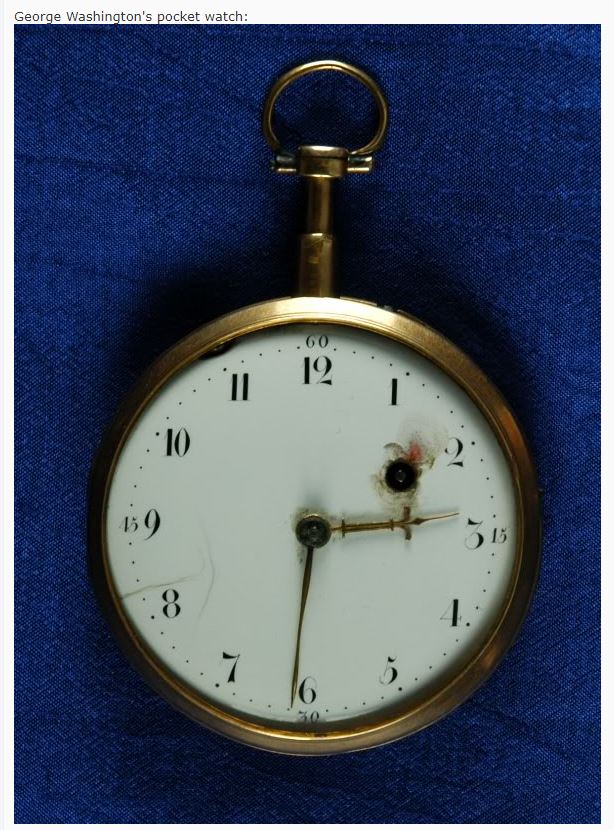 I agree with Pieter Geerkens and would like to contribute to Pieter's answer. Washington as a person was obsessed with timeliness. Washington owned several pocket watches and often would walk down to his watchmakers shop in Philadelphia and reset his pocket watch from a source time piece to ensure accuracy and punctualness. It thus must have been hard for Washington to preside over the Constitutional Convention and try to build a political consensus, such an inefficient process for a man such as Washington with his military background.

Perhaps the timepiece in his hand in the painting is reference to the timeliness of the convention. Washington, Madison along with Hamilton had engineered the Constitutional Convention. Washington while an organizer, even originator; worked behind the scenes. Washington had conserved his political capital for years, and planned to use it during this Constitutional Convention. Washington had remained publicly silent during the failed Articles of Confederation debate and fiasco implementation. Washington was publicly silent when Congress could not get their act together to pay his soldiers and officers for their service during the revolutionary war. Washington always a pragmatist figured his personal prestige gained during the War was good for 1 big political push. Now the country was on the verge of collapse. There had been two rebellions: Philadelphia Mutiny (1783), ongoing Shay's Rebellion (1787) and the country was in default on it's debts. Washington desired a new stronger Constitution which would allow a federated system with a stronger central government capable of looking after the combined interests of the states.

To this end Washington agreed to lead the Convention, personally invited the delegates to the convention, remained silent during the debates, and intervened privately behind the scenes to aid ratification while still appearing neutral. Time though would have been a constant irritant especially to Washington who was such a punctual man.

The convention began May 14, 1787 with only the Delegation of Virginia (including Washington and Madison who engineered the entire Convention) and Pennsylvania (who were local). It took 11 more days May 25th until the Convention had a quorum in attendance ( representatives from 7 states). 19 of the 74 invited delegates to the convention never showed up at all, including all of the delegates from Rhode Island which boycotted the convention. Of the 55 delegates who did show up, only a little more than half, 30 stayed until the end of the convention.

New Hampshire's delegation showed up 2 months late, at which time two of the three New York Delegation had left. So New York didn't have a quorum.
Washington quipped, the Constitution was signed by “11 states and Colonel Hamilton.”

So Washington looking down at his pocket watch is probable representative of his time investested and squandered during the successful convention. His time spent debating and organizing the new striation of the United States with Madison, and the 4 month of his time spent in Philadelphia to herd the colonial cats and ultimately sucessfully come away with a new Constitution for the United States.

Not the answer you're looking for? Browse other questions tagged united-states art or ask your own question.

12
How tall was George Washington?
6
A counterpoint/corrections list to "A Peoples' History of the United States"
2
Was there a time when George Washington discovered some of his soldiers absolutely refused to swear loyalty and obedience to the Continental Congress?
0
What flags are on display in “Scene at the Signing of the Constitution of the United States”?
17
Why was Reagan sworn in twice for his second term?
1
Why did Al Smith win six "Dixiecrat" states, and very little else?
6
How far did Malcolm X get with taking the United States to the United Nations?