Where were ancient Romans supposed to dispose of their waste and garbage?

On page 35 of Gregory Aldrete's Daily Life in the Roman City he states "The majority of sewage that found its way into the system did not come directly from latrines [...] Most waste was dumped in the streets, and from there might find its way into the sewers." But just a few pages later, on streets, he writes "... property owners were at least in theory supposed to look after the section of the street that abutted their property. One text states that 'each person is to keep the public street outside his own house in repair [...] they are not to throw excrement, dead animals, or skins into the street.'"

It sounds as if this law was wildly ineffective. But what surprised me about it was that I'd assumed dumping waste into the streets (presumably to be cleared away by fountains or the next rain storm) was an accepted norm. And yet clearly there was some pushback. So if not the streets, where? Did the Roman government want everyone to visit public latrines? Where did they want them to dispose of their other garbage?

In short, if dumping waste in the street was prohibited, what was the contemporary alternative?

The short answer is that, although there were laws concerning the disposal of waste,

there is no evidence of widespread municipal waste management in the modern sense of the word; there were only individual efforts at dealing with waste.

There were, however, efforts by the authorities in some areas to deal with the problem and there is also evidence of recycling. Mostly, though, it seems Romans were expected to use dumpsites on the edges of cities but, in the absence of proper enforcement, many just threw trash on the streets, in the sewers or in pits their own homes.

When it comes to waste disposal, ancient Rome was, in some ways at least, not much different from modern cities in that rich areas tended to have better services and to have at least some rules / laws more strictly adhered to than in poor areas.

A lot of trash was thrown into sewers which, over time, meant that emperors had to order rivers dredged due to the accumulated garbage. In poorer areas, another method of waste disposal was just dumping it into the streets:

In Rome and other cities in the empire, the approach to waste management was quite lax….Waste of probably all kinds was thrown out of windows and onto the street, particularly at night. The satirist Juvenalis warns his readers about this phenomenon:

…it’s a long way up to the rooftops, and a falling tile can brain you. Think of all those cracked or leaky vessels tossed out of windows—the way they smash, their weight, the damage they do to the sidewalk! You’ll be thought most improvident, a catastrophe-happy fool, if you don’t make your will before venturing out to dinner. Each open upper casement along your route at night may prove a death-trap: so pray and hope (poor you!) that the local housewives drop nothing worse on your head than a pailful of slops.

As jamesqf noted in his comment, Rome "did have a good underground sewer system" (see Cloaca Maxima) but few houses or even public latrines were directly connected to it, probably due to the cost of digging up streets for underground pipes. Also,

Three other compelling reasons that may have deterred private homeowners from having a drain that connected to the main sewer were flooding, odor and vermin. Almost every year the Tiber River flooded and when this occurred the Cloaca Maxima became backfilled with water, clogging the drain with the wastes it had dumped into the river.

Source: Craig Taylor, 'The Disposal of Human Waste: A comparison between Ancient Rome and Medieval London'

One common solution was the use of chamber pots. These were then emptied in a vat placed under the well of the staircase. If tenement owners did not allow these vats to be placed in their building the tenant could empty their human waste into the nearest dungheap located in an alley, into the public latrines or into the gutters that ran down the sides of the street.

Another alternative was to load human excrement into wagons, which passed through the streets during the day while other wheeled traffic was not allowed to be in the city. Those responsible for this duty were called stercorarii and they would take these cartloads of human waste and sell it to farmers as fertilizer.

For common people there was no house-to-house garbage collection. People continued to dump their rubbish into the street, and the rubbish at times became so thick that stepping-stones were needed. Street levels were to rise as new buildings would be constructed on top of trash... 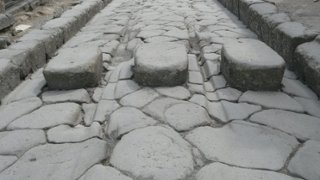 Pompeii street: Stepping stones were placed in the streets because sewage flowed through

…excavations have shown garbage piled up all along the interior of the city walls, in streets and alleys outside homes, and even on the floors of their own homes.

I excavated a room in a house where the cistern (for storing drinking water and water for washing) was placed between two waste pits. Both waste pits were found completely packed with trash in the form of broken household pottery, animal bones and other food waste, like grape seeds and olive pits. 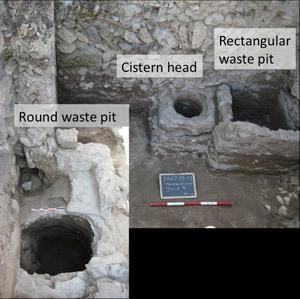 Source: 'The bizarre story of where ancient Pompeii put its trash'

In short, as Theodore Peña of the University of California, Berkeley, observes, Pompeians

basically didn’t take out the garbage.

Nonetheless, there were laws against just dumping trash on the streets and, in Rome at least, there were dumpsites:

These bad habits were tackled through bans and orders, as well as by applying concrete technical measures. Concerning throwing rubbish from windows, the main thing was to prevent pedestrians from being injured. The perpetrator or the building owner could be hit with a fine…Private building owners were required to keep the section of street in front of their buildings clean. If they did not do so, they had to pay for it to be cleaned at their own expense...

Solid waste was most likely taken outside of the town. Although during daytime hours transportation was restricted in the cities, records of exceptions for waste wagons exist (plostra ... stercoris exportandei causa) (Thüry, 2001: 5-7). There is, however, no record of a public, organized waste removal service.

One major excavated dumpsite is Monte Testaccio, two kilometres from the forum:

This artificial hill, the largest preserved waste heap from Classical times, is the result of a specific waste management practice. The entire mound consists almost entirely of broken amphorae imported to Rome 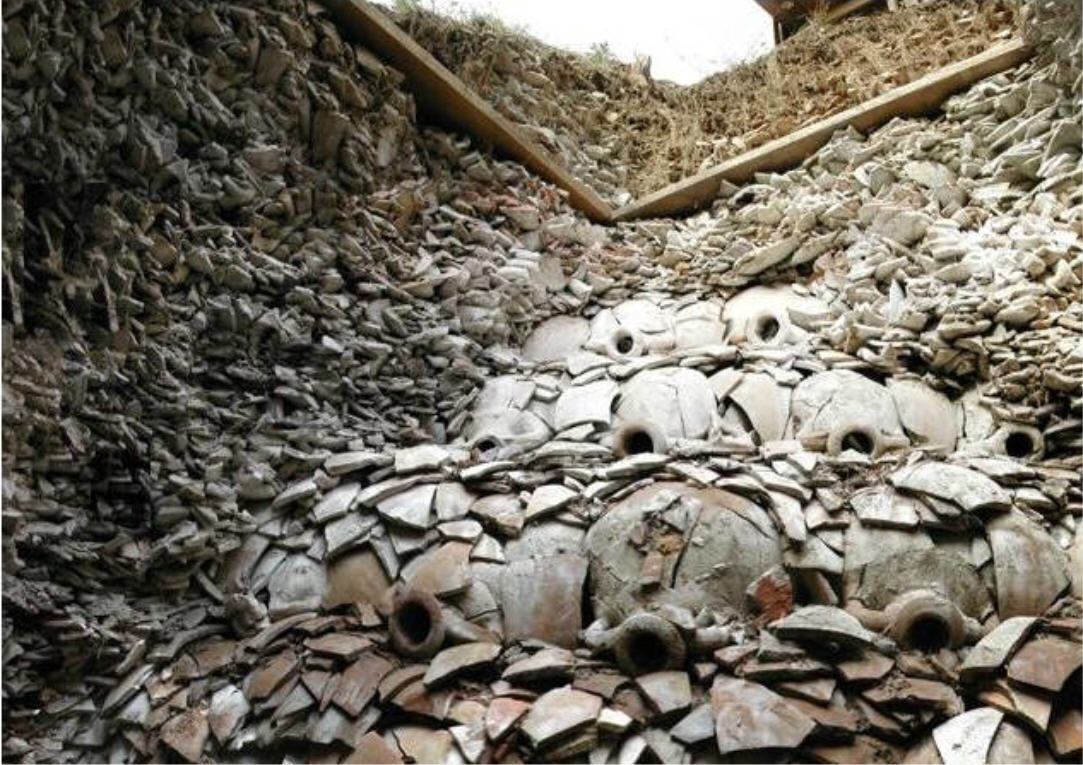 Some trash was taken away on barges and the Romans also recycled, though we should not imagine that it was for environmental reasons but rather for economic ones. Citing Statius and Martial, the article Romans used to recycle glass states:

...in the first century there were "ambulator" that roamed the city trying to get to the broken glass...

because recycled glass was cheaper to use due to the lower temperature needed to heat it. Metals were also recycled; in 2016, Israeli archaeologists found a shipwreck near Caesarea with a cargo of scrap metal (statues, coins) destined for recycling. According to the Israel Antiquities Authority statement, recycling of metal statues was very common:

Metal statues are rare archaeological finds because they were always melted down and recycled in antiquity.

Tracing the Trickle-down in Roman Recycling

Not the answer you're looking for? Browse other questions tagged ancient-rome public-health or ask your own question.

3
How did the Romans handle “fatbergs” in their sewage system?