In Scandinavia, was there a cultural continuity from Goths to Vikings or were they two different groups of people?

The earliest origin of the Gothic people/culture is commonly placed on the Scandinavian peninsula, in the region of Götaland (in southern Sweden) and/or the island of Gotland (off the eastern coast of Sweden).

Similarly the origin of Vikings is often placed in the area of Roslagen (roughly around where Stockholm is located).

These localities are shown in the image at the bottom of this question.

Question is: In Sweden, was there a cultural continuity from the Gothic culture to the Viking culture, or were these two different groups of people? 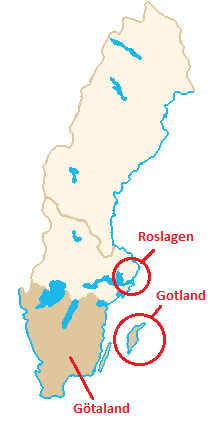 First of all, you have confused the Vikings (seaborne warriors) with the Rus, the Scandinavians who according to chroniclers founded Russia (hence the name); I'm not sure if this idea finds favour among modern Russian historians. The Rus are thought to have their name from Roslagen.

About another assumption you make: If you would ask a Swedish historian of today whether the Goths had really emigrated from Southern Sweden, he would most likely look at you strangely. Such ideas were once common in Sweden, in a school of thought called gothicism, but during the last hundred years or so, it has been seen as untenable: there is simply not good enough sources to say anything about the history of Sweden until we get some glimpses through chronicles written by Christian outsiders.

The earliest possible notice we have of the Goths come from Tacitus, who in his Germania (ca 98 CE) wrote about the "gotines", who apparantly spoke a Gallic language, and the Gotones, who lived near but separated from the sea by other tribes, somewhere in Northern Poland.

We also have the works of the Gothic historian Jordanes, who wrote that the Goths had emigrated from the island Scandza, and founded a new home they called Gothiscandza. Jordanes provides more details of Scandza, including the names of some two dozen tribes that lived there, and some details of geography which has bewildered those who have attempted to reconcile it with actual features in Sweden. Note that Jordanes wrote at least 400 years after this migration must have taken place, if Tacitus is to be believed.

Apart from this, there are a couple of words that are common between Gutnish, (the old tongue of Gotland) and Gothic, as well as the findings attributed to the Wielbark culture, which some historians has interpreted as the earliest physical traces of the Goths, located around the mouth of the Vistula.

It should perhaps also be noted that all Germanic tribes taking part in the Völkerwanderung except the Franks had a legend of a Scandinavian origin.

If we, finally, rephrase the question as if there is any evidence of large scale displacement of the Scandinavian population during the first millenium CE, then the answer is definitely no. One can argue about how sharp a line there were to the Sami or Finns, and where the line went, but there is no or very little evidence of any large upheavals. One evidence against this is that in southern Scandinavia, you find no, or very, very few (old) place names that is not of Germanic origin. Similarly, you can find continuity in material culture, even though there obviously were many differences between the beginning and the end of this period.

Not the answer you're looking for? Browse other questions tagged vikings sweden goths or ask your own question.