Why didn't Asian teams participate in the 1950 World Cup?

The Fourth World Cup was held in Brazil in 1950. It has the distinction of being the first World Cup held after a 12-year hiatus for World War II.

It also has the distinction of being the only World Cup India ever qualified for, due to all the other teams in their region dropping out during qualification. However, India also ended up having to drop out after qualification, and never played a game.

Why did so many teams from one region drop out? Was it a financial issue? Were they protesting something?

Only four Asian teams – Burma, India, Indonesia and the Philippines - entered the 1950 World Cup qualification rounds and these were placed in Group 10 with the top team qualifying for the finals in Brazil.

According to the article India and the 1950 FIFA World Cup: "What If...", the reason that Burma, the Philippines and Indonesia withdrew was that

... they found the long trip to Brazil economically unfeasible.

However, there were probably other factors involved, at least in some cases (on which more below). After these three countries withdrew, only India were left in the group; they therefore qualified without playing a game. India's withdrawal was most likely for a combination of reasons: officially, it was due to a lack of preparation time. However, as the decision was taken behind closed doors, we may never know for sure.

THE WITHDRAWAL OF BURMA, THE PHILIPPINES AND INDONESIA

From sources, there isn’t much to go on other than financial costs, which was also the reason for Turkey’s withdrawal. However, some possible additional reasons can be deduced, not least the fear that they would seriously outclassed.

Burma had only played their first ever international match in February 1950 and had lost 5-2 to not-so-mighty Hong Kong.

Indonesia may also have felt the same way, probably correctly as they were brushed aside by India in the 1951 Asian Games. Also, in 1938, playing as the Dutch East Indies, they had flown all the way to France only to play one game in which they were thumped 6-0 by Hungary. Interestingly, Indonesia were invited despite not being affiliated to FIFA at the time.

Philippine football appears to have been a shambles in 1950, even more so than usual. It lacked “funding and support from the media” and the Philippine domestic championship had not even been held since 1936. The Philippines also didn't manage to compete in football at the 1951 Asian Games, unlike Indonesia, India and Burma (though they did perform credibly in other sports). This was quite a fall for a country whose team had once beaten Japan 15-2 (in Japan, 1917).

The reasons for India’s withdrawal are more complicated and are still disputed to some extent. The Press Trust of India press release on the 23rd of May 1950, quoted here, said:

India will not participate in the World Cup. Due to late information reaching India, the team will have to be flown to Rio resulting in cancellation of team selection meetings. Since there is not much time, the Indian team will not be able to prepare and hence it will not be correct to send the team.

This press release came one day after the draw for the groups in Brazil had been announced, in which India had been put in Group 3 along with Sweden, Italy and Paraguay. Various additional reasons, though, have been given for India’s non-participation.

One was the fear of being humiliated, but this theory is not entirely convincing. Although India (36) were the lowest ranked team in their group, they were not the lowest ranked in the tournament (the US at 40 and Bolivia at 63 were lower). Sweden would have been a handful but the Italian team had been weakened by the 1949 Superga air disaster and a draw against Paraguay would not have been beyond the Indian team's capabilities. Further, India had performed credibly at the 1948 London Olympics, missing two penalties in losing 2-1 to France. On the other hand, the fact that Indians were used to 70 minute matches instead of the usual 90 minutes may have caused some concern about their fitness levels in Brazil; the press release's citing of lack of time to prepare may be related to this.

Another reason cited was FIFA’s insistence on football boots. Indian players often played without boots and the FIFA rule has been cited as a reason for India withdrawing. However, according to Indiatimes.com “Nowhere in any of the discussions at the time was the barefoot issue.” Again, though, the 'not be able to prepare' mentioned in the press release may allude to this: perhaps the All India Football Federation felt the players would need more time to adjust to playing with boots.

The cost of going to Brazil has also been put forward, but this ignores the fact that the organizers had offered to pay most of the Indian teams’ expenses - and the press release did not mention this. 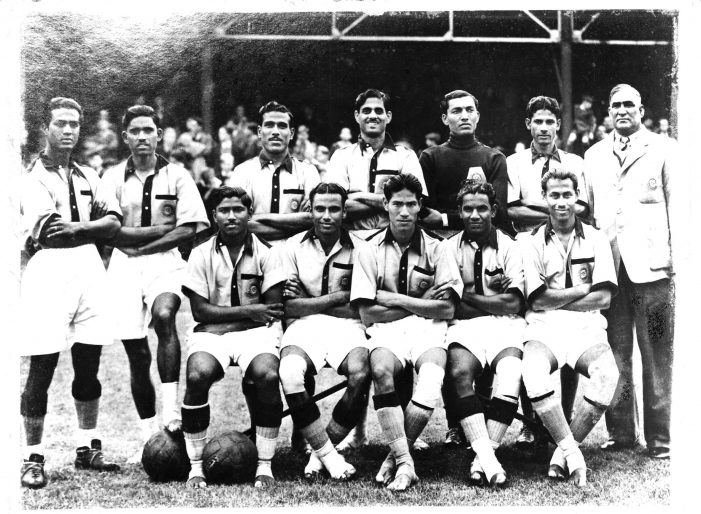 The Indian Football Team at London Olympics, 1948. Note the players without boots.

All of the above may have contributed to India’s withdrawal, but a bigger reason may simply have been the All India Football Federation’s failure to appreciate the importance at the time of the World Cup. It seems that everyone was much more focused on the next Olympics, as indicated by Indian captain Sailen Manna’s statement:

We had no idea about the World Cup then. Had we been better informed, we would have taken the initiative ourselves. For us, the Olympics was everything. There was nothing bigger.

In short, it was probably a combination of factors with the last cited possibly being the main one. It should also be noted that the FIFA World Cup in 1950 had nothing like the reach and global pull that it has now. Many teams refused to compete for various reasons, including the entire Soviet bloc, Argentina, Portugal and France. Scotland qualified but the Chief Executive of the Scottish FA refused to let the team go as they hadn't won the British Championship, having been beaten by England. Chief Executive George Graham turned a deaf ear to fans and the Scotland players, and even the England captain tried to persuade him, but it was all to no avail.

As to why other Asian teams did not enter, covering them all would be a major task, but Japan (along with Germany) were banned from participating due to their ‘role’ in WWII while Korea and China were probably too concerned with domestic issues (civil war) to have even noticed the World Cup. Thailand had joined FIFA in 1925 but does appear to have had a Football Association President between 1938 and 1953. South Vietnam did not even join FIFA until 1952, and the North not until 1964. Most other Asian countries had little in the way of football tradition or domestic competition.

From the Cup Archives

The excuse given was apparently that FIFA had instituted a rule prohibiting players from playing barefoot But the real reasons, according to Saileen Manna, seem to be that financing both the World Cup and the Olympics was budget-breaking, and emphasis was given to the Olympics by choice.

From History of the All India Football Federation

In 1950, India automatically qualified for the World Cup to be held in Brazil that year. In the preliminaries, they were clubbed with Burma and Philippines, both of whom withdrew. However, India could not compete in the 1950 World Cup final round, as the AIFF lacked sufficient funds to bear the expenses of the passage. There were also apprehensions that the mainly barefooted Indian team would get routed in the World Cup.

Not the answer you're looking for? Browse other questions tagged india asia sports or ask your own question.

6
What were the effects of US foreign policy in the South East Asian region in the 1950s, 1960s and 1970s on states with capitalist economies?
13
Why didn't Marathas rule Delhi officially?
14
Was the British Empire financially capable of maintaining India as a colony after WW2?
7
Why didn't Asians discover Australia?
1
Why did Americans stop calling the Olympic basketball team the "Dream Team"?
2
Was there any politization of "hard" science (math, physics, chemistry, biology) in the Asian communist countries?