I am writing a paper about mortality during the last years of Weimar Republic, namely 1928-1933. Presenting the data in Berlin, scholars wondered about the reason why the figures about people dead by murder and manslaughter (Mord und Totschlag in German) were that high. During the period 1927-1937, homicide rate has its peak at 1.9 every 100,000 people in 1932, which reported to Germany entire population of that year is around 1249 murders in a year.

I made a Google search about crime in Weimar Republic and I actually found out that high level of crimes were mostly perceived rather than actual. Indeed, there has been three serial killers during that period and a bunch of political murders but nobody consider the numbers particularly astonishing. References: "Rethinking the Weimar Republic: Authority and Authoritarianism, 1916-1936" by Anthony McElligott and "A short History of the Weimar Republic", Colin Storer

EDIT: I found this graph from Pinker (2011), which actually shows that Germany, even murder rate is low in absolute has the second highest value after Italy in 1920s-1930s 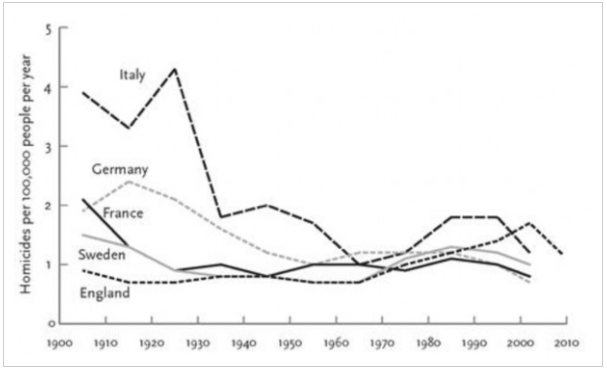 Is anybody aware of the reason why murder rates were that high in Germany in that period? Or does anybody know sources, which may give an explanation?

During the Weimar Republic the society in Germany was extremly divided. So there were also quite a lot of political murders and actual firefights between right and left wingers. I think this should also be taken in account.

In German, an article about political murders mainly in Bavaria, where quit a few politians got murdered. Then there was for example the case, when 21 members of some church group were murdered by some right winger, probably mistaken for members of some left wing organisation. In a society where usually not that much people get murdered, those political crimes can actually push the numbers quite a bit.

Not the answer you're looking for? Browse other questions tagged germany weimar-republic or ask your own question.

13
What goods did Germany trade during the Weimar Republic, and with whom?
35
Why did the Soviet Union lift the Berlin Blockade?
12
Conditions of Upper-Silesian-Poles minority in Weimar Republic?
2
Why couldn't the Weimar Republic peg their currency to another one?
3
How common were foreigners in the Weimar republic?
4
Why was the KPD mandate abandoned in 1933 Germany?
11
Was the Weimar Republic referred to as such by contemporaries?
4
Babylon Berlin TV series: how historically accurate are the subplots about poison gas and false flag assassinations?
1
How did redenomination prevent the Weimar Republic from further decline?