Why did the wagon forts of the Hussites fade away?

The wagon forts of Hussites were quite successful tactically, and helped them repel five crusades from European leaders. I was wondering why did the wagon fort tactics not see a wider adoption in contemporary warfare. These in particular and mobile fortifications in general...

In the 15th century, during the Hussite Wars, the Hussites developed tactics of using the tabors, called vozová hradba in Czech or Wagenburg by the Germans, as mobile fortifications. When the Hussite army faced a numerically superior opponent, the Bohemians usually formed a square of the armed wagons, joined them with iron chains, and defended the resulting fortification against charges of the enemy. Such a camp was easy to establish and practically invulnerable to enemy cavalry.

The crew of each wagon consisted of 18 to 21 soldiers: 4 to 8 crossbowmen, 2 handgunners, 6 to 8 soldiers equipped with pikes or flails, 2 shield carriers and 2 drivers. The wagons would normally form a square, and inside the square would usually be the cavalry. There were two principal stages of the battle using the wagon fort: defensive and counterattack.

A video. Not very academic, but good to get a feel of the era. 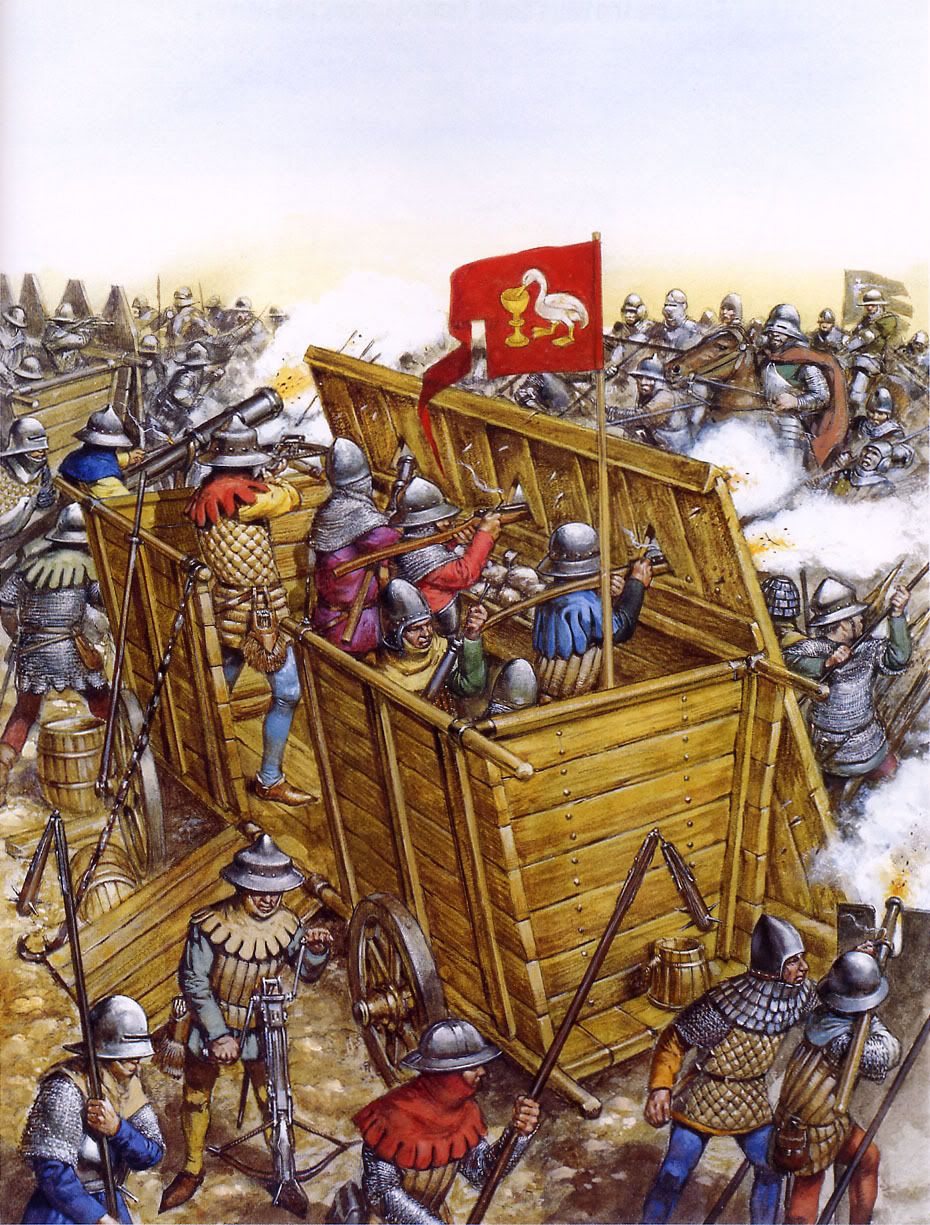 There are several reasons that probably played together

First, the Wagenburg was a device of asymmetric warfare, that proved effective when first used against Crusader and Holy Roman forces, that still mostly relied on heavily armed knights, and were arrogant enough to charge head-on.

Later the asymmetry faded away as these tactics became more or less prevalent in the region – for example some Hussites changed sides and supported Emperor Sigismund, while others became mercenaries (for example in the army of Corvin Matthias in Hungary – and this immediately decreased its usefulness: Two wagonforts set up on opposing hills and trying to trick each other into opening the circle or trying to starve each other do not represent a particularly efficient way to decide a battle.

Simultaneously, the enemies of the Hussites learned tactics that could sometimes be used to defeat such wagons: See the Battle of Lipany again.

Secondly, as field artillery advanced both in mobility and firepower, it would have meant more danger to the wagons. Wood is a credible material to be used against arrows or contemporary small arms, but can not absorb cannonballs the way earth ramparts can. It will burst into deadly fragments, as the poor sailors of 18th century warships had experienced. So if your plan is to sit in your camp and weather the enemy charges, but the enemy sets up a powerful battery on the next hill, you are dead.

Thirdly, the type of armies that used the Wagenburg – namely mercenaries and religious fundamentalists, recruited mostly from lower class burghers and peasants, and sometimes gentry – had by the end of the 15th century developed a much more effective tactic: dense pike (and shot) formations These were almost as cavalry proof as the wagonforts, while they were much more mobile. They could actually charge on the field and they could be disassembled to much smaller pieces (individual landsknechts). So they could pass on any kind of terrain (including in siege trenches) and then form up as necessary. Look at how Marignano was different from battles a century earlier.

Other countries, namely Poland and Hungary, where the wagonfort was introduced, later lost their strong royal authority, while they developed the highest percentage of nobility. Without strong kings, they could not afford standing professional armies, and their poorer nobles preferred horseback fighting. Hussars emerged. (whose etymology is uncertain, but has nothing to do with Hussites ) So the Ottoman wars in Hungary after the disaster at Mohács (still fought with armoured knights) consisted of sieges and raids. On raids, the wagons are a hindrance, and they are not needed during sieges either: The besieged have better fortifications already, while the attackers are usually so overpowering, that they need little defense, or they have plenty of time to build proper contra- and circumvallations.

Not the answer you're looking for? Browse other questions tagged military warfare czechoslovakia or ask your own question.

11
Did the Gallic army besieged in Alesia conduct itself well when expecting relief?
26
Why were troops with bayonets often effective against enemy cavalry even though the bayonet was a “secondary” weapon?
3
Why did the musket become the standard infantry combat weapon in European armies around 1700?
4
From how far away could an experienced and skilled archer hit a man?
6
Why didn't the Communist Party in Czechoslovakia use the military to suppress the protests during the Velvet Revolution?
4
Did the USSR pledge support to Czechoslovakia before the Munich Agreement?
14
Did the Czech Legion bring POWs to Czechoslovakia? And if so, why?
1
How did an advancing force walk during WW1?
2
How was the Free Czech Army formed in World War 2?