Why did certain swords have the weird curves that they did? [closed]

I don't know if this belongs in history because it talks about pre-modern weapons or if it belongs in like physics or engineering, but in looking at references of swords, I noticed they have a large variety of curves. Would someone be able to elaborate on what these different types of curves accomplish? I don't expect anyone to be an expert in all types, but any info would be helpful. It should be noted that the very tips and hilts are not meant to be accurate, rather it is the curve of the blade along the length that is the focus. Also why did some swords have indents or channels running down the middle? 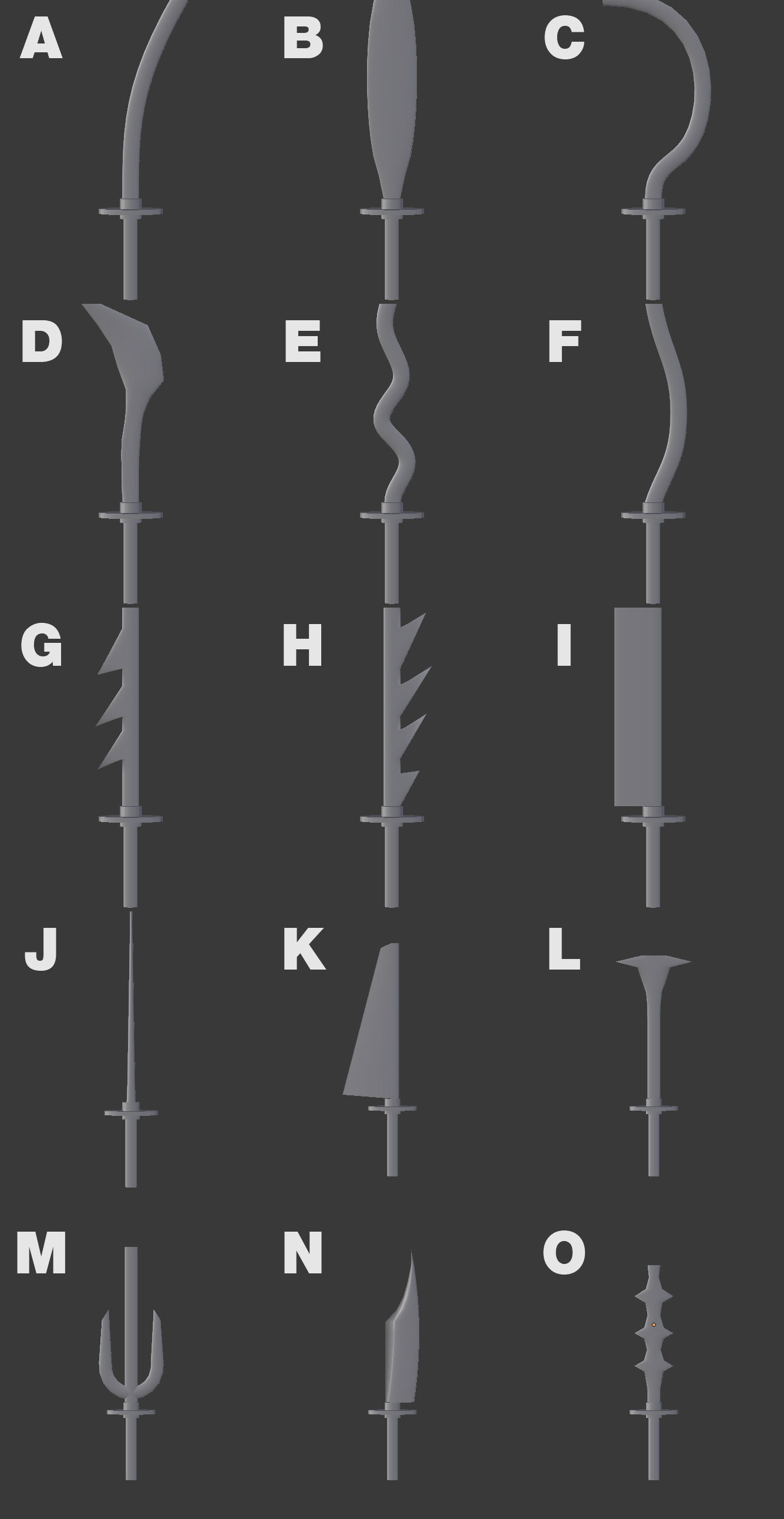 This started out to be a short answer OP has subsequently clarified that the images are low res reference images based on internet images or memories; this makes it very difficult to answer the question. The dimensions and provenance for each blade is not known.

A) - curved blade possibly similar to a katana. The curve in the blade makes it more appropriate for a draw cut than for a hack.

B) possibly a xiphos. Might be something else, because the leaf section of the xiphos usually starts further down the blade; in this picture the leaf emerges from the hilt. Xiphos is one handed, so it should have a shorter hilt.

C) Looks like a khopesh or sickle. There is plenty written about Khopesh, but I don't think we have any real evidence as to how they were used. I believe they were one handed, so it will have a shorter hilt.

D) Moving the mass to the tip of the blade generates more force in the hack. This is effectively an axe. It will require lots of strength to wield, but when it hits, it will hit with force.

E) It is possible that someone is depicting either a flamberge or a kris - but both of those blades tend to have sharp points. I haven't trained with either blade, so I'll defer to someone better educated. I'm somewhat skeptical that a blunt tipped wavy blade is real.

F) No comment - This could be a bad drawing of a saber. Not my weapon, but a saber's curve emphasizes the cut and reduces the chance it will get stuck. (defer to a cavalryman if there is one around)

G) Looks fantastical; might be some form of a swordbreaker, or it might be really badly drawn bowie knife. The serrations (if that is what they are) may have utility in a knife/tool - for sawing meat or bone. I'm skeptical that they have any martial value.

H) looks fantastical; might be a swordbreaker or it might be really badly drawn bowie knife. I am skeptical that the teeth have martial value. It is also possible that this is a variant on a Mesoamerican weapon - because of the state of their metallurgy, they implanted obsidian in wood; the result was actually sharper than steel, but extremely fragile. It did have a very jagged appearance. I don't know enough about how it was used.

I) Reminds me of an executioner's sword. Executioner's swords are designed to be heavy to ensure success with a single cut. Not practical for any other use. You're going to heft this into the air and then help gravity to drive it downwards. (This blade has the mass of a hacking weapon and the edge of a cutting weapon, but it would not be used in combat.)

J) A thrusting sword; I know less about HEMA, but it reminds me of a rapier. Metallurgy has to be advanced to create a sword that is strong, flexible and long. It is only practical if you are confident that your opponent is not wearing armor.

K) I have no clue

L) Ikakalaka Apparently many games have adopted this sword as a kind of armorbreaker the additional heft at the tip, combined with the two points pierce armor. I'm unaware of anyone with practical experience.

M) This looks like a very badly drawn sai; a sai is a subtle weapon with multiple uses, but the prongs can be used for sword trapping.

N) I suspect this is a knife rather than a sword.

o) I suspect fantasy; OP clarified that all blades are real. This may be a ceremonial weapon.

As general rules (there are violations of all of these)

You might want to cross post in martial arts stack exchange; there are some very educated folks there. They are also very good at dispelling the mythology of certain weapons. I don't train with kris, but I'm skeptical that they are distinctively deadly due to the waves. There is a lot of mythology with weapons for the simple reason that we can no longer train realistically. Back in the day there was immediate feedback; bad technique died, good technique lived. Today we don't get that feedback. I recently read an essay by a very skilled martial artist who had practiced a particular technique for years; he cross trained with someone from another style and discovered that this technique was completely ineffectual against the rival school (in fact, it resulted in his death 9 times out of 10). But his weapons school had taught that technique for generations. My own school teaches a knife fighting based on assumptions drawn from a particular decade in Japanese history; it isn't very effective against other schools. Both of these are myths - inherited beliefs based on assumptions that were of limited scope. (I'm going to stop before I write another essay - Marie Brennan has written a couple of essays on the cultural role of weapons that are useful).

My professional historian girlfriend pointed out that all the hilts are the same, which is not correct, and confuses scale. For example the sai is a single hand weapon; the katana is a two hand weapon - the hilt will be of a different length. (yes, you can wield a katana one handed, and there are styles that use two katana, or katana/wakizashi, but I'm trying to stay under book length).

OP asks about the difference between hacking and cutting; I wish I had a better answer, but it took me a thousand cuts to learn the difference. (It would probably be more honest to say it took me a thousand hacks to learn to cut.) There is a Chinese proverb that you can give a man a Dao and a hundred days and get a soldier, but it takes the wielder of a jian a thousand days to be be a beginner. (from memory - I welcome corrections). It occurred to me last night that it is like cooking - you might use a cleaver to hack off a joint of meat (cleavers are heavy), and then use a paring knife to slice it for preparation.

OP asks about bleeding - I'm skeptical, although I can't justify that without a very long essay. despite everything I said above about the jian as a long scalpel, combat has a strong feedback cycle. Your opponent is trying to kill you; if you try to bleed him (except as a tactic to kill), you will get terminal feedback. As OP & I said in comments, the rules for ceremonial and ritual weapons may be different, but combat discourages inefficiency.

Not the answer you're looking for? Browse other questions tagged weapons sword or ask your own question.

14
Are the swords in the Oath of Horatii all Roman?
21
Why did Chinese use high tin bronze for swords?
16
Did any armies systemically favor axes/hammers over swords?
6
When did cavalry soldiers unsheathe swords?
55
Why did the Roman military start to favour swords over the spear phalanx?
11
Why were swords used in battle?