Can someone help me identify this sword?

It looks like a wide hacking blade, obviously a short sword. But because the tang isn't real wide and the way the handle fits, it looks like it was ceremonial or even ornamental.

The blade itself is 16" long x 2-1/8" with the initials J.B.S. and another B directly under the B in J.B.S. The initials are down by the hilt. Handle made of brass or bronze, Lions head I'm guessing. Can someone help me identify this. I don't even know where to start. 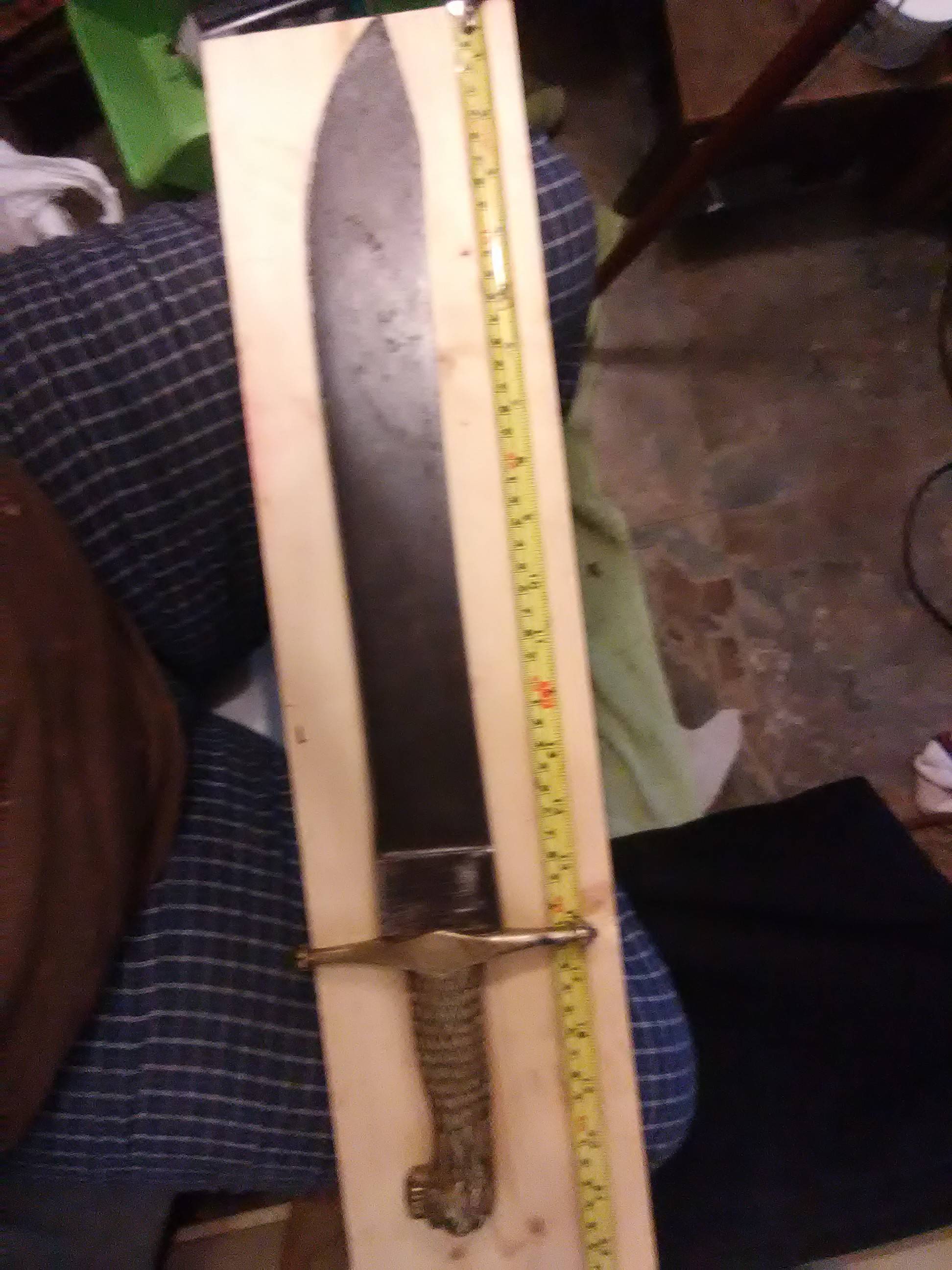 This is very likely another fascine knife (compare pictures on Faschinenmesser):

The fascine knife was a side arm / tool issued to 17th to 19th century light infantry and artillery. It served both as a personal weapon and as a tool for cutting fascines (bundles of sticks used to strengthen the sides of trenches or earth ramparts protecting the batteries). It could be straight or curved, double edged or single edged with a sawtoothed back. 17th- and 18th-century German, Prussian and Swedish fascine knives were more like cavalry swords, often with a brass handle and a hand guard, but later models were more like billhooks in shape and appearance.

These types varied very widely over the decades and before the end of World War One from every little state in Germany to another one, sometimes even within units. Note that once they were sourced and bought, or stolen from the French in 1871, they were never thrown away or sold, but kept in storage, sometimes repaired and modified.
These are indeed ceremonial in the sense that they are often quite prominently displayed on photos. But they were real tools foremost and real weapons in a secondary role.

A limited little overview over some of the different types: 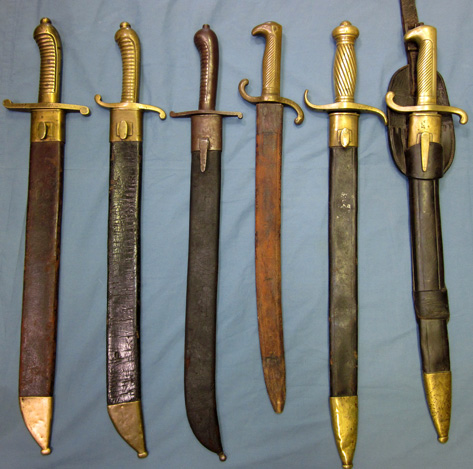 The basic model is unidentifiable for me from the picture provided until now. But since some of these models come already quite close (note that the serrated back was not on all models of the same model-number/type:) 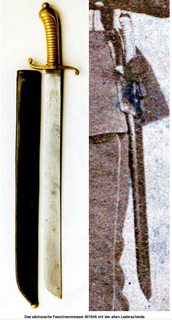 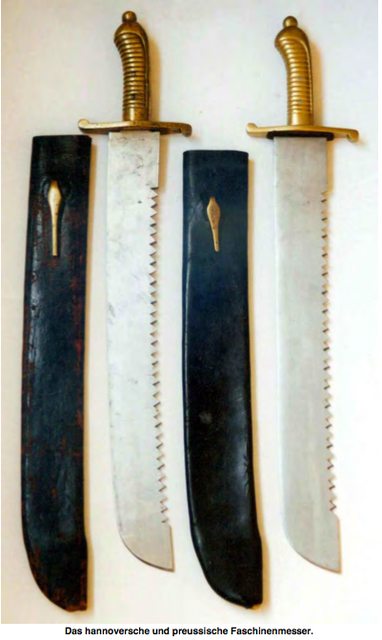 Preliminary (and speculative) remark concerning the stamped inscriptions:
It may look like "J.B.S." but very likely it has to be read "I.B.S", meaning "Infanterie-Batallion" probably Saxony? In any case this is probably not standard issue, used in Second World War material. Much more probable: this has to be dated to the 19th century.

Depending on what kind of lion head there is: probably Bavaria or Braunschweig? A Bavarian example from an auction: 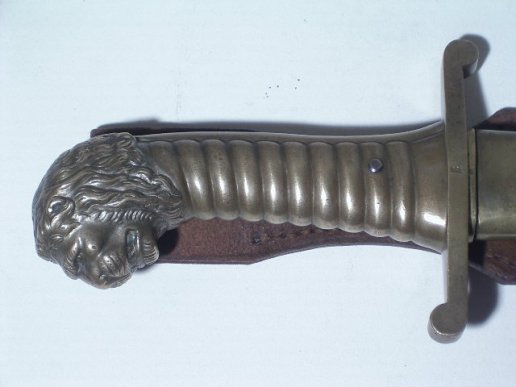 If it is indeed a Bavarian knife it seems to fall roughly into this line:? 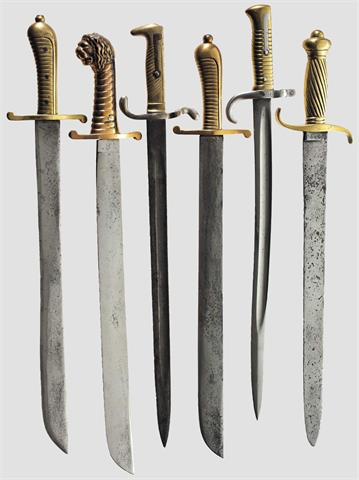 It appears to be a Spanish machete of the mid 19th century. They were issued to pioneer units (Gastadores) in the army. 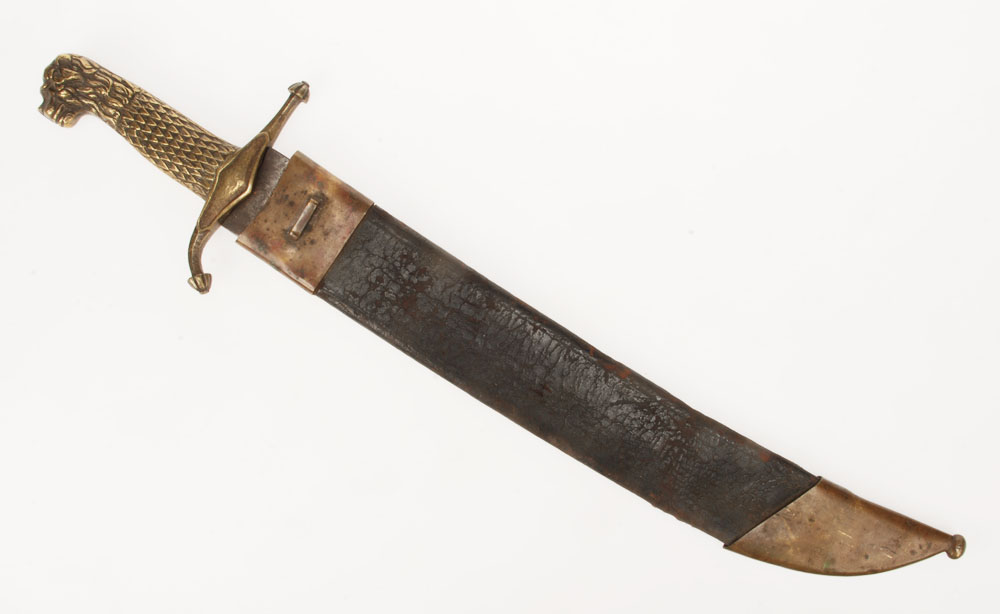 As the article suggests they were still being used at the end of the century during the Spanish American war, the result of which saw America gain Spanish territories like the Philippines, Guam, Puerto Rico and Cuba.

Not the answer you're looking for? Browse other questions tagged nazi-germany weapons identification sword or ask your own question.