Were Arctic communities aware how different daylight cycles were elsewhere?

At extreme latitudes, what we would think of as the typical day/night cycle becomes very different.

The sun remains continuously visible for one day during the summer solstice at the polar circle, for several weeks only 100 km (62 mi) closer to the pole, and for six months at the pole. At extreme latitudes, the midnight sun is usually referred to as polar day.

[I]n practice the midnight sun can be seen as much as 55 miles (90 km) outside the polar circle ... and the exact latitudes of the farthest reaches of midnight sun depend on topography and vary slightly year-to-year.

Presumably, native communities in the Arctic felt this was a normal pattern of the seasons. Were they aware that other places had a different day/night cycle? This could perhaps be mentioned in their mythologies or tales of other places.

I ask about the Arctic because there were far more people living in the high Arctic than equivalent regions in the south. I'm mostly curious about North American societies, but an answer could discuss European/Siberian people as well.

I stumbled on this old question the other day and am offering a bounty because Pieter's answer only hypothesizes that they were smart enough to --- which, of course --- but doesn't offer any specific evidence specific groups traveled far enough to notice.

First: I have a problem with what I see as an implicit assumptions in the question that primitive peoples were simpletons. To understand the phenomena of midnight sun only a few straightforward facts need to be recognized:

As soon as the measurement of time is possible in a culture, and individuals of that culture are capable of travelling substantial distances north and south, the second and third facts will be observed. As hunter-gatherer societies such as the Inuit, Aleut and Suomi meet all these criteria, we have no reason to believe that the following deduction was not made.

To address the challenge that primitive peoples "didn't travel that far in a lifetime":

The Caribou Inuit rely on the Caribou herds of Northern Canada exclusively, and follow them on their migrations across the height of the Canadian Far North. These migrations cross the Arctic Circle, from Hudson's Bay to the far reaches of Ellesmere Island, and occur semi-annually, in spring and fall.

Similar caribou migrations occur across the height of Eastern Alaska, and of reindeer herds followed by some of the Suomi people in modern Scandinavia and Siberia.

The question makes a deep assumption about the day-and-night pattern above the Arctic Circle that is invalid. This article on life in Tromsø, Norway, where the “Polar Night” lasts all winter, paints a more accurate description:

Over the following months I learned firsthand that, far from a period of absolute darkness, the Polar Night in Tromsø is a time of beautiful colors and soft, indirect light. Even during the darkest times, there are still two or three hours of light a day as the sun skirts just below the horizon, never fully rising. During the longer “days” of the Polar Night, in November and January, the skies can be filled with up to six hours of sunrise and sunset-like colors.

The detailed pattern of day and night is different above the Arctic Circle, but not in a fundamental way. The 24-hour cycle remains intact, just different in degree than what would be experienced a few hundred miles further south. 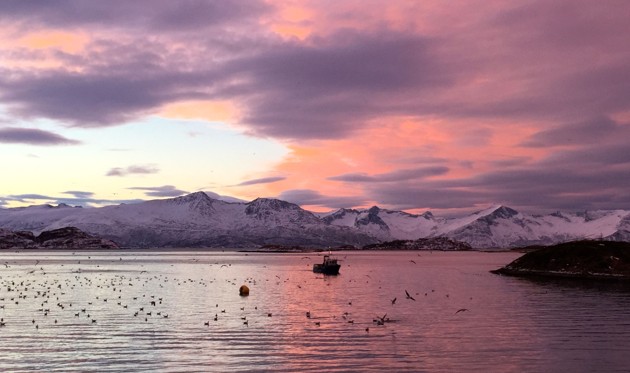 This is very difficult to prove as most of the northern civilizations did not have a system of writing down their knowledge. Even when they had this, they would have been hampered, as we understand it, by their incapacity to separate myth from scientific observation, i.e., their reasons for why the length of day varied would have been different to ours. Similarly, while they would have been aware of the changing length of the day, they would have had a difficult time trying to measure this difference or to systematize these measurements into a logical arrangement.

Specific encounters with northern civilizations where this topic may have been discussed could have occurred but I've not been able to find such an example. Hence, legends are the best bet, but a look into Chukchi mythology didn't find anything where they would have reasoned their understanding for the length of a day—but this may be disproven with more research.

A very good overview of Western vs native science is presented in 'Mapping the Marias' where the distinctions between the two are approximated by the experience of Lewis & Clark on a fork in the Missouri:

In the simplest, we could say that peoples like the Sámi and Mansi and whoever else would have used the 'least reliable' category in modern scientific parlance for the presentation of their understanding of the world. The level of 'logical deduction' would have played a role within the world as they understood it, but they wouldn't have conducted 'field surveys' of latitude, time of day, and length of day. This does not mean that they didn't understand that the length of the day changed, but rather that they wouldn't have been able to put their understanding of why this change in time occurred into a modern scientific construct.

The first account I know of which introduces a comparative point of view regarding the length of the day is Pytheas who commented on the summer sun not setting while relating these to the angle of the sun. Of course, there is uncertainty regarding where Pytheas actually sailed to (the link is to an answer of mine here where Iceland was asked about). Pytheas was an explorer: he described what he saw, which also caused some of the disbelief in the Greek commentators who read his works.

The north-to-south latitudinal difference in Europe for the Mediterranean sailing trips would have been greater than this. However, with a quick search I only found a reference to time of day in the sagas that detail the explorations westwards, with the length of day matching that in the Gulf of St. Lawrence, but this was a statement of fact and not a direct comparison.

Medieval Europeans—and perhaps Arabs—felt the effects of the longer day as presented by Turnbull regarding the knights of the Teutonic Order who needed a Papal dispensation to fulfil their duties during the winter day. These couldn't be considered scientific observations in the modern sense; rather these were problems of which the causes were solved. Generally, the effect of the problem was far more important than the cause.

The modern scientific method with its aptitude for measurements and observations was developed much later, and it was not until the early years of the 19th century that these were brought together in a comprehensive system to understand the world everywhere and not just locally. This would indicate that the best sources for such information on the northern peoples' understanding would be, for example, von Humboldt's 1829 expedition, but the quick overview I read indicated that the Emperor minimized von Humboldt's contact with the local people.

One of the complexities in finding solid aboriginal sources is highlighted in Siimets's summary of his understanding of the Chukchi legendarium. In it, he notes how Chukchi shamans use the power of the Moon—an opponent of the Sun—to heal and to perform spells, but are extremely wary of demonstrating anything to foreigners which may also have hampered the willingness of any prior aboriginal peoples from sharing their knowledge with foreign explorers. Also, based on that overview, in Chukchi legendarium the Sun is who gave reindeer to people. Regrettably, no specific mention of their associations with the length of the day are made there. I also looked through a short collection of Chukchi myths which, while mentioning the passing of the seasons and the association of the length of day with this, didn't specifically describe that the day would be longer further south.

Yet, one of the things we do know clearly is that both the winter and summer solstice have been known and understood as the events which mark the lengthening and shortening, respectively, of the day from then on. Solstice as an event is marked from Ireland to Oregon to Saskatchewan to Australia (incl. the Chukchi mentioned in the previous paragraph). However, an understanding of the time of the solstice does not automatically link the length of the day at solstice to one's latitude.

Yes they were, Because inuit socities moved Southward and northward with periodic climate optimums and minimums during sucessive cooling and warming periods. And the effect of sunlight and nighttime cycles Differ even if you move a mere 100 miles north/south.

35
When were 'time zones' (or at least time difference) discovered?
2
Did Naddodd really discover Iceland?
4
Were Medieval Islamic peoples in Northern Eurasia given religious dispensations due to the long diurnal cycles?

18
How educated were the clergy during the Medieval period?
11
How was Canadian sovereignty in the arctic threatened in the 1950s?
11
How prominent were taverns in medieval Europe?
15
How densely populated were the Americas prior to European colonization?
4
How were native laborers on California ranchos treated?
7
How were laws promulgated in the Middle Ages?
5
How were newspapers delivered to flats in post-War Britain?