How to attack Fort Ross 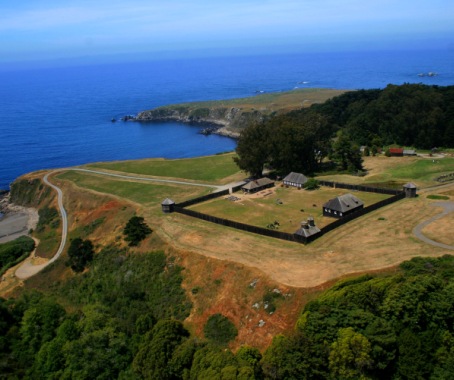 Imperial Spain was upset when the Russian-American Company founded its Californian outpost Fort Ross. Local Spanish officials always stayed cordial with the Russians, though. Both sides were remote colonies, and a confrontation between them could be mutually destructive. The Spanish military in California anyway had insufficient men and materiel to mount a threat. The capital Monterey was destroyed in 1818 by just two ships acting on behalf of Argentina.

The fort consists of buildings inside a redwood palisade on a high coastal bluff. It was staffed by 25-100 Russians plus 50-125 native auxiliaries. There was a freshwater spring and iron and copper smithies. It initially received 10 bronze and 15 iron cannons [Farris, So Far From Home, pp. 84]. Small towers in two corners housed some of them. To reach the shipyard and port was a day's ride or a few hours in a skin boat. I'm not at all sure how long it could afford to be besieged.

Spain considered and declined mounting an attack on Fort Ross. Diplomatic implications in Europe made it less attractive. The two emperors Alexander I and Ferdinand VII had signed a treaty to collaborate in Europe, but that didn't seem to foreclose the military option in California. Whether Spain was deterred more by the cost of an attack or its side effects is interesting, but I want to know about Spain's projected successful attack on the fort: the one the Company built up its defenses to prevent, and Spain decided not to undertake.

To take Fort Ross, how big would that expeditionary force have to be? Was it expected to breach the stockade right away, or rather to maintain a siege? Could any Spanish approach cause the fort to surrender without a fight?

Note first that the stand of trees in your photograph, as to be expected, did not exist when the fort was in use

Then, note that to our left and due east of the fort is first an overgrown ravine, then a sloping hill about 30 feet higher than the fort. Artillery here would have quickly demolished the wooden stockade, and had a clear view of the entire fort as well as the small community west of it.

The coup de grace would then be done by infantry advancing down the peninsula to the fort, and possibly also from the point south west of the fort.

For the garrison as listed, and assuming no great difficulty trekking overland to the fort, then an infantry battalion, two artillery batteries, and a squadron of dragoons should not have difficulty investing and capturing the fort with modest casualties.

The more interesting problem is if the assault must be done amphibiously. As "A ship's a fool, to fight a fort", it would be necessary to find a suitably close location for disembarking out of range of the fort's guns. I'll leave that for tomorrow.

The wooden stockade and towers, more than a century post-Vauban, are clearly not intended to defend against a serious assault, or capable of doing so. They are sufficient only to protect against a coup de main and force an assault of some sort. They are a delaying tactic; intended only to buy sufficient time for stronger defensive forces to assemble and arrive.

From the Point North of the Fort

The Details - Emplacing the guns

Outnumbering the defenders 4-1 with the advantage of greater artillery and cavalry, advancing across a flat plain devoid of significant features is not a challenging military operation. The brigs are still standing off Blue Beach threatening a coup de main against the forts' guns if the garrison attempts a significant sortie. There will be casualties, but my expectation is about 30-40.

The biggest challenge will be being patient enough to wait for suitable wind, tide, and waves. This looks to be a lee shore, and a rushed landing could result in loss of one or more vessels on those rocks. The fort is well situated, defending the friendliest landing beach for miles around. However once landing conditions are suitable, I suspect that less than 36 hours would be needed to entice a surrender with Honours of War.

My guess is that thee were originally plans for a larger fort on the larger point, which might have been a truly formidable structure, but economics never became justified.

In an actual scenario, the assault force will not be quite the one listed above. The infantry battalion will have the grenadier company, and maybe one fusilier company, detached for another operation. Only one brig will be available in the requisite time frame, and the frigate will be a small 32-gun frigate with only 9-lbers instead of the desired 18-lbers. A commander must make do with what he has got. The garrison is probably under-strength somewhat as well. Accomodation must be made, and time frames may slip a bit in consequence. That is the reality of war. Perhaps a spy has been slipped into the fort, and a night-time coup de main is in consequence conceivable at Blue Beach. Remember that the normal crew of a brig is half as numerous as the full garrison of the fort, and a brig is a very seaworthy vessel; in calm weather one could easily be overloaded briefly with 2 or 3 hundred soldiers. Have fun with this.

Not the answer you're looking for? Browse other questions tagged military russia california spanish-empire colony or ask your own question.

8
Does any library hold the archives of the Russian-American Company?
4
Who left Fort Ross to defect to Mexico?
1
Who accompanied Canónigo Fernández to Mexico City in 1822?
3
Why was Highway One routed right through Fort Ross?
6
Did California mission priests administer, not merely call for, corporal punishment?
2
Was an adobe fort or a palisade fort more defensible?
15
Did Britain look into taking California?
6
The Russian-American Company in Valparaíso
4
Who was the Irishman that betrayed Coronel's gold claim?