What (primary) sources are there on the life of female slaves in Classical Greece, more specifically Athens?

Since there was often a difference in what jobs male and female slaves were respectively made to work in (and there even being one exclusive to women, being a wet nurse), I was wondering whether, for example, female slaves were viewed and treated differently, whether they had, as would be my guess, a lesser chance of manumission, and how we would know about such things, meaning what primary sources do we have on female slaves specifically?

Off the top of my head I could only think of the inscription chronicling the "Sale of property confiscated from those condemned for mutilating the Herms and profaning the Mysteries" (IG I3 421), which included a list of slaves formerly belonging to the metic Kephisodoros, and named, next to price and taxes, the region they came from, at times their age, and their gender. But the price didn't seem to depend on gender all that much (correct me if I'm wrong). Other than that I thought of Aristotle's writings, but, unless I overlooked something, they mostly mention female slaves in passing.

I'd be most interested in sources from and about Athens in the Classical period (480 - 332 BC), but I'd love to read about the other city states as well, especially in comparison to Athens.

Information on how slaves were treated in the 1,000 or so city states other than Athens is thin on the ground; for most of these city states we know next to nothing about them so comparisons between Athens and other cities are very difficult. Further, much of what we do know (even about slaves in Athens where are sources are far better than elsewhere) comes from thousands of small pieces of evidence, all of which have to be examined carefully in their context before any attempt can be made to relate them to other pieces of the puzzle. Putting all this together has already filled several books so it is impossible to give more than an overview here.

How slaves were viewed and treated really depended on their role; also non-Greek slaves were typically not treated as well as Greek ones, particularly as most Greeks were sensitive about having other Greeks as slaves (consequently, fellow Greeks captured in war were usually sold abroad). Much also depended on the owner: some were harsh masters who sometimes kept slaves in chains, others were much more lenient.

Both male and female slaves could be viewed quite positively (for a slave, that is) or with scant regard for their well-being. Female slaves were mostly used for domestic chores such as cleaning, shopping, fetching water and looking after children, and generally had a relatively comfortable life compared to those females (non-Greek) sold into prostitution where abuse was not uncommon. However, life could be hard for domestics under a harsh master while prostitutes in brothels could become hetairai and thus gain more control over their lives.

Male slaves also had varying fortunes. A slave who worked in the fields might have had a hard life or might have developed a close relationship with his smallholder master through working next to him every day. Male slaves were also used as domestics for a variety of chores, as were children. 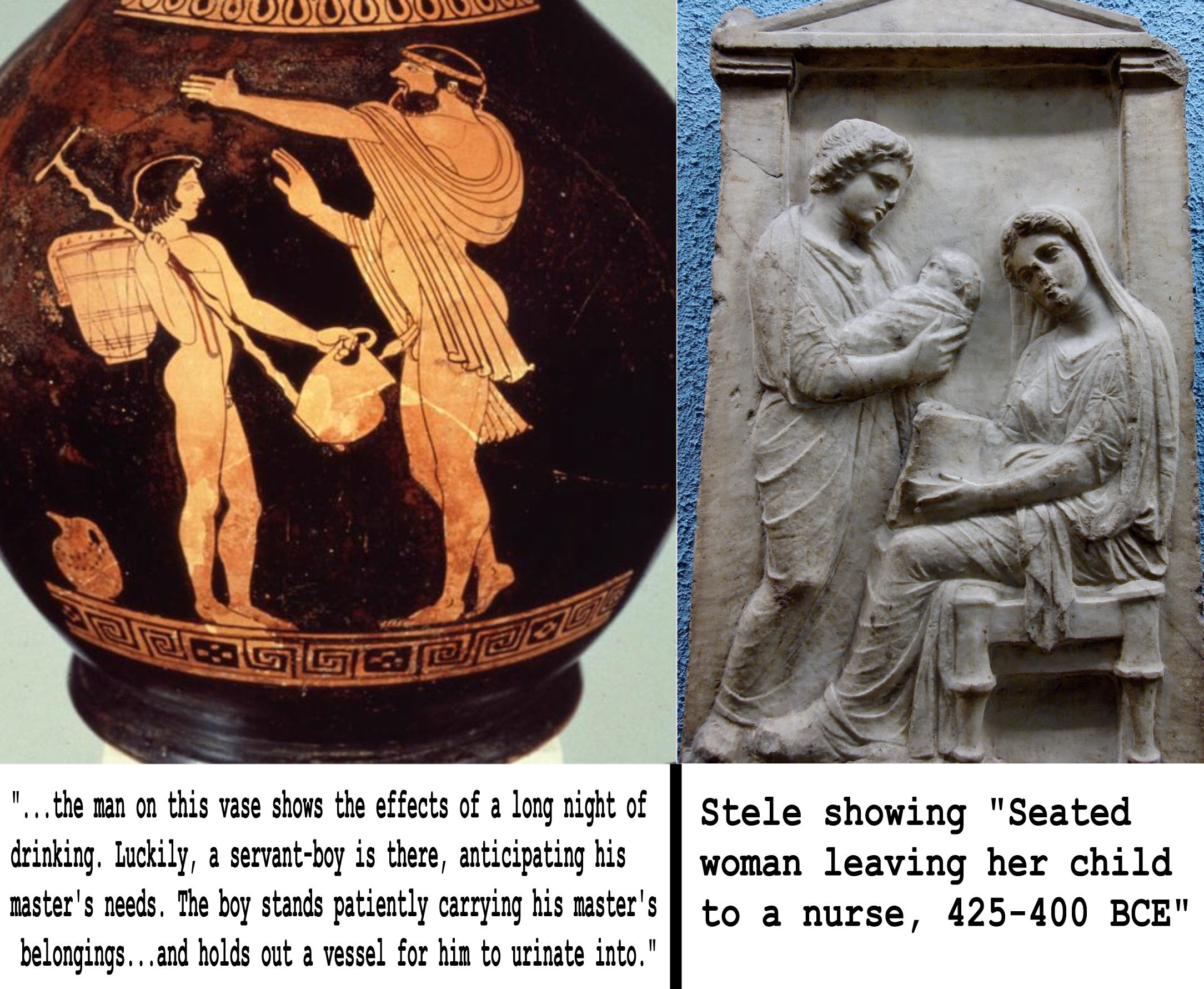 In Athens at least, some male slaves held positions of importance in the state; for example, a slave was responsible for implementing regulations about silver coinage:

The main official responsible for implementing the law is a public slave called the Dokimastes, or Tester...The Tester was ordered to evaluate any coins given to him for examination. ....In the event that someone refuses to accept silver coins approved by the Tester, all his goods on display that day are to be confiscated.

Although this was a position of some responsibility, the tester could be whipped for not doing his duty. Other male slaves were much less fortunate, especially those sent to labour in mines where the treatment was harsh and the work often dangerous. Thus, for the most part, the way slaves were regarded depended not on their sex but on their function. Nurses (female) were held in high regard as was sometimes the paidagogos (male, tutor and child-minder for a young boy). Perhaps the most famous example of the latter is Sicinnus, the paidagogos of Themistocles' children who was entrusted with delivering a false message to the Persians at Salamis.

Athens vs. other city states

As already noted, our knowledge of slavery outside of Athens is mostly limited. This is true even for Sparta:

It has been doubted whether Sparta had any slaves at all other than helots...But there is some evidence...

Even the evidence we have is contradictory on, for example, numbers of slaves in Sparta compared to Athens. It is not unlikely that there were some slaves who performed duties similar to domestic ones in Athens and elsewhere, but we don't know for sure.

This passage from Xenophon strongly implies one difference between slaves in Athens and those in some other states:

Slaves and metics are allowed the greatest licence at Athens, and you are not allowed to strike any of them there, nor will a slave stand aside for you. Why this is the local custom, I will tell you: if it were the law that a slave or metic or freedman could be struck by a free man, you would often hit an Athenian thinking that he were a slave; for the people there are no better dressed than slaves and metics, nor is their appearance any better.

We can also make a comparison on laws concerning slaves thanks to the survival of parts of the Gortyn Code in Crete. From this we know, for example, that fines were used as a means of punishment in Crete whereas in Athens flogging was common. 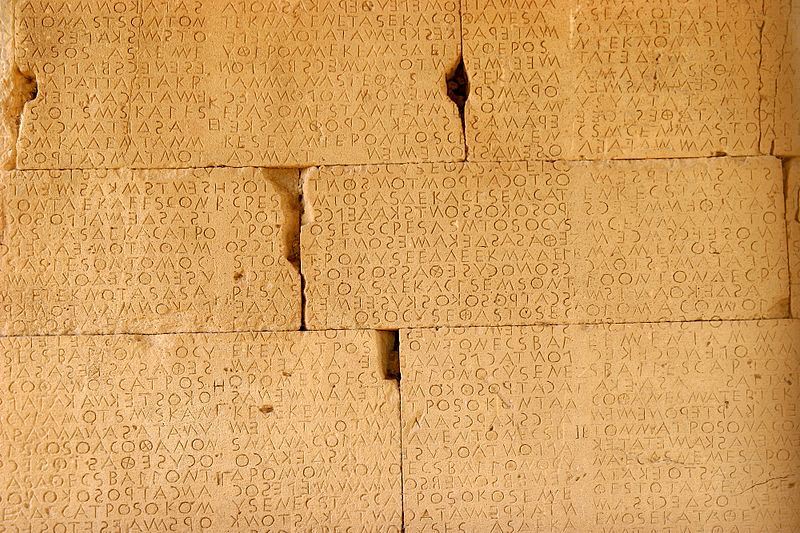 For the most part, though, we can only assume in the absence of evidence that many aspects of slavery were the same or at least similar in most city states. Household slaves usually worked under the supervision of the wife of the owner and often became almost part of the family. Some female slaves became close and trusted confidants of their mistresses, as witnessed by funerary monuments. Others, though, were exploited sexually and many of these became concubines of their owners. Least fortunate were those used as prostitutes in brothels, for which there is evidence of in Corinth as well as Athens.

Prices depended not just on sex but also on where slaves came from, their age and their accomplishments. Slaves who appeared to be non-submissive would fetch a lower price. That said, the average price for a female slave was higher than that of a male slave according to Gustave Glotz in Ancient Greece at Work. Dillon and Garland cite the following example of a sale of slaves at auction:

One important source on manumissions is inscriptions. Unfortunately, many inscriptions do not indicate the sex of the slave but, of those that do, a substantial number were women. R. Zelnick-Abramovitz, in Not Wholly Free, cites many examples of such inscriptions from many different sites in Greece.

In addition to inscriptions (perhaps most notably the one in Crete pictured above), sources include Aristotle, Plato, Demosthenes, Thucydides, Plutarch, playwrights such as Aristophon and Euripides. Greek vases also show many of the tasks that slaves performed (as a quick search on google images shows).

The focus of sources tends to be either on slaves in general or on the jobs that slaves performed; with the latter in mind, it is usually evident which sex is being referred to. Thus, in most cases, indicating male / female wouldn't have been considered necessary by the authors of the various written sources.

Edward M. Harris, Democracy and the Rule of Law in Classical Athens

Not the answer you're looking for? Browse other questions tagged slavery sources women classical-greece athens or ask your own question.

8
In Studying the peoples of pre-Roman Britain, what are our primary reference sources?
5
What are the oldest primary sources of recorded history in China?
32
Is it true that there are more slaves in the world now than ever at one point in history?
13
What were the ethnic backgrounds of the slaves in Ancient Greece?
23
What prevented slaves in Classical Greece from running off?
1
What are canonical sources about fifth century BCE Athens?
7
In Classical Athens, what did the portico of the archon basileus look like?
5
Are there any Ancient Greek texts showing concern for the fate of their slaves?