What was the earliest knitted sweater?

So, I've been doing some research on knitting, and I became curious as to what was the earliest recorded knitted jumper/sweater?

As far as I can tell there's no particular technological barrier to creating one - you just need wool, needles, the skill and time. Arguably they're just as warm, but significantly more practical than a cloak.

So, the some of the earliest records of knitting are from the 11th century, but there's another form of needle-and-thread weaving called Nalebinding which has been around for thousands of years apparently. It only uses a single needle, and smaller sections of thread, but produces results extremely similar to knitting and crochet.

Various knitted caps have been around for centuries, as well as socks and gloves. But I'm specifically interested in any references to something that resembles a modern jumper/sweater.

These garments are probably less old than expected.

Additionally the terminology for these garments changes quite untimely, retaining specialised or even archaic terms for a time while at the same time changing their meaning completely.

Academic historians have been discouraged from writing about hand knitting for several reasons. Hand knitting has relatively little to show in museum collections; books about it are in the main either journalistic or amateur; the domesticity of the craft has reduced its attractiveness to historians; and there is no outline of the subject to which monograph studies can be related.[…]

Words for 'knitting'
Just as there is no ancient Greek word for knitting, so there never has been an accurate Latin word for it, not even in mediaeval and Renaissance times. Even in the sixteenth century, when knitting was widespread in western Europe, the saintly cardinal-archbishop of Milan, Carlo Borromeo (1538-84), in his Latin regulations on ecclesiastical dress used contextus, 'interwoven', to describe the fabric ofbishops' gloves. He had no accurate Latin word for 'knitted', so he was driven to use a slightly unusual word meaning 'woven'. Poinsinet de Sivry, noticing that elsewhere Pliny speaks of a spider's web as scutulatum, quite illogically deduced that the word meant 'knitted', gave himselfcredit for discovering the Latin word for 'knitting' and demanded that Latin dictionaries should be revised accordingly.
The dictionaries were never revised. Poinsinet de Sivry was wrong. Scutulum means a little shield or plate, usually square, perhaps lozenge-shaped. A pattern of little squares or patches, or a chequered pattern, was described as scutulatum. Pliny used the same word to describe an ornamental pavement; other writers use it to describe the colour of certain horses, as well as of clothes. When applied to a spider's web it refers to the quadrangular spaces between the threads of the web. Pliny's reference to Gaul probably indicates a primitive Celtic check or tartan. There is no justification for Poinsinet de Sivry's guess that Pliny knew about knitting.

Some words with dates that seem to indicate the emergence of a certain style:

GUERNSEY 1832 Guernsey frock; 1835 guernsey shirt; 1836 guernsey. A jumper usually worn by a seaman, so called from its knitted fabric, also called 'guernsey' since the 16th century.

JUMPER 18th century: short closed coat with sleeves. Dr Johnson equated it with 'waistcoat'. 1853 for sport and travel. US: a woman's pinafore dress.

PULLOVER 1921. A casual jersey or sweater, usually with sleeves. The sleeveless form appeared in 1919 and became popular in the early 1930s, but the word was in common use for the sleeved form until the 1950s.

SWEATER 1882. A jumper, jersey or gansey. Earlier used in plural for whole suit of clothes. Used for women's jerseys in US before 1896. Knitter's circular and monthly record December 1896.

And the oldest picture available to me from something knitted that resembles a jumper: 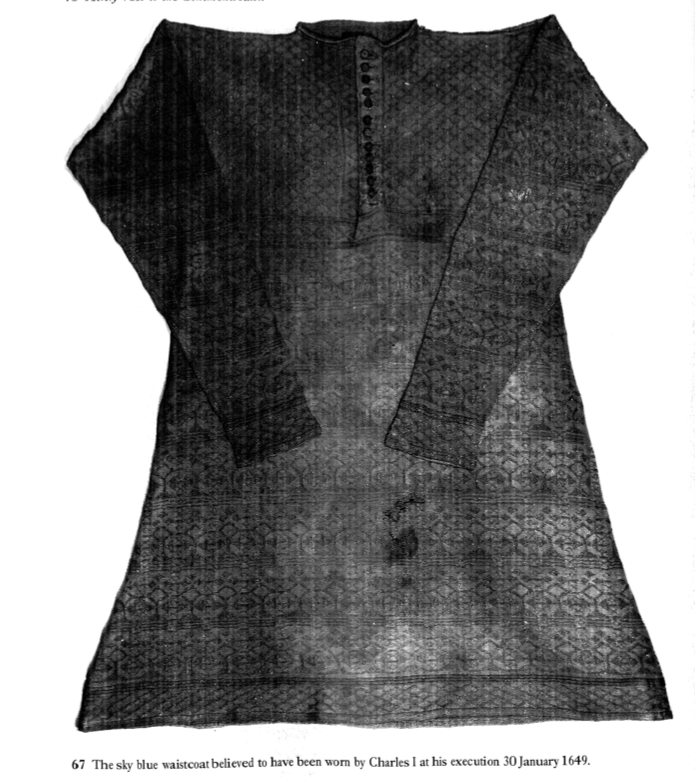 The sky blue waistcoat believed to have been worn by Charles I at his execution 30 January 1649. The most important of the other garments made were the frocks, or 'jackets', which today we should probably call jerseys or jumpers. Hartley and Ingilby quote letters of 1830 and 1831 which mention the frocks, especially 'spotted frocks'. Apparently none have survived but it is clear that the patterns were of the 'midge-and-fly' variety that would have approximated to the tradition of Cumberland weaving with black and white to produce an optical grey

The earliest printed reference to a fisherman's jersey has been found by Mary Wright in a newspaper report of the Cornwall Lammas Assizes of 1858 when William Walsh, aged 20, was sentenced for the theft of clothing; including a guernsey-frock, from James Carter of Illogan. Mrs Wright also shows that Richard Poppleton of Wakefield was spinning '01/2 worsted', such as was used for jerseys, as early as 1846. Cromer Museum possesses a fine print of Cromer church by John Buckler, dated 1847, which shows three fishermen wearing what may well be knitted jerseys. They are tiny figures, 15 mm (1,12 in.) high, that clearly show the baggy trousers called slops, and stocking-caps. Their upper garments are not definitively clear, but they cling to the chest like jerseys and they are certainly not jackets.[…] Garments for the upper body had been knitted since Elizabethan times. We are woefully lacking in detailed information about the 'waistcoats' of those days and the provenance of the beautiful seventeenth-century shirts that have survived. They were knitted in the round, with a damask pattern of plain and purl stitches, and in these points resemble the fisherman's jersey. They were underclothes, knitted shirts like the nattrejer of Denmark, a similar type of garment that dates from at least the late seventeenth century. In such garments, surely, we must look for the ancestry of the fisherman's jersey.

Not the answer you're looking for? Browse other questions tagged clothing or ask your own question.

23
What is the history of the popped collar?
9
Was there any time in non-recent history where it was fashionable to wear ripped clothes?
10
What were the insignia of the Western Roman Empire and what happened to them?
4
What was clothing in ancient Palmyra like?
25
Why were so many of the earliest banks founded by cloth merchants?