What statuses did Black Africans have in the court and royal family of Emperor Frederick II of Hohenstaufen and do their descendants survive? [closed]

Ask Question
Asked 2 years, 4 months ago
Active 1 year, 5 months ago
Viewed 530 times
-6
Closed. This question needs to be more focused. It is not currently accepting answers.

What positions and statuses did Black Africans hold in Germany in the court culture of Emperor Frederick II of Hohenstaufen and later courts?

According to Germany and the Black Diaspora: Points of Contact, 1250-1914 by Mischa Honeck, Martin Klimke and Anne Kuhlmann

From the very emergence of modern national historiography, European historical memory has excluded or marginalized peoples of different ethnocultural, religious, and other groupings in past European societies.¹ Black Africans were part of these societies, but only now have they become a topic of general interest. Owing to the work of pioneering black European studies authors like Hans Werner Debrunner, Allison Blakely, Peter Martin, and others,² black Africans and their descendants have now been attested in various, and not always marginal, positions in northern, central, and eastern Europe: as seamen, missionaries, musicians, servants, members of guilds, and in lower social positions...

For centuries black Africans were a distinctive part of European court culture. Early evidence of their presence can be found in the cosmopolitan court of Frederick II of Hohenstaufen (1194–1250), the German king, Roman emperor (from 1220), and successor of the Norman kings in Sicily. His court, a center of intellectual exchange in his time, shows black Africans in an array of positions that would later recur in Renaissance and Baroque court culture.

In Hitler's black victims : the historical experiences of Afro-Germans, European Blacks, Africans, and African Americans in the Nazi era by Clarence Lusane

The racial merging of "white" with being European has little historical (or contemporary) merit. More than a few scholars have identified the presence of peoples from every continent, including Africa, on European soil dating back to antiquity. Of course, this includes the territory that eventually became Germany. An enduring symbol of this diverse habitation is that the oldest skull found in Europe, discovered in Dusseldorf in 1856, was African. Individual Africans appeared in the area dating back to the days of Julius Ceasar, and groups of Africans have settled in the region since at least the twelfth century. During their 800-year occupation of southern Europe, the Moors came to Germany from northern Africa during the Middle Ages and a number of them began to achieve prominent positions as poets, scholas, philosophers, religious leaders, and even part of the royal family. While the black German Roman Catholic patron saint, Saint Maurice, is of African descent and well known, there are numerous religious-oriented statues of Blacks that can be found around the country. As the historian Gustav Jahoda notes, "In the thirteenth century German emperor Frederick II of Hohenstaufen had Blacks guarding his treasures".

The presence of Black individuals is also evident in the art of Europe, see the video Friday Focus—Cranach's Saint Maurice and the Representation of Africans in Sixteenth-Century German Art by Paul Kaplan, Professor of Art History, Purchase College, State University of New York presented in conjunction with Cranach's Saint Maurice at the Metropolitan Museum of Art 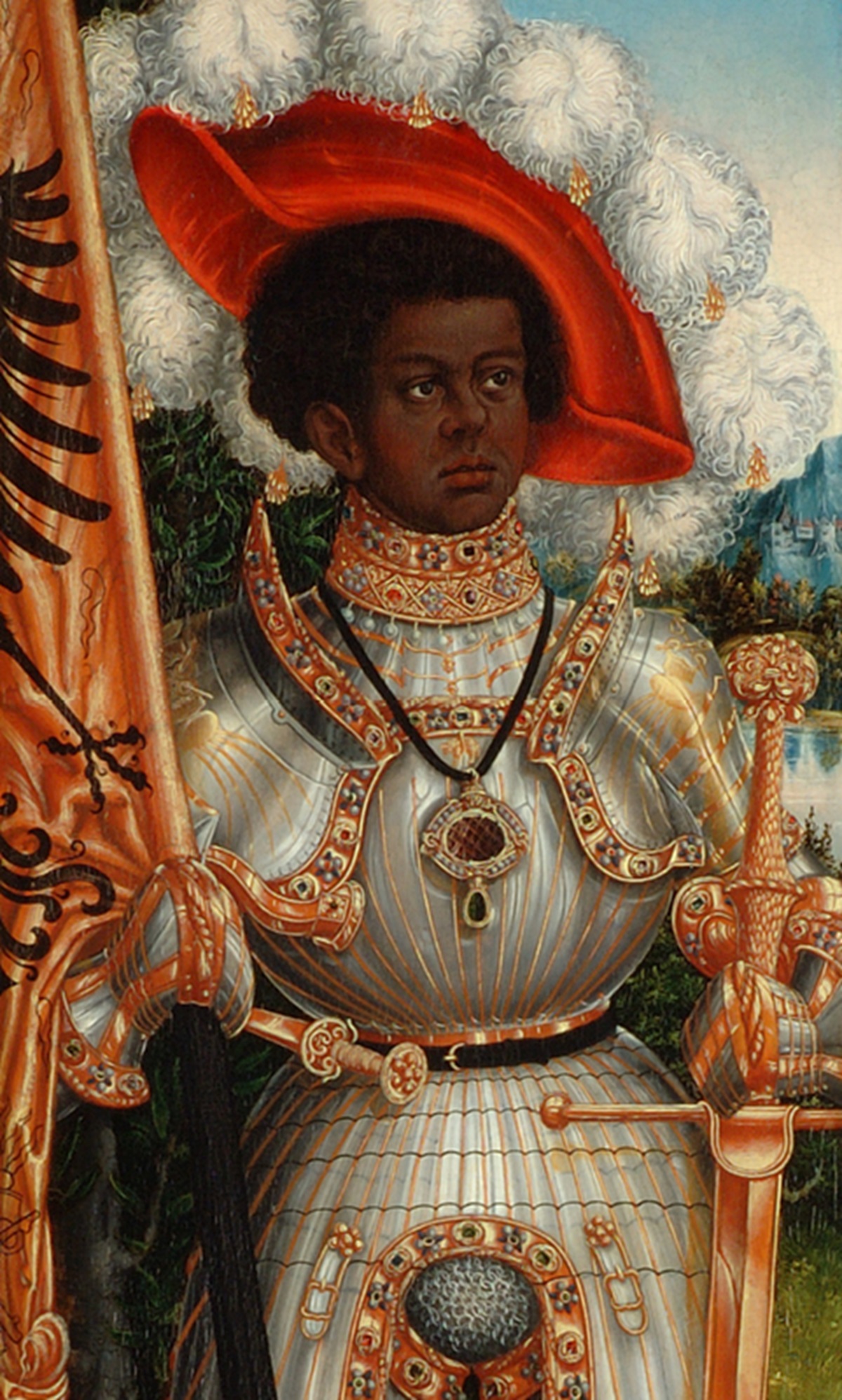 We are aware of the irrefutable evidence (see Was Queen Sophie Charlotte black?) of the Black ancestry of the royal Queen Sophia Charlotte of Mecklenburg-Strelitz (Portugal; England), who was born in the Holy Roman Empire; 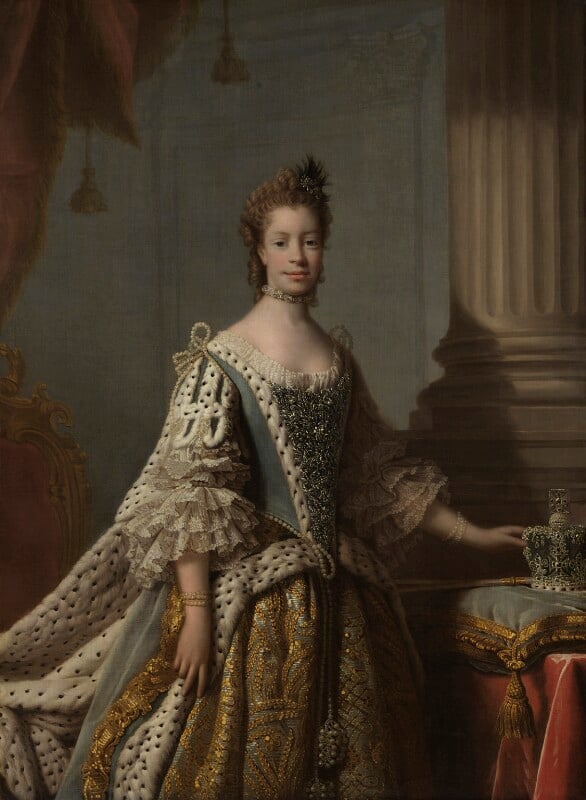 What evidence do we have of "prominent positions" that Blacks achieved in the royal family of Germany during and after the reign of Frederick II of Hohenstaufen?

In any large population there are likely to be a small proportion of people with highly exotic ancestry, being descended from people who lived far away a relatively short number of generations earlier.

The largely uninhabited Sahara desert was a great barrier between north Africa and Sub-Saharan Africa where more or less "black" people come from. And there is a great variety among Sub-Saharan Africans. If I remember correctly, the Khoikhoi or Hottentots may be more different from other human groups than any other two human groups might be from each other.

But of course the Sahara was not a perfect barrier for travel. There was occasional travel by ship to west Africa, and by ship to east Africa. People could travel along the Nile from north Africa to Sub-Saharan Africa and vice versa. And there would have been some travel across the Sahara from one side to the other, even in ancient times.

Saint Maurice supposedly was the leader of the Theban Legion and martyred by Maximian who reigned 286 to 305. It is likely that if St. Maurice existed he would have looked more like an Egyptian than like a "black" African.

Emperor Frederick II definitely employed Sicilian Muslims; After a Muslim revolt he moved many Muslims from Sicily to the city of Lucera in southern Italy. And it is possible that Frederick II employed "black" Africans from south of the Sahara. Frederick spent most of his reign in Italy but did visit Germany several times.

As for the possibly biracial ancestry of Queen Sophia Charlotte, she had a number of siblings. Possibly she inherited more "black" genes from her two parents than any of her siblings did. But who would both of her parents inherit "black" genes from?

Alessandro de'Medici (1510-1537) Duke of Florence, had two illegitimate children. Alessandro was called "the Moor" because of his dark looks, and his mother may have been a servant woman of African descent. Alessandro has descendants to this day, but I don't know of any among the mostly German protestant ancestors of Queen Sophie Charlotte.

Wikipedia says that it has been suggested that Sophia Charlotte could have inherited "black" traits from Madragana, a possibly black mistress of King Alfonso III of Portugal, 15 generations earlier.

Anyway, according to Medieval Lands, the mistress of King Alfonso III who was the ancestress of the Sousas had a Christian name, not a Muslim name. So I don't know what to think about that. http://fmg.ac/Projects/MedLands/PORTUGAL.htm#MartimAffonsoSousaChicorrodied1299A3

Not the answer you're looking for? Browse other questions tagged germany royalty holy-roman-empire black-history or ask your own question.

11
What goods did Germany trade during the Weimar Republic, and with whom?
8
Why did Empress Elizabeth and Catherine the Great of Russia have such different policies toward Frederick the Great?
6
How did Andreas Baader and Ulrike Meinhof end up on the list of prisoners to be released, by Black September?
11
What effect did awareness of devastating bombing at home have on the fighting spirit of German troops on the Eastern front?
13
Why are most monarchies in Europe of German descent?
6
How did the German royal families lose power so quickly in 1918? What happened to them afterwards?
14
Did the founding members of the Black Panthers ever mention the role of Malcolm X in creating their group?
11
Why have “classical” given names (seemingly) had greater persistence in American black culture?
1
What was the fate of the planters and their plantations following the American Civil War?