Which version of Napoleon's "Europe is a Molehill" quote is correct?

Regarding Napoleon's Molehill quote, the version I have always heard is:

Europe is a molehill. It has never had any great empires, like those of the Orient, numbering six hundred million souls.

I got Napoleon: A Life by Andrew Roberts yesterday (And so far, I find it much better than any other publication I have read on the man). Roberts' version of the quote is:

For Napoleon it (Order to invade Egypt) represented an opportunity to follow in the footsteps of both his greatest heroes, Alexander the Great and Julius Caesar, and he did not rule out the possibility of using Egypt as a stepping-stone to India. ‘Europe is but a molehill,’ a delighted Napoleon told his private secretary, ‘all the great reputations have come from Asia.’

With further research, There appear to be two other versions.

Europe is a molehill. We must go to the orient; all glory has always been acquired there. (Frederick Quinn)

and the more credible, given that it is written by a known associate of Napoleon, who presumably was the man Napoleon made the comment in question to,

Europe is a molehill. There have never been great Empires or revolutions except in the East where there are 600,000,000 men. (Louis Fauvelet de Bourrienne in his Memoirs of Napoleon)

So which version is correct? If it's the former, then was it really in the context of Directory allowing Napoleon to invade Egypt? If it's the latter, then why did Napoleon describe Europe as a molehill if he was just talking about a chance to gain a reputation to be compared with the likes of Alexander or Julius Caeser? Personally I feel if anyone is accurate, it has to be de Bourrienne but Roberts begins his book by criticising all pre-existing books and memoirs including de Bourrienne's so there we are.

To summarise what I am looking for is:

Your last quote from Bourrienne seems to be the most correct version. Essentially, the context is that Napoleon held a very high opinion of the East and wanted to organize expeditions at least as far as India. The quote seems to have been said before his expedition to Egypt, and was likely in reference to further eastward expeditions.

Edit: See Pieter Geerkens answer for the original memoir in French. The version I have below appears pretty true to the original, but the original is certainly the better source.

This version of Bourrienne's memoirs from 1901 is the oldest version I've been able to find, and provides a version of the quote similar to your last one on page 60:

At Passeriano, seeing the term of his labors in Europe approach, he first turned his serious attention eastward. There, during long evening walks in the magnificent park, this subject formed a no less interesting than inexhaustible theme of discourse with his favorite generals, aides-de-camp, and myself. "Europe," he would exclaim, "is but a mole-hill: there never have existed mighty empires, there never have occurred great revolutions, save in the East, where, 600,000, 000 of people live, where the cradle of all religions is, the birthplace of all philosophies!" Monge was almost always present at these conversations. That learned man, ardent in mind and heart, falling in with these opinions, excited yet higher enthusiasm in the bold spirit and lively fancy of our General. We all joined in chorus.

Furthermore, he was clearly interested in an expedition to India after he was finished solidifying his control over Egypt, which itself was an expedition mainly of his own design:

Doubtless, the project of the colonization of Egypt was not new—it had been proposed to Louis XV. by the Duke de Choiseuil; but the design had slumbered along with so many others, in the forgetfulness of dusty parchments. revival is entirely due to Bonaparte... A short time before our departure, I asked how long he intended to remain in the East? "A few months, or six years," was the reply; "all depends upon events. I shall colonize the country, and take out artists, workmen of all descriptions, women, actors. We are only twenty-nine; we must be thirty-five. These six years will suffice me, if things succeed, to reach India. Tell all those who talk of your departure that you are going to Brest. Say the same to your own family." I did so.

To expand on the answer by Giter, here is the original French of de Bourrienne's retelling of that passage (V 2, pp 44) from an 1829 French edition in the NY Public Library: 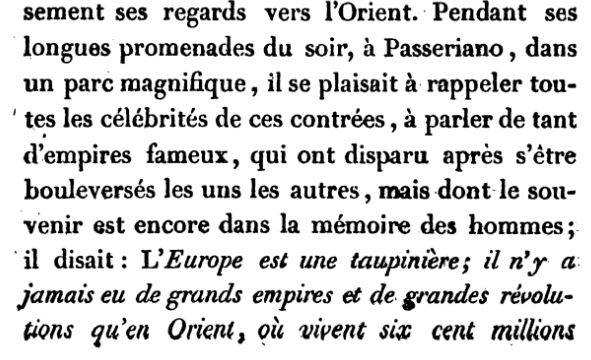