Marcus Aurelius wrote the famous book of philosophy Meditations while on campaign in Pannonia. The writing was personal and intended for his eyes and reflections for he himself to meditate on and was not intended for others (see paragraph 3, and references 1 and 2 on the same page)

With that said who was the first individual or individuals to pass around or publish Meditations as we know Marcus himself did not publish it and had no intention of others seeing his writing? How did it make its way from his private collection into the world at large?

We don't know how Meditations was originally preserved for posterity. The introduction to the Loeb edition (eds. Capps, Page and Rouse) mentions Marcus Aurelius' son-in-law and general Pompeianus, and the emperor's life-long friend Victorinus as individuals who might have 'rescued' the manuscript after Marcus' death in 180 AD. It was also known to the emperor Gordian I (died 238 AD) who was a young man when Marcus died. After this,

The first direct mention of the work is about 350 A.D. in the Orations of the pagan philosopher Themistius, who speaks of the παραγγέλματα (precepts) of Marcus. Then for 550 years we lose sight of the book entirely, until, about 900, the compiler of the dictionary, which goes by the name of Suidas, reveals the existence of a MS of it by making some thirty quotations, taken from books I, III, IV, V, IX, and XI. He calls the book (συγγραφή) an "αγωγή (a directing) of his own life by Marcus the Emperor in twelve books." About the same time Arethas, a Cappadocian bishop, writing to his metropolitan, speaks of the scarcity of this μεγλωφελέστατον βιβλίον, and apparently sends him a copy of it.

The Wikipedia entry on Arethas expands on the bishop's role in preserving Meditations:

Arethas admits to holding the work in high regard in letters to the Byzantine emperor Leo VI the Wise and in his comments to Lucian and Dio Chrysostom'. Arethas is credited with reintroducing the Meditations to public discourse.

Nothing more is heard or seen of Marcus' work until about 1150 AD when Tzetzes, a grammarian of Constantinople quotes it. Then,

About 150 years later (1300 A.D.) the ecclesiastical historian, Nicephorus Callistus (iii. 31) writes that Marcus "composed a book of instruction for his son, full of universal... experience and wisdom." About this very time Planudes, a monk of Constantinople, may have been engaged in compiling the anthology of extracts from various authors, including Marcus and Aelian, which has come down to us in twenty-five or more MSS dating from the fourteenth to the sixteenth century. They are practically of no help in re-establishing the text, and contain in all forty-four extracts from books IV.-XII.

Our present text is based almost entirely upon two MSS, the Codex Palatinus (P) first printed in 1558 by Xylander but now lost, which contains the whole work, and the Codex Vaticanus 1 950 (A) from which about forty-two lines have dropped out by accidental omissions here and there.

According to P. A. Brunt in Marcus Aurelius in His Meditations, Wilhelm Xylander's was the first printed edition (the date given here is 1559). Xylander's source was apparently a codex provided to him by the alchemist, doctor and poet Michael Toxites; this source was lost sometime before 1568. 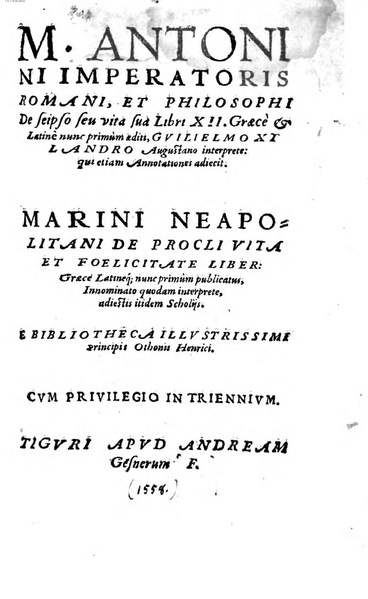 The first English translation was by Meric Casaubon, an French-English classical scholar, published in 1634.

9
Who proposed the motion that gave Gaius Julius Caesar the title Augustus?
5
Was Marcus Marcellus faced with Viridomarus or Britomartus?
2
Who were these two conspirators against Titus?
8
What policies governed freedom of speech under Marcus Aurelius?
6
What was Marcus Aurelius's view of and interactions with Christianity?
11
Did Marcus Aurelius ever deliberate about his son's succession?
6
What was the medium for Marcus Aurelius's Meditations?
1
Who was a Roman General for a short time?
2
Who was the first woman to be made a god by Rome's senate?