When did Northern India and N. China begin to dominate in global demographics?

This simple video says that there were 170 million people in the world at the beginning of the current era. Each dot represents a million people -there are about 170 dots on the map- and over 120 of them are in Northern China and India. The video portrays about 70% of the world's population residing in these two regions, so it can be assumed that the majority of the people resided in these regions. There was nowhere else like these until Europe around 1500 A.D. When did Northeast India and NE China begin to dominate in global demographics?

Northern India and Northern China are both very fertile places that would support a large population of farmers or hunters. This was probably a good starting point, but population density triggers societal advancements that increase the population more. I think that it would be this snowball effect at some point in history that created the concentration of population portrayed in the video.

Discussions on global population usually start around 1 A.D. The consolidation of China and Rome at this time created useable census records. Earlier statistics just aren't there, making the discussion theoretical, and estimates varying often by 200%. There are some older census records in China, such as from the Zhou dynasty (c. 900 B.C.), that can't be reliably used.

Pieter Geerkens had a good answer. He said that rice has a caloric advantage over other types of grains, and that the the Ganges river system is the one of the largest, most fertile places. The user Rahul had a good point; that the development of river systems facilitated social development. Still these are all partial answers, and I'd like to bring up some other points.

The date that Pieter Geerkens gives for the adoption of rice cultivation in India is about 2000 B.C. There are issues with considering this as a starting point. This period of history in North India is called the Late Harrapan phase; it is characterized by the collapse of the Indus Valley Civilization, and a shift to more rural society. Regardless of the character of society, though, both the IVC and the Late Harrapan cultures were located in the Indus River system, not the Ganges river system, which was the region of great density shown in the video. The Indus Valley is shown with a more typical density like that of the Mediterranean. Being that it was the region of the previous Indus Valley Civilization, it seems like it would be the site of the greatest population in North India at the time. This picture of Late Harrapan archaeological sites shows the regions associated with it, as well as other archaeological sites in North India in non-bold text. 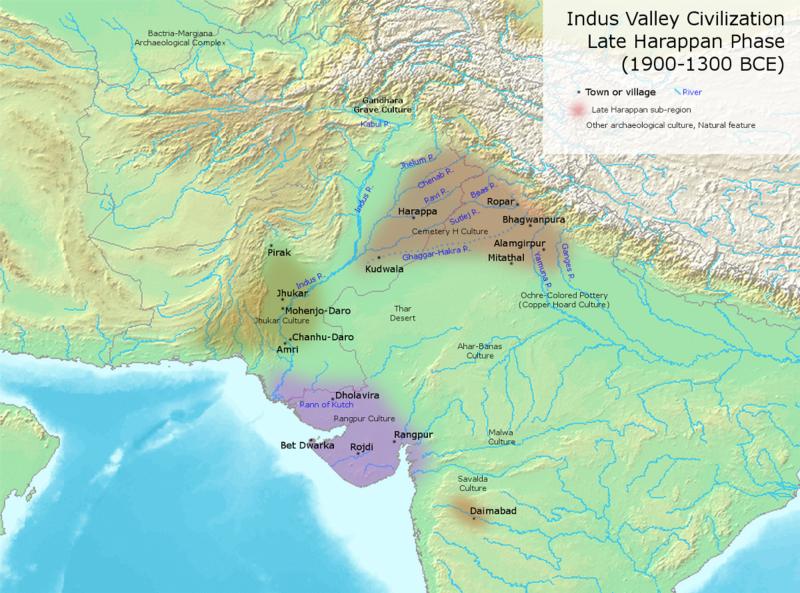 Due to this black hole of easily available information, I'm inclined to think that the Indo-Aryans were the ones who developed the Ganges River system. Vedic culture was initially focused in Northwest India, and moved into the Western Ganges river system around 1200-1000 (Painted Greyware). Some time after 800, the development of the iron plow revolutionized agriculture in North India.

Around 600 B.C., urban centers sprung up as a result of increased river based commerce. This is Adam Smith's explanation, as provided here in the answer by Rahul.

I know nothing about Ancient China. What is called the Warring States (475-225 B.C.) period did produce a lot of cultural works, so it may be mischaracterization of the period, economically and socially.

Using the delta areas as proxies for the entire river valley systems:

It is clear that, for comparable technology, the supportable population in the Ganges area is:

Clearly the Ganges river system is going to dominate human population statistics until other things are no longer equal.

So as you are asking when the domination began, I would say that occurswhen wet-rice cultivation (developed in China ~ 6,000 BP) reaches Northern India about 4,000 BP.

Adam Smith in Wealth of Nations, talks about the development of inland navigation systems along great rivers as one of the major causes of economic and demographic growth in ancient Egypt, China and India.

Of all the countries on the coast of the Mediterranean sea, Egypt seems to have been the first in which either agriculture or manufactures were cultivated and improved to any considerable degree. Upper Egypt extends itself nowhere above a few miles from the Nile; and in Lower Egypt, that great river breaks itself into many different canals, which, with the assistance of a little art, seem to have afforded a communication by water-carriage, not only between all the great towns, but between all the considerable villages, and even to many farm-houses in the country, nearly in the same manner as the Rhine and the Maese do in Holland at present. The extent and easiness of this inland navigation was probably one of the principal causes of the early improvement of Egypt.

The improvements in agriculture and manufactures seem likewise to have been of very great antiquity in the provinces of Bengal, in the East Indies, and in some of the eastern provinces of China. In Bengal, the Ganges, and several other great rivers, form a great number of navigable canals, in the same manner as the Nile does in Egypt. In the eastern provinces of China, too, several great rivers form, by their different branches, a multitude of canals, and, by communicating with one another, afford an inland navigation much more extensive than that either of the Nile or the Ganges, or, perhaps, than both of them put together. It is remarkable, that neither the ancient Egyptians, nor the Indians, nor the Chinese, encouraged foreign commerce, but seem all to have derived their great opulence from this inland navigation.

He then goes on to compare them to Africa, Russia and parts of Europe and attributes the lack of development in these regions to the absence of inland navigation systems.

All the inland parts of Africa, and all that part of Asia which lies any considerable way north of the Euxine [Black] and Caspian seas, the ancient Scythia [North of the Black Sea, part of present-day Southern Ukraine], the modern Tartary [modern Kazhakstan] and Siberia [all of Russia] seem in all ages of the world to have been in the same barbarous and uncivilised state in which we find them at present. The Sea of Tartary is the frozen ocean which admits of no navigation, and though some of the greatest rivers in the world run through that country, they are at too great a distance from one another to carry commerce and communication through the greater part of it. There are in Africa none of those great inlets, such as the Baltic and Adriatic seas in Europe, the Mediterranean and Euxine seas in both Europe and Asia, and the gulfs of Arabia, Persia, India, Bengal, and Siam, in Asia, to carry maritime commerce into the interior parts of that great continent: and the great rivers of Africa are at too great a distance from one another to give occasion to any considerable inland navigation.

The navigation of the Danube is of very little use to the different states of Bavaria, Austria and Hungary, in comparison of what it would be if any of them possessed the whole of its course till it falls into the Black Sea.

Not the answer you're looking for? Browse other questions tagged ancient-history economy ancient-china demography population or ask your own question.

4
Why do China and India have such huge populations?

27
When and why did war chariots stop being used?
29
When did the Hebrews stop speaking Hebrew and start speaking Aramaic?
5
When and why China started to make a difference in the superpower arena?
19
Why was gold so popular and valuable back when it did not have many real world uses?
4
What were Albert Speer's specialties, and how did he apply them when he led Organisation Todt?
28
Why were there no agricultural, city-state forming civilizations in the Ice Age?