How did the ancestors of proto-Malagasy in South Borneo reach Madagascar?

The Malagasy, the original inhabitants of Madagascar, are of both African and Asian ancestry. Both linguistic and genetic evidence point to an Indonesian origin of the Asian ancestors, specifically the island of Borneo. For example,

Among the 10 potential ancestral populations in Island Southeast Asia and Oceania that we sampled, the Borneo populations had Y-chromosomal haplogroup distributions that were the most similar to those observed among the Malagasy. This observation is in striking agreement with the linguistic evidence that the Malagasy language is most closely related to the Maanyan language from the Barito River Valley in southern Borneo.

However, I have not been able to find reliable information on how settlers from Borneo would have reached Madagascar. Wikipedia merely states:

Traditionally, archaeologists have estimated that the earliest settlers arrived in successive waves throughout the period between 350 BC and 550 AD, while others are cautious about dates earlier than 250 AD. [...] Early settlers arrived in outrigger canoes from southern Borneo. [citation needed]

The great-circle distance between southeast Borneo and Madagascar appears to be about 5500 miles, of which about 5000 miles are open sea after leaving the Indonesian archipelago, with very few islands (Christmas Island, Cocos Islands, Mauritius, and Reunion) along this most direct route. A map of prevailing winds indicates that they are favorable for a sea voyage from Borneo to Madagascar. Data I found on the performance of Polynesian outrigger canoes indicates a top speed of about 20 knots (~23 miles/hour):

Geoffrey Irwin and Richard G. J. Flay, "Pacific Colonisation and Canoe Performance: Experiments in the Science of Sailing", The Journal of the Polynesian Society, 124.4 (2015): 419. (online)

Assuming a more likely average speed of 10 knots, this would suggest that the minimum travel time on the most direct route would have been about three weeks. While this makes the direct route appear unlikely to me, it is still somewhat plausible. I am not aware of evidence that any outrigger canoes that may have been available to the settlers of Madagascar would have had performance characteristics similar to those of (more modern?) Polynesian canoes, or that their navigational skills matched the highly-developed skills of Polynesians seafarers (as evidenced by the Marshall Island stick charts, for example).

A plausible alternative, a longer indirect route from Borneo to Madagascar, would presumably touch on Southern India, the Arabian peninsula, and East Africa, using trade routes that existed in antiquity, and possibly utilize trading vessels in use at the time, rather than outrigger canoes.

A pioneering study was published in 1951 by Otto Christian Dahl proposing a close genetic link between Malagasy of Madagascar and Ma'anyan of Borneo.

Using linguistics, in particular the "Barito and Dayak languages of South Kalimantan", academicians have identified ancestors of Madagascar as "Indonesian". Let's be careful here.

Borneo is Asia's largest island, so to be more precise, let's narrow it down to Barito River of Borneo. Today, this is in Kalimantan, Indonesia. Malaysia's Sabah and Sarawak is on the northern side of Borneo. The nation-states of Indonesia and Malaysia is a 20th century creation.

I have seen at least one academic identify the ancestors of Proto-Malagasy as "Indonesian". Although the reference was to Sulawesi, Indonesia, it is confusing and misleading. During pre-colonial times, there was no political border in Borneo and the indigenous people of Borneo is an eclectic mix of many tribal groups. It should simply be: speakers of South-east Barito group, of South Borneo. (Even today, the political border of Malaysia-Indonesia in Borneo is still porous). 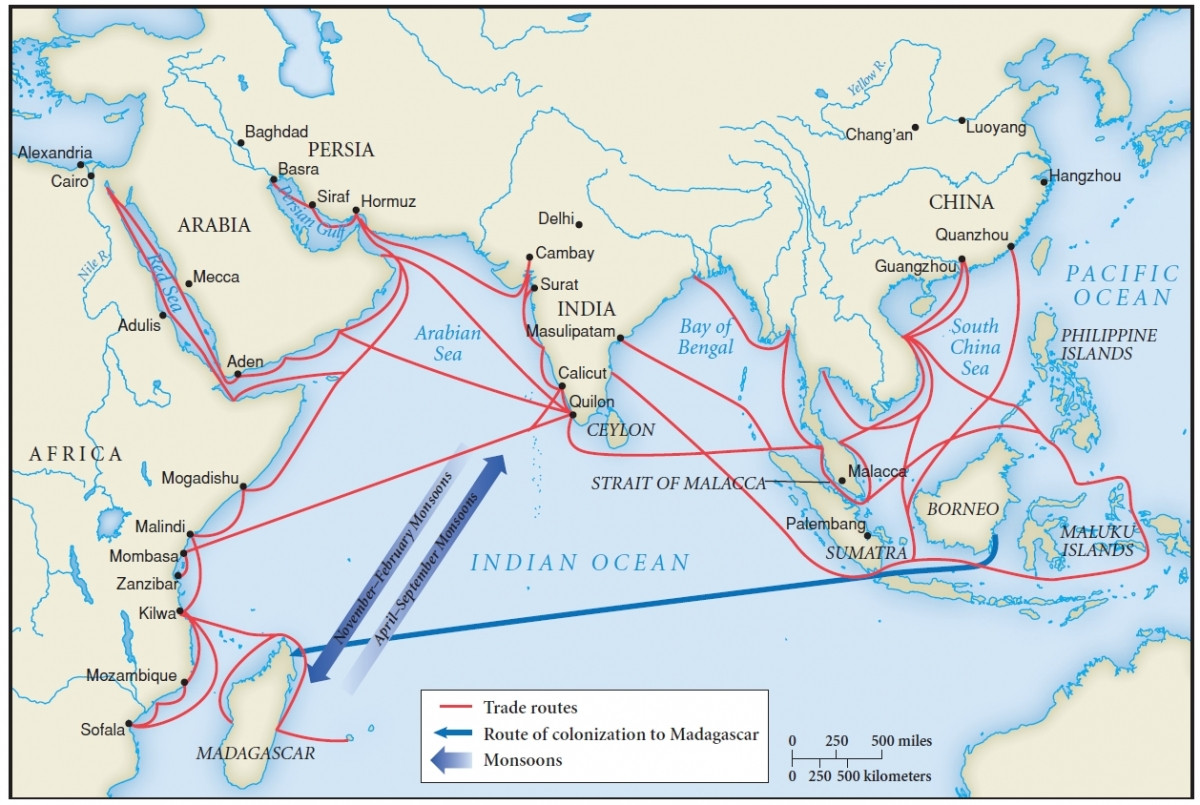 In fact, it does not have to be directly from south Borneo. The migration could have been anywhere from Maritime Southeast Asia (not necessarily directly from south Borneo). The trade routes of Southeast Asia and India, then Madagascar, is more realistic (practical?) than a straight voyage directly to Madagascar. The Malay sailors (more below) would have taken advantage of the Southwest-Northeast monsoon (see map).

On the linguistic front, in addition to Barito language, Malagasy culture and language has loanwords from old Malay, Javanese and Sulawesi and even Sanskrit. Most pertinent:

Source: The Indonesian migrations to Madagascar: Making sense of the multidisciplinary evidence, 2006, p.7.

Recent articles have stated that ships plying the pre-colonial trade routes were mainly operated by Malay traders -- keeping in mind that political borders were different during 1st to 12 century CE. So, in short, the migratory routes of Austronesian language and culture was most probably from any major port on western side of Maritime South East Asia (not just south Borneo).

... another theory proposing that links between southeast Asia and east Africa were primarily established by Malays who were the agents behind the migrations of Southeast Barito speakers to Madagascar. ... This theory supports the fact that neither the Southeast Barito Dayaks nor the Malagasy have ever developed the seafaring skills required for the ambitious voyages that their ancestors made, while the Malays have.

I am not aware of evidence that any outrigger canoes that may have been available to the settlers of Madagascar would have had performance characteristics similar to those of (more modern?) Polynesian canoes, or that their navigational skills matched the highly-developed skills of Polynesians seafarers (as evidenced by the Marshall Island stick charts, for example).

These ships were not "outrigger canoes", they really were capable of long-distance voyages. Image below "A ship under full sail, panel no. 86, Borobudur": 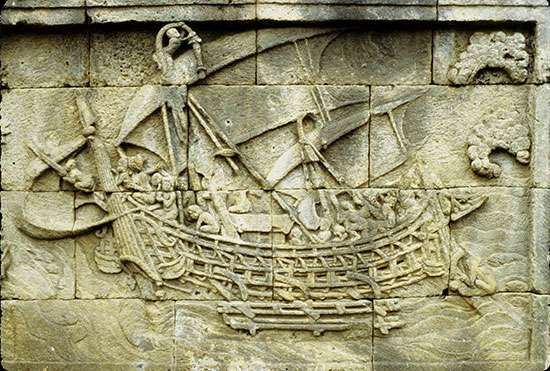 It is understandable why the romantic image of Malay or Austronesian canoeist from ISEA has persisted (emphasis mine):

Once lip service was paid to the remarkable maritime adaptations and sailing talents of Southeast Asian people, the issue attracted little additional attention. Many pages were devoted to the distribution of such features as outriggers (single or double) and sail types from Southeast Asia into Oceania and, via India, to Eastern Africa and Madagascar, but cultural diffusionists were content to discuss the origins of such features without consideration for the historical context of Southeast Asia. The unsuspecting scholar was therefore largely left with the romantic but unsubstantiated idea that fearless Austronesian-speaking people had paddled halfway around the planet on flimsy boats. Given this obsessive focus on origins and diffusion, with no consideration to the full historical processes, it was difficult to figure out why and how the Austronesian speakers, who had first spread into insular Southeast Asia and the Pacific, subsequently leaped west across the Indian Ocean, reached East Africa, and peopled Madagascar.

Only recently has the evidence emerged, from past few decades:

For a long time, historians restricted their role to examination of regional peddling trade carried out in small ships. Research on ships and trade networks in the past few decades, however, has returned considerable agency to local societies, particularly to Austronesian speakers of insular Southeast Asia, from proto-historic to early modern times. As far in the past as two thousand years ago, following locally developed shipbuilding technologies and navigational practices, they built large and sophisticated ships that plied South China Sea and Indian Ocean routes, as documented by 1st-millennium Chinese and later Portuguese sources and now confirmed by nautical archaeology. Textual sources also confirm that local shipmasters played a prominent part in locally and internationally run trade networks, which firmly places their operations into the mainstream of Asian global maritime history.

From Wikipedia on History of Madagascar (emphasis mine):

The Southeast Asian origin of the first Malagasy people explains certain features common among the Malagasy, for instance, the epicanthic fold common among all Malagasy whether coastal or highlands, whether pale, dark or copper skinned. This original population (vahoaka ntaolo) can be called the "Proto-Malagasy" . They are the source of:

Finally, on Indian Ocean trade voyages during Southeast Asian maritime history, in addition to book and article cited above, this is also useful on shipbuilding and the "technical" side: The Southeast Asian Ship: An Historical Approach, 1980. To end, I don't have a written source but it is generally accepted (my own opinion) the Indian Ocean voyages, if well planned, can be conducted in a week (each direction).

Incidentally, I answered a previous question on diaspora of Austronesians from southeast China region, and Taiwan, into Island Southeast Asia.

Not the answer you're looking for? Browse other questions tagged africa immigration south-east-asia madagascar or ask your own question.

5
Were the ancestors of Malays originally from Yunnan, China?

20
What were the demographics and economics of South-East Asian islands around year 1400?
3
How did the US vet Soviet refugees for possible spies/infiltrators?
8
Impact of the spread of disease from non-Europeans to virgin populations in the Old World
1
What animals did South East Asians ride in the Middle Ages?
12
How did US anti-Irish sentiment decline?
13
What was the staple food of the natives of South East Asia before rice?
71
Why Were Madagascar and New Zealand Discovered So Late?