What was the Hundred Years' War called at the time?

Similar to this question — What was the Seven Years War called at first? — but for yet a different war.

According to Wikipedia, the Hundred Years' War is divided by historians into three smaller "phases" (the Edwardian, Caroline, and Lancastrian phases); but these names are also neologisms. What did people back then call the war(s) they were fighting?

And once the fighting actually had been going on for a hundred years or so, did they generally start calling it the Hundred Years' War, or when did that name show up in the historical record?

The Hundred Years War has become the established name for the Anglo-French conflicts that happened between 1337 and 1453. Although the designation does not refer to an actual event—the term was first used in France in the early 19th century — it usefully emphasizes the insoluble nature of the hostilities.

Noted 19th century French historian Jules Michelet's Precis de l'histoire de France (1833) uses 'la guerre de cent ans', but also refers to the war as 'la guerre des Anglais'. He divides the war into two periods, 1328 to 1380 and 1380 to 1453, 1380 being the year the French crown passed from Charles V to his 12-year-old son Charles VI. Michelet's Histoire de France was translated into English in 1847 by G. H. Smith but it does use the term Hundred Years War. However, the 1882 edition (also Smith) uses a hundred years of war.

Among English historians, William Longman in The history of the life and times of Edward the Third (1869) comes close with "a war, which never entirely ceased for a hundred years." Longman also used 'the French war'. A few years later, in A Short History of the English People (first published in 1874), John Richard Green used 'The Hundred Years' War'. This appears to be the first use in English.

The most important chronicler of the first 'half' of the war was Jean Froissart who covered the years 1326 to 1400. In his prologue, he refers to the conflict thus:

Often, though, Froissart just uses 'the wars'. Other chroniclers used similar phrases, but it's important to note that their chronicles cover several wars. For example Jean de Wavrin, whose work goes up to 1471, mentions 'wars in France, England and Burgundy'; Jean Le Bel whose chronicle was heavily borrowed from by Froissart, usually just mentions 'the war' or 'the war between _____ and _____'.

Written about 100 years after the end of the war during the Tudor period, the 1555 edition of Anglica Historia by Polydore Vergil, one of several historians who has been called 'The Father of English History', uses phrases such as 'the war in France', 'the war against the King of France' and 'the great war in France'. Two hundred years later, the Scottish historian David Hume's History Of England, vol. 2 (published in 1762) used similar phrases (e.g. the war with France).

The complexity of the conflicts of the latter part of the war (1400 to 1440) is well-reflected in one of the title pages of mid 1800s English translations of Enguerrand de Monstrelet's Chronicle. 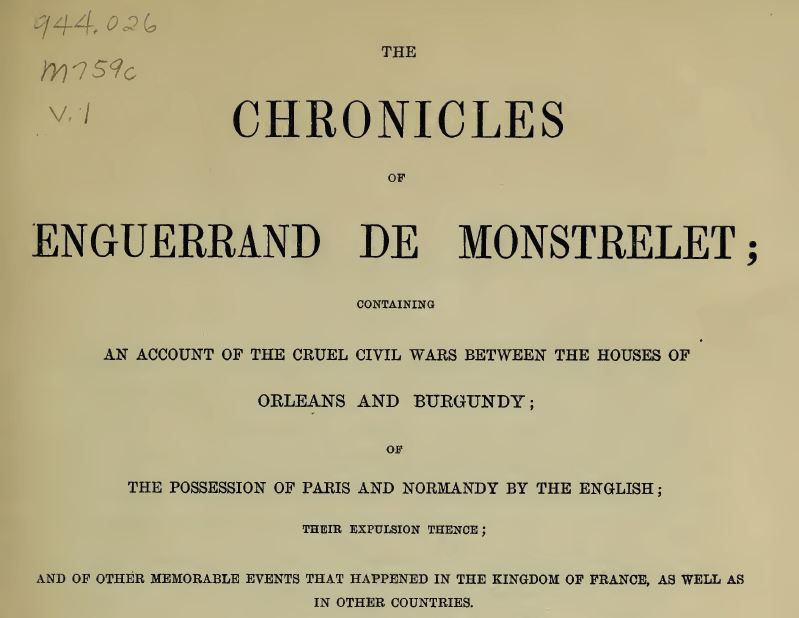 The Medieval ages, and in turn the 100 years war, was a politically a different beast than war as we are used to it in the modern era. During both world wars we see a declaration by majors powers declaring that a state of war now exists between countries and their belligerent allies. This is how the world at large waged war and is the common way that we think about it today. Such a system of honorable warfare, if it can be called that, didn't exist during the medieval ages.

The Hundred Years war itself is a combination of battles, wars, and technical rebellions against the French monarchs. Unlike the Seven Years war in which many belligerents had many goals for which they could name the war at the time the hundred years war was carried out by several different people in order to carry out the same goal, to win the French throne.

Now to answer your question:
Instead of being known as different names the English and French who fought during this conflict actually would have known the war by the many battles that occurred during the "wars" duration. Declaring a formal war was not always a part of Medieval diplomacy and as such many times the kings of England would not even bother declaring a formal war, instead using their de Jure claim to restart periodic invasions. As such the English and French would have likely remembered key battles rather than naming the actual conflict itself.

For a conclusive list of the battles that the English and French would have referred to click here. Additionally if you read the original Hundred Years war Wikipedia entry the war didn't have a formal conclusion, king Edward merely sold off his right to the French throne in the Treaty of Picquigny thus ending the cause of hostilities between the two countries that had existed for a century. To summarize, their is no formal alternative name used for the Hundred Years War by either the English or French. Instead the war would have been referenced by the many battles fought by the English pretenders for their right to the French throne.

27
What was the Seven Years War called at first?