Why did the Romans only name some months and number others?

There's a lot of sources on the internet which are happy to tell you that the Roman year originally had 10 months (Martius, Aprilis, Maius, Junius, Quintilis, Sextilis, September, October, November, December) and provide more-or-less authoritative derivations for those names.

However, nothing I've found explains why four (later six) months were named for gods (mostly) and six were simply numbered. Do we have any explanation for what happened to Quartilis, Tresember, Duober, or Unilis? (pardon the butchery)

Related, why are some of the numbered months -ber and some -ilis? Is this just Roman grammar, or is there some other reason?

Note that the four godly months were full months of 31 days, with the remainder hollow and only 30 days. Why question are frequently impossible to answer, with reasons lost long past in antiquity. We are left to surmise that the naming scheme was chosen to reflect the length difference.

Yes, the stylistic differences are the result of the two forms being of different declension.

Here is a representative declension of the Latin noun September: 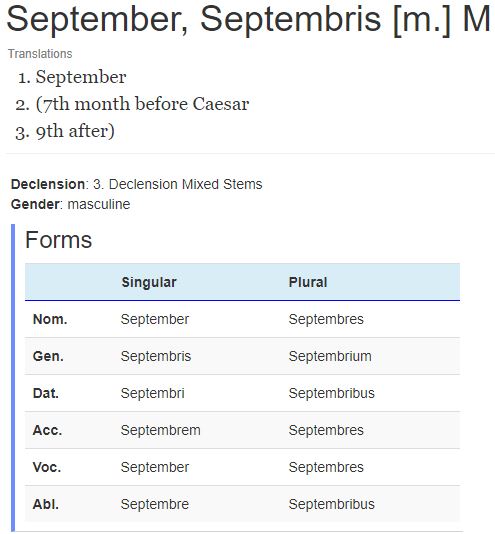 and for comparison Junius: 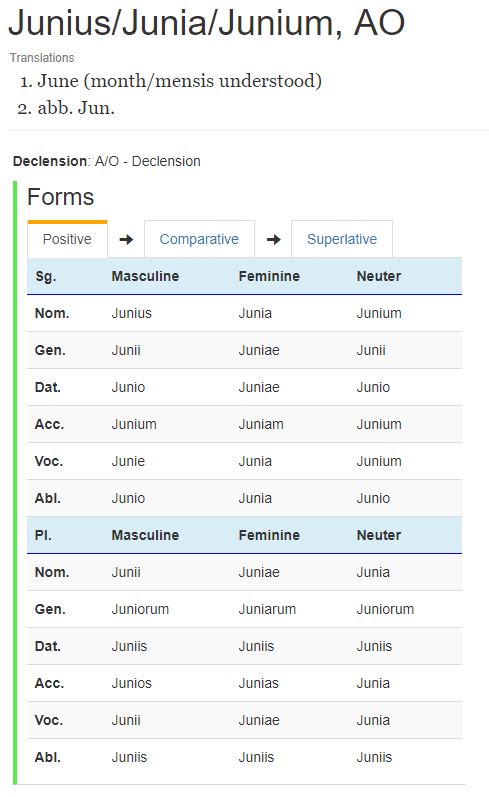 For the uninitiated, a short primer on Latin noun declensions with English equivalents:

I couldn't find the source but once I read that the five gods naming the months were the most important gods in the Ancient Roman religion, before it received Celtic and Greek influences:

So the four main aspects: father, mother, love and agriculture. Without marriages and children, a society don't last.

January was named for Janus, an Old God akin to Chaos.

January was named after Janus, a sky-god who was ancient even at the time of Rome’s founding. Ovid quoted Janus as saying "The ancients called me chaos, for a being from of old am I." After describing the world’s creation, he again quoted Janus: "It was then that I, till that time a mere ball, a shapeless lump, assumed the face and members of a god." http://www.webexhibits.org/calendars/calendar-roman.html

And February was probably named because it was the last month of the year and its name meant "purification", so they could expiate before starting the new year.

17
How did the Romans discover dry cleaning?
11
Why did the start of the Roman consular year move?
23
What was the Julian Calendar aligned to?
47
Why did Greeks and Romans dilute their wine?
11
Why did Emperor Nero kill his mother and others?
9
Why does English use Roman months, but Germanic days of the week?
1
How did they number the months when the year started on March 25th?
10
Did Greeks and Romans tolerate those who only worshipped some of their gods?
12
Why did the ancient Romans use groups of eight?