Was the act of servicemen exchanging their weapons for enemy weapons common during WWII?

I have often heard that soldiers (particularly Allied soldiers) would swap their weapons for enemy weapons during World War II. Allies would take German weapons, like the MP40, that were seen as a step up from some of their weaponry. Unfortunately, I cannot recall where I have heard these rumors from.

Are the rumors of soldiers swapping their weapon for enemy weapons true? This quora post answers some questions about the logistics behind why swapping weapons is poor. As well, replies to this reddit post point towards soldiers collecting souvenirs and armies procuring large quantities of weapons to be re-chambered and distributed. My question is specifically about the exchanging of weapons for "better" enemy weapons.

I can understand soldiers on the front line taking whatever weapons are available to them if theirs suffered a catastrophic malfunction or ran out of ammunition. However, this poses difficulties when resupplying, given the drastic differences in ammunition types between armies. Even if they did manage to obtain ammunition, once they're removed from the front lines would they even be allowed to retain the weapon? I would imagine that they may even be reprimanded for losing their service weapon.

It did happen sometimes, and not only out of personal initiative of the soldiers but as a concentrated effort by the armies.

It mostly happened in the Eastern Front, were the Germans captured great quantities of Soviet materiel (and not only personal weapons), to the point that it became practical to give them to their own troops. Additionally, "second rate" materiel was given to the Axis allies, who lacked industrial capacity and were always starving for weapons.

In fact the Germans even had a standard way to rename the weapons; weapons of Russian origin would have a (r) in the name, Polish ones would have a (p), (f) stood for French...

Sometimes the weapons would be modified to adapt them to the ammunition of the receiving army, sometimes they would be passed to the troops "as is".

And it would not end with personal weapons. In particular, the Germans seem to have been very fond of captured Russian artillery, like the 7.62 cm Pak 36(r), which was a conversion of several different Russian models.

And of course, the tanks: 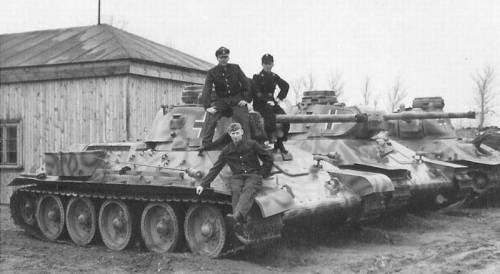 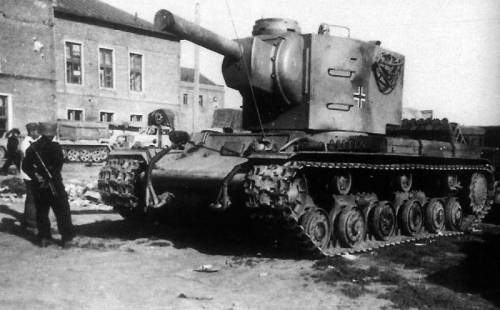 Another problem with using enemy weapons in combat was sound - Soldiers would get used to the sound of each weapon, and if they didn't know better (think fog of war) would shoot in that direction assuming enemy troops were there as well.

Did some looking around and found some examples of where sound was important:

Souvenirs mostly and alternatively used secondary weapons perhaps. Problem was American ammunition didn't fit German guns which were at that time metric and unless you could somehow convince the German army to supply you generally American troops didn't have the capacity to carry enough America ammo to negate resupply much less significant secondary German ammo.

Having said this an exception might be the Marines and Japanese soldiers in the Pacific. At Guadalcanal the marines fought without resupply for three months and relied on Japanese supplies including guns and ammo. According to John B George's Shots Fired in Anger, the Japanese used Dutch German and British arms in that battle. Japanese used Dutch Mannlichers, British Enfields and German Mausers and Krags on Guadalcanal.

Having said all this I've seen several German Lugers which were were valued souvenirs during WWII, I even saw a German Mauser infantry rifle which at the time I saw it the former American Army Air Corps, bomber crewmen, rear gunner who had traded for it explained to me how superior it was to the US army's M1.

9
What was the argument for the Japanese pursuing the Northern Expansion Doctrine during WWII?
38
Were well-connected Germans able to park their sons in Norway during WWII?
5
What was the standard pistol used in Yugoslavia during WWII?
13
Where did the French revolutionists get their weapons?
21
Where did Japan get their oil during WWII?
21
What was the tactical benefit of using flamethrowers as weapons?
6
Why was Turkey neutral during WWII?
2
How common was training with swords and other weapons at Newton's time in England?
17
Why didn't the steppe bow spread further?
7
Was throwing hammers as weapons common during European medieval combat?