How historically accurate was the Queen's trip to Ghana portrayed in Episode 8 of The Crown?

OK let me be more specific. In episode 8 of The Crown (Netflix), it is implied that Queen Elizabeth II went to Ghana (because she heard a sly comment from JFK's wife) to prevent the country from going into the arms of the USSR despite the warning of her PM. It is portrayed in the show that the Queen pulled off a diplomatic victory for the west by dancing with PM Kwame Nkrumah of Ghana.

First, I don't fully comprehend the significant of the dance and why her PM was shocked. And second, did the event happen like the show illustrates? I know that she did dance with Nkrumah, but was it in the context shown on the show?

In several respects, it is at best misleading. Ghanaian leader Kwame Nkrumah's primary interests lay in Pan-Africanism and promoting the continent's freedom, independence and unity. He never had any intention of aligning himself with either the Eastern bloc or the West; rather, he sought to play them off against each other to the benefit of his own country.

While Queen Elizabeth II's visit was important in that it helped to cement cordial relations between Britain and Ghana and keep the latter in the (then British) Commonwealth, securing American co-financing of the Volta River Project shortly after the visit was of far greater importance in limiting Nkrumah's reliance on Soviet aid at the time.

Thus, as the Queen's dance with Nkrumah in November 1961 was just one event during an 11-day visit, it was of little significance on its own. Nor does there appear to be any evidence of the Prime Minister, Harold Macmillan, being 'shocked' at the dance. On the contrary, he was very satisfied at the overall success of the royal visit. Further, the suggestion that the Queen went to Ghana because of a comment by Jacqueline Kennedy is pure fiction.

Kwame Nkrumah was, above all else, a Pan-Africanist. From before the time he attained power in 1957 up until his death in 1972, Nkrumah's writings and speeches consistently promoted the cause of Pan-Africanism. Thus, although he was impressed by some aspects of the Soviet Union, Nkrumah's intention was always for Africa to control its own destiny rather than become a satellite of the either of the superpowers.

Nkrumah was greatly influenced by the Pan-Africanist George Padmore. As stated by Ahmad Rahman in The Regime Change of Kwame Nkrumah,

Nkrumah could not be a true nationalist or a Pan-Africanist if he did not put Africaâ€™s interests before those of the Soviet Union or any power outside Africa. He had to be true to his own vision for Africaâ€™s future and not be diverted by the propaganda of Soviet and Chinese Communists. This was Padmoreâ€™s principal lesson. It was one that Nkrumah would never forget.

The 1957 CIA report 'The Outlook for Ghana', cited by Rahman, puts more emphasis on Nkrumah's nationalism and emphasizes his policy of not siding with either the eastern bloc or the west:

Nkrumah was a â€śfanatical nationalistâ€ť who was determined â€śto manipulate all issues â€” including the conflict between the Soviet bloc and the West â€” to the betterment of Ghanaâ€™s position.â€ť

A group of British African experts which has just concluded talks with the Department stressed that Nkrumah is â€śbalancingâ€ť between East and West and despite occasional evidence to the contrary they believe Ghana must be placed in a neutral category and will remain there unless pushed in another direction.

As further evidence of Nkrumah's intent not to align with either superpower, he was a key figure in the non-aligned movement (along with Tito of Yugoslavia, Nehru of India, Sukarno of Indonesia and Nasser of Egypt), attending the Conference of Heads of State or Government of Non-Aligned Countries in 1961. 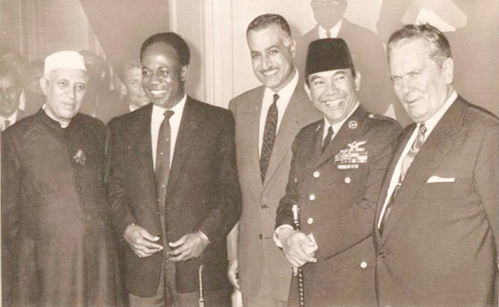 Nonetheless, the Soviets would have been well-positioned to increase their influence had John F. Kennedy not gone ahead with the co-financing of the Volta River Project, the details of which had been hammered out during the Eisenhower administration. The building of a dam to supply the electricity needed for the aluminium industry and to make Ghana self-sufficient (not mention to Nkrumah's grandiose plans for industrialization) was seen as the key to Ghana's future development. The State Department recognized the importance of US co-financing (along with the IDBR and the UK), writing in a memo dated 17 Feb 1961 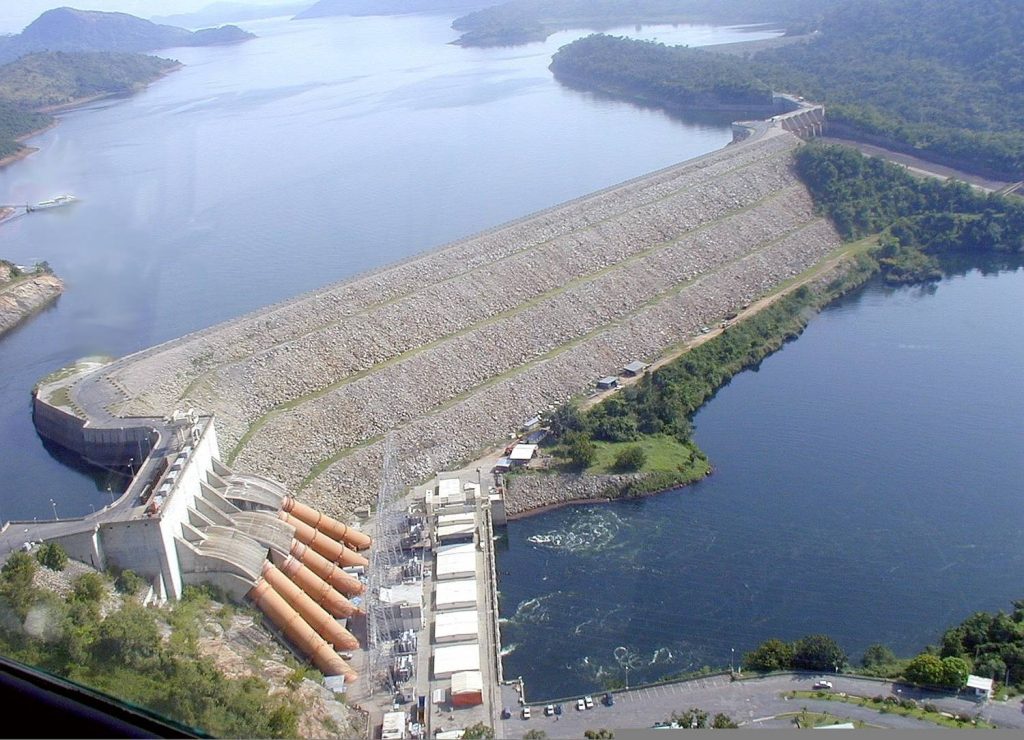 Kennedy, angered by Nkrumah's anti-western rhetoric, held back on rubber-stamping the deal and its confirmation was still pending at the time of the Queen's visit in November 1961. Due to a spate of bombings in the Ghanaian capital Accra, the visit almost didn't go ahead as the House of Commons was against it. Both the Queen and her Prime Minister Harold Macmillan, though, knew it was important for future relations and the visit went ahead.

Although Macmillan believed that the visit was important to maintaining good relations between Ghana and the West, he knew that Kennedy agreeing to the Volta River Project had to follow if Ghana was to not to move closer to the Soviet Union. Thus, after the visit, he told Kennedy:

I have risked my Queen, you must risk your money.

Important though these two events were (the visit and the financing) though, Nkrumah continued to play both sides of the fence and, given his long-held beliefs, this is hardly surprising.

The Netflix version of events may make for good TV drama but it's not very good history (surprise, surprise). This Pathe news report from the time of the visit shows scenes from the evening of the dance (though not the Queen and Nkrumah dancing); the voice-over simply says

The Queen danced with President Nkrumah and thoroughly enjoyed it all. 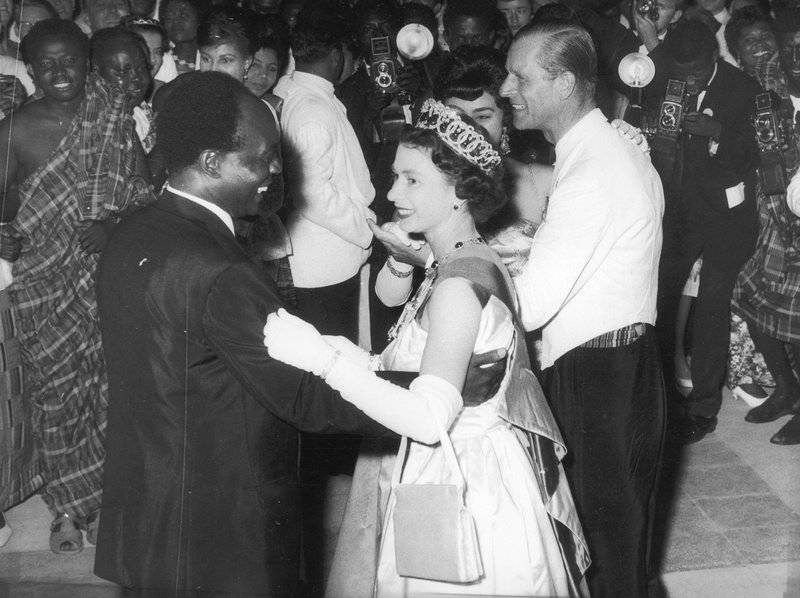 The idea that this dance kept Ghana 'from going into the arms of the USSR' is, in the words of the amateur historian and former Mayor of Accra (capital of Ghana) Nat Nunoo-Amarteifio, "a lot of bulls**t." Nuno-Amarteifio adds,

I'm surprised that the dance has attained this retroactive reputation...Nobody talked about it then.

These views are shared by other experts on Ghanaian history, according to the article 'The Crown' Says One Dance Changed History. The Truth Isn't So Simple. This is not to say, though, the Queen's visit did not create a good impression; it clearly did, but to infer that it was pivotal in influencing Nkrumah's attitude towards the Soviet bloc has no basis in fact.

Nor can I find any evidence that the Prime Minster Harold Macmillan was 'shocked' by the Queen's dance with Nkrumah; this is hardly surprising as it was Macmillan's cabinet that had advised the Queen to carry out the visit in the first place. Also, the Duchess of Kent (Princess Marina of Greece and Denmark), as the Queen's representative, had danced with the Ghanaian leader in 1957.

Finally, the idea that the Elizabeth II's visit to Ghana happened "because she heard a sly comment from JFK's wife" is also a fabrication. The visit had originally been planned for 1959 (see also this Pathe news report), whereas the Queen did not meet the Kennedys until June 1961.

12
How was Sahara desert formed?
11
Is the position of women as portrayed in the Mad Men series historically accurate?
1
What was the first ever televised lottery?
13
How powerful was the Malian empire?
3
Were there commercials in the original broadcast of the moon landings, and how much did they go for?
23
Was the title "Prince of Wales" originally claimed for the English crown prince via a trick?