Who was "The famous American Roberts" in 1920's Europe?

Reading this clip from a German newspaper left me puzzled: 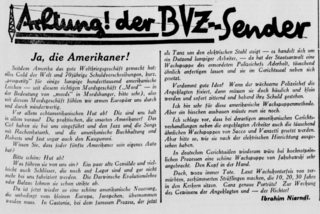 The headline reads "Achtung BVZ-Sender" (an allusion to this newspaper piece being radio-like). The whole piece is a gloss and therefore mostly quite sarcastic and 'critical'.
So it seems that "girl" and "jazz" etc. are negative concepts in this context.
The larger piece above this article might be connected to the opinionated commentary the quote is from. The larger article deals mainly with American and European – that is: international – relations and focusses on financials. ("Are they living beyond their means?") That makes it almost prescient and quite interesting for the context of being published just before the stock market crash of the Great Depression. That whole topic of finance seems to be quite unusual for this paper at the time.

That name is not the rarest and still doesn't ring a bell for me. This person or thing was apparently famous or infamous enough not needing any further explanation for a general German audience in Berlin 1929.

Yet, going through the list of people with the surname Robert or Roberts on Wikipedia (or the list on the German Wikipedia) seems equally unfruitful as googling the Tom, Dick and Harry name.

Who, or maybe what, was Roberts, introduced from America to Germany in the 1920s? What did he do or for what was he known for?

The most probable seems to me that it may refer to an artist, a musician, a cultural concept like a dance? Or going by the slightly dominating large financial theme of the whole newspaper page: some kind of fraud, accounting, credit, borrowing or lending?

This question suffers from a minimal misconception. The person that Roberts refers to is not a surname but a first name. The person was an architect and his full name was Robert Lederer.

He published for example in the journal "Moderne Bauformen 4/1931" about "Robert Lederer u. J. R. Davidson: Zwei Schnellrestaurants in Berlin und Los Angeles" and built such a "modern" and "American" restaurant himself, and named it after himself:

The "Amerikanisches Restaurant Roberts" (apparently it was really named not in German but English: "American Restaurant Roberts") in Berlin in 1928. It was apparently quite famous and almost scandalous in some eyes. It was famous as it was the first of its kind in Berlin and situated very prominently on the Kurfürstendamm: 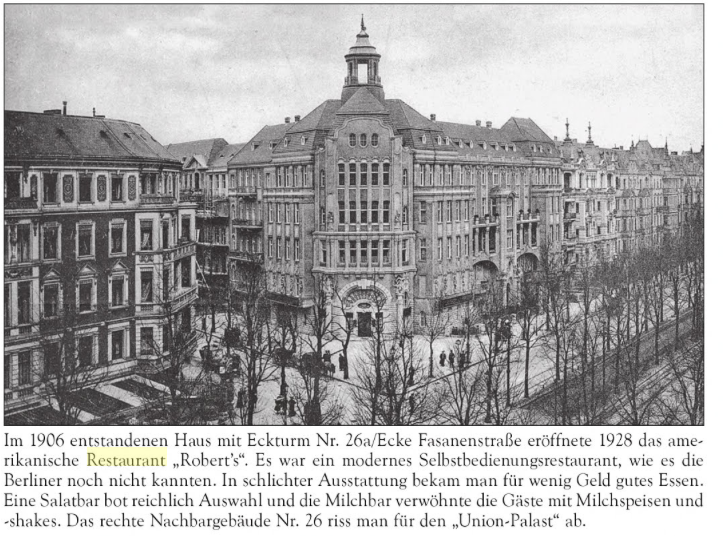 Translation: In 1928 the American restaurant "Robert's" opened in the house built in 1906 (on the corner Fasanenstraße/ Kurfürstendamm No 26a, with corner tower). It was a modern self-service restaurant, the Berliners did not yet know. In simple equipment you could get good food for little money. A salad bar offered ample choices and the milk bar spoiled the guests with milk dishes and shakes.
From Peter-Alexander Bösel: "Der Kurfürstendamm: Berlins Prachtboulevard", Sutton: Erfurt, 2008, p25. Curiously today another restaurant takes the same name to another concept and address, but the old address is now a Starbucks.

The inside of this restaurant was perceived as very American, as was the service and quality of the food. In the terms of the "Silk Lion" Nierndl, this was apparently not good at all: 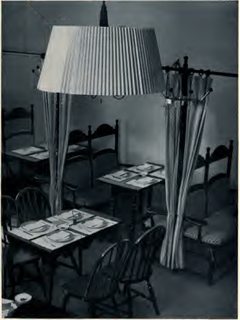 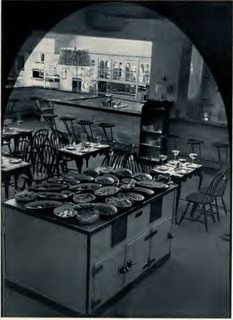 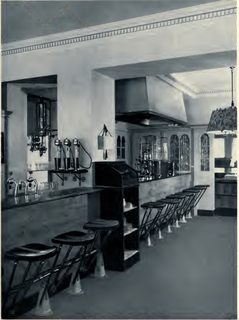 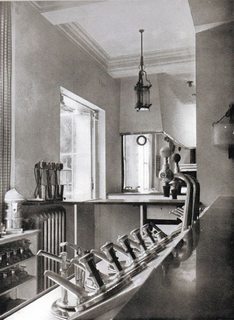 If this book is to attempt to give a cross-section of the current state of artistic design of the modern European restaurant, this motive will be the main directive. The novelty will be expressed not so much in a renewal of the basic ideas of what a modern European restaurant is as in an otherness of technical and decorative means. As is well known, the European restaurant stands in sharp contrast to the American one, which serves only the needs of the hasty businessman. In the short breaks that his professional activity leaves him, he uses these feeding machines in order to be able to leave them as quickly as possible.

The American with his factually sober sense is averse to that sedentary inn atmosphere that mainly lures us Europeans. We demand entertainment, cosiness, demand that first and foremost there is something "going on", as the vulgar expression goes. The European - the Englishman I don't really count - goes "somewhere" in the evening, usually not only because he is hungry or thirsty. He wants to be entertained in some way, seeking a pleasure that for many people already consists of sitting in a restaurant. He wants to break the uniformity of domestic habits, wants variety, one of the strongest needs of modern man, especially the nervous one. […]

Recently, attempts have been made to consciously adopt the American type, just in that form that is the usual one there. Below are some pictures of the restaurant Roberts von Lederer in Berlin at Kurfürstendamm. American tendencies are deliberately adopted here and cleverly Europeanized. The preparation rooms of the meals, almost more important than the catering rooms, are technically up to date and always in view of the visitor.

The whole thing is a funny originality, the city-dweller feels like a globetrotter here, and nothing is currently as popular as America. The whole thing is more of a funny originality, because this kind of restaurant is basically still too foreign to the European. Where are the working men or women who quickly give their stomachs what they need? Where would these kinds of people come from on Kurfürstendamm? So it has become an amusing entertainment for more or less a long time, a fashionable restaurant.

One shouldn't say we want to imitate America, by the way. If we do it pointlessly, we go wrong, but if the rapprochement happens because our entire living conditions become similar, if this international balance also has an effect on the habits of everyday life, then this rapprochement must logically also find its inevitable expression in related forms. And in fact, it is not a one-sided imitation, but an exchange.
— Anonymous: "Moderne Cafés, Restaurants und Vergnügungsstätten, Aussen-und Innenarchitektur: 242 Abbildungen auf 188 Tafeln", Ernst Pollack: Berlin, 1929. On archive.org. Quote from pV–VII. pictures on pages 103–105.

A direct comparison for German audiences: 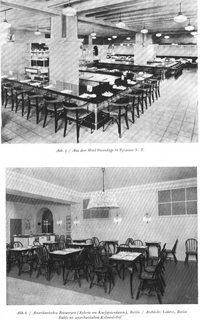 Apart from offering the first ever salad bar in Berlin, this restaurant also had a peculiar way of processing payments:

A note on usage of the Genitive Case (der Genitiv) in the name Roberts: The German genitive case is the case that shows possession and is expressed in English by the possessive "of" or an apostrophe ('s). It is therefore not the plural of Robert (like "many Roberts") but the genitive (like in the restaurant belonging to Robert).

Other candidates to exclude: The most prominent person in Berlin at the time with that name would be the actor Ralph Arthur Roberts, but he has no connection with America. — One part of the duo Tamara and Roberts coming from the Folies Bergère:

Image Source couple were touring Berlin for a short time and were advertised as American comedy eccentrics. But apparently they only performed as a team and only for a short time.

Since Robert Lederer was apparently German, the term Roberts in the question does not refer to any American person but to a restaurant in the American style, symbolising American eating habits and American lifestyle in general.

The fact that this refers to and applies to only one restaurant – albeit famous in Berlin in 1928/29 – makes it likely that Berliners at the time understood this symbolism easily. But this not very likely for the German or even European public at large.

I believe the "Roberts" refers to the "Bob" and/or later Bubikopf haircuts of the time, a short hair cut for women. It was popularized during the Weimar Republic through American actresses like Mary Thurman, Colleen Moore and Louise Brooks in the 1920s. 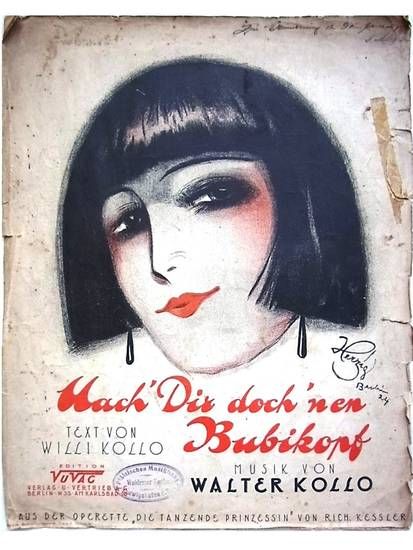 edited from comments:
One reason Roberts likely refers to the Bob haircut is that this part of the article is mocking the influence of American fashion trends in Weimar Germany, same as with using "throat catarrh" to mock American music. In a similar vein, anglicisms are often mocked in contemporary Germany by intentionally mis-translating, mispronouncing or twisting english loanwords (or fake loanwords, like "Handy" for cellphone). Using Robert for Bob would be an intentional mistranslation.
This fits with the mocking (and perhaps scathing) tone of the entire opinion piece towards American cultural and economic influence, while lamenting that little European culture finds its way across the pond to the United States, e.g. a rejection of Darwinism or Balzac.
Because of the german syntax and the verb "einführen", it is unlikely to refer to a person or several persons named Robert or Roberts.

Not the answer you're looking for? Browse other questions tagged germany cultural-history 1920s popular-culture or ask your own question.

8
What is the significance of "Flappers" in American history?
7
Which was the earliest book of names for naming babies?
2
In the 1920's, why did the German government fire working women if their husband was employed?
8
How much did a telephone call cost in the USA around 1920?
8
Was it common practice for men to kiss on the lips in 1920s USA?
10
What is the earliest example of the usage of 'Nazis' to refer clearly and exclusively to the National-Socialists?
13
Where did Otto von Bismarck say "lying awake all night, hating"?
1
What was up with "Alicorn" in the 1920's and 30's
28
Identify the circa 1920 uniform in this photo