What was the tonnage carried in the Triangle Trade?

I'm interested in metrics regarding trans-atlantic trade in the era of the sail.

I've searched but not found any estimates regarding the tonnage of the materials transported. I'm specifically interested in goods, not people (free or enslaved), and the corresponding timespan for those metrics, or per-shipment.

E.g. [x] tons of consumer goods were transported across the northern trade winds per [y] timeframe. or The typical ship in 1649 carried [x] volume of goods, and there were an average of [y] shipments per [z].

Since you are asking for metrics, I'm not going to comment much in my answer and just give you the metrics I found.

From PBS The African Slave Trade and the Middle Passage

From Digital History The Middle Passage

Middle Passage Throughout the height of the Atlantic slave trade (1570–1808), slave ships were normally smaller than traditional cargo ships, with most slave ships weighing between 150 and 250 tons. This equated to about 350 to 450 enslaved Africans on each slave ship, or 1.5 to 2.4 per ton. The English ships of the time normally fell on the larger side of this spectrum and the French on the smaller side. Ships purposely designed to be smaller and more maneuverable were meant to navigate the African coastal rivers into farther inland ports; these ships therefore increased the effects of the slave trade on Africa. Additionally, the ships' sizes increased slightly throughout the 1700s; however the number of enslaved Africans per ship remained the same. This reduction in the ratio of enslaved Africans to ship tonnage was designed to increase the amount of space per person and thus improve the survival chances of everyone on board.

The bolded ratio above allows you to convert ship tonnage to yield estimated cargo. The below tables detail date ranges, ship sorties and ship tonnage for vessels involved in the middle passage.

The following tables come from JSTOR
(You need an account to download but can register and view limited number of articles for free)
Characteristics of British Slaving Vessels, 1698-1775

He has waged cruel war against human nature itself, violating its most sacred rights of life and liberty in the persons of a distant people who never offended him, captivating and carrying them into slavery in another hemisphere or to incur miserable death in their transportation thither. 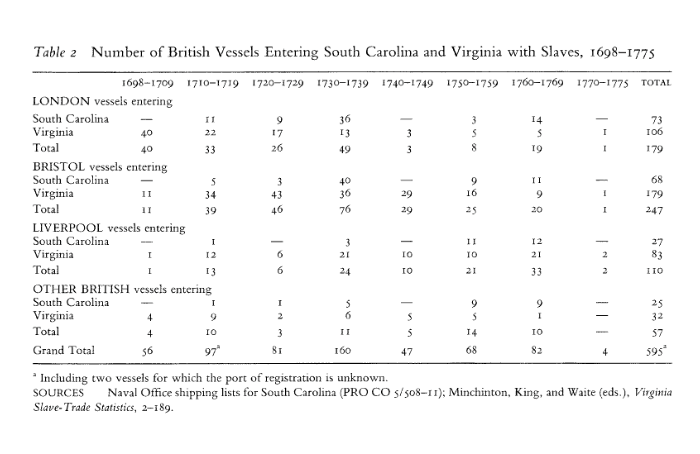 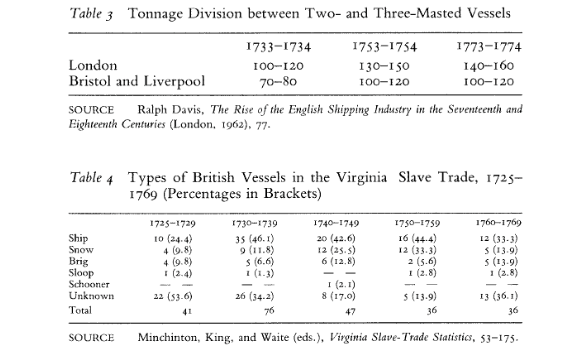 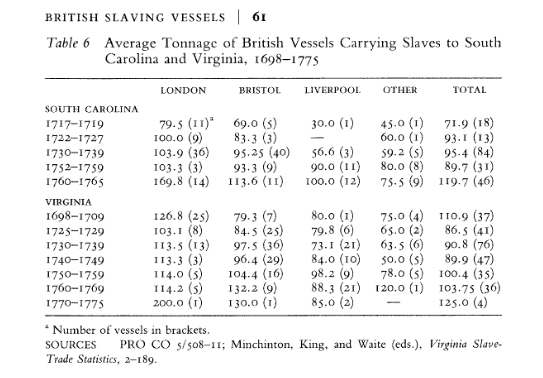 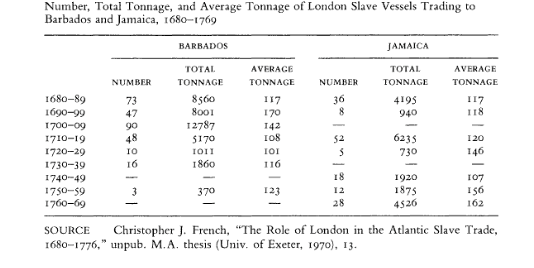 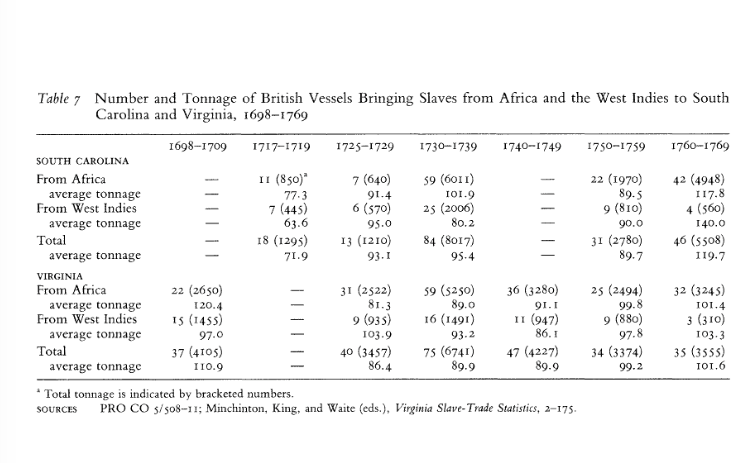 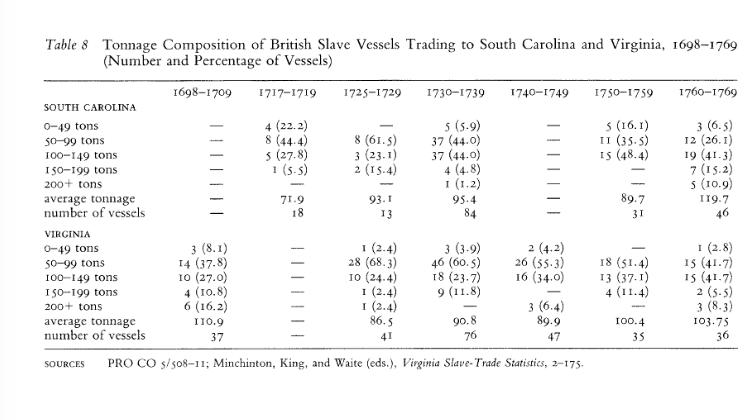 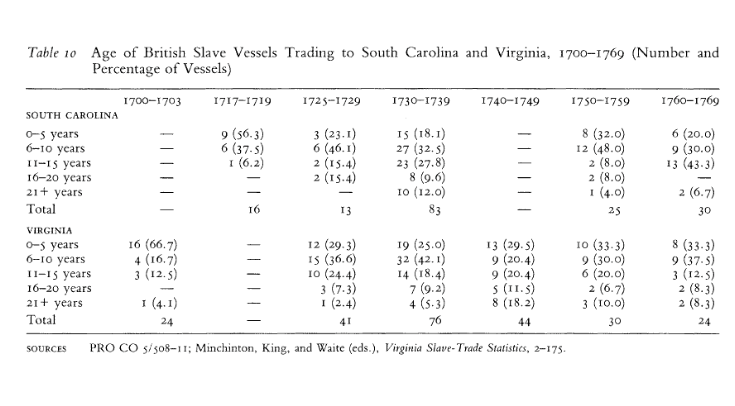 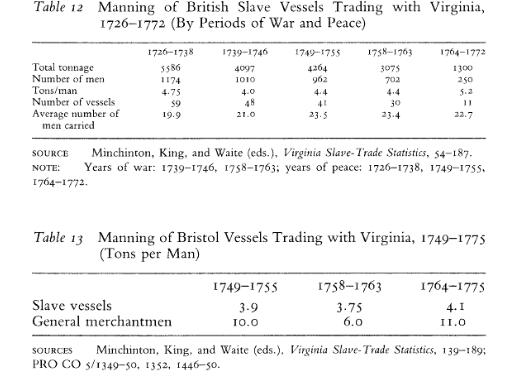 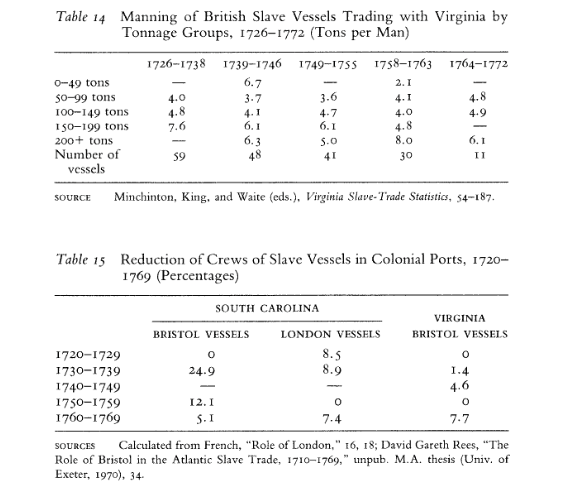 Not the answer you're looking for? Browse other questions tagged colonization trade transportation age-of-sail atlantic-slave-trade or ask your own question.

21
What was the value of the spice trade during the age of exploration?
9
How big was the kapa trade out of Hawaii?
2
What was traded on the Chicago Board of Trade in the mid 1800s?
4
What did the British Empire mean by "Free Trade" in reference to the colonies?
38
What's the rationale for shipping coins back to Spain from its colonies?
6
Was there trade among African empires?
12
Which was the official position of the Catholic Church on the Atlantic Slave Trade?
3
Who on ship was responsible for purchases during the Age of Sail?